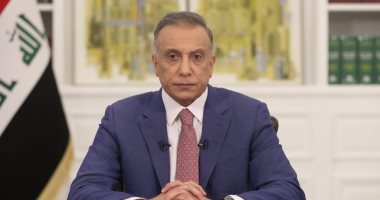 The Prime Minister of Iraq, Mustafa Al-Kazemi, said, "We quickly directed the payment of my salary for two months to all employees after the parliament approved the law to pay the fiscal deficit, according to an urgent news broadcast by Al-Arabiya Al-Hadath channel a short while ago."
Mustafa Al-Kazemi added: We will overcome crises with our confidence in each other and solidarity with the people, government, parliament and political forces.
The Iraqi authorities are trying to keep the security file out of the political file, in conjunction with the comprehensive operations launched by the authorities against terrorist groups, at a time when the Iraqi security services are striking terrorist strongholds and closing inciting websites .

In this context, Iraqi Prime Minister Mustafa Al-Kazemi stressed the need to keep the security file away from political influences to ensure comprehensive stability in the country, and a statement made by the Iraqi Prime Minister's Office, reported by Alsumaria News Channel on Wednesday, clarified that the Commander-in-Chief of the Armed Forces Mustafa Al-Kazemi chaired a meeting of the Ministerial Council For the National Security, during which the security developments in the country were discussed, in addition to discussing the topics on its agenda.

A Kurdish boycott ... and the MPs spoke of a "conspiracy" against the region Yesterday, Thursday, the Iraqi parliament voted by a majority on an emergency bill that allows the government, which suffers from lack of liquidity, to borrow from abroad to finance the delayed salaries of employees and other requirements, within the fiscal deficit of about $ 28 billion, but the representatives approved less than a third of the required amount, To meet the salaries only, while Kurdish blocs boycotted the voting session.
The government of Prime Minister Mustafa Al-Kazemi asked Parliament for a mandate to borrow an amount of 31 trillion Iraqi dinars (about 28 billion US dollars) to finance salaries and many supplies for the next 3 months, but Parliament approved loans of 12 trillion Iraqi dinars (10 billion US dollars) that it deems sufficient. To cover the salaries expenses of about 5 million state employees.
Parliament, due to internal disagreements, failed to approve the draft 2020 budget, and the bill, which was passed quickly, will allow the government to only get enough money until the end of the year. A copy of the law revealed (according to Reuters) that the funds that would be made available would mainly cover the salaries of government employees, food imports and important projects.
Differences emerged during the vote yesterday, as the Kurds opposed passing a clause requiring the Kurdistan Regional Government of Iraq to hand over the region's oil exports revenues as a condition for receiving its monthly share of the new financing plan.
Kurdish lawmakers say their share should not be linked to oil-related problems between the region and the central government in Baghdad.
But lawmakers, most of them from Shiite blocs and some Sunni representatives, insist that the Kurds should not get their share of emergency funding unless they turn over oil revenues to Baghdad. Lawmakers said most of the Kurdish parliamentarians withdrew from the voting session.
World Bank estimates show that Iraq's economy will shrink 9.7 percent in 2020 due to low oil prices and the Corona pandemic in the wake of
Its growth is 4.4 percent in 2019.
In a statement to Al-Sharq al-Awsat, Shaker Hamed, the spokesman for the Iraqi Parliament Speaker, affirmed that «the continuation of the Parliament sessions without interruption from Wednesday noon until Thursday dawn confirms the Council’s insistence to vote on the borrowing law to enable the government to pay its obligations during the months. The third of the current year, the most important of which is the payment of salaries of state employees and social protection networks, in addition to the inclusion of the borrowing law for the rights of contract workers and daily wages in many state institutions and the disbursement of their dues, and everything related to the citizen’s livelihood in addition to investment projects, regional development, the ration card and all service projects.
The official spokesman added, “The council’s efforts and consultations, which lasted more than twenty hours in an unprecedented precedent for the Council’s work, culminated in a vote on the government's request to borrow,” indicating that “there are differences regarding the state not restricting the state to loans and maintaining the optimal use of resources, whether from selling oil. And multiple national resources throughout the country, and push the government to present the budget in 2021 without debts in the coming years, and that the borrowing be in accordance with the main and governing needs in the state’s path to fill the deficit in the operational and investment budget ».
In addition, the head of the Kurdistan Democratic Party (KDP) bloc in the Iraqi parliament, Vian Sabri, accused the Shiite blocs of dealing racist with the Kurds. Sabri said in a statement that the proposal contains a text of a law that is not in the interest of the Kurdistan region. She pointed out that "there is a conspiracy hatched against the Kurdistan region by the parliamentary blocs, especially the Shiites, which voted on the unfair proposal against the region, as the deficit financing law was passed with racist whims."
Sabri explained, "We participated in the session based on promises from Parliament Speaker Muhammad al-Halbousi and a number of other deputies to postpone the paragraph on the Kurdistan region in the law on financing the fiscal deficit, but we were surprised by the presentation of the article to vote and the launching of abuses that affect the Kurdistan region by some representatives, which prompted us to leave the room."
Regarding the paragraph on the region’s share, Sabri said that “the region’s share was supposed to be determined according to the 2019 budget due to the absence of the new budget yet,” indicating that “the objection was entirely by the Shiite blocs and the demand was made to oblige the Kurdistan region to hand over agreed oil imports to Baghdad to Baghdad. Another part of the non-oil imports and the legal liability of the abstaining party, as the Kurdistan region will not be handed over a share of the budget if the imports agreed upon with the federal government are not delivered to him.
For his part, the representative of the Al-Fateh Alliance, Ahmed Al-Kanani, confirmed that the government of Prime Minister Mustafa Al-Kazemi had failed to bring the parliament into a confrontation with the street by delaying the payment of employees' salaries.
"The salaries of employees are a red line that can not be compromised or the risk of delaying the payment of monthly salaries," Al-Kinani said in a press statement yesterday. He added, "Al-Kazemi's listening to his advisers will land him in a big problem, especially economic problems."

Similar topics
» The House of Representatives begins the new legislative session next Saturday
» A letter open to the Prime Minister of Iraq, his people and his economy first
» Abdul-Mahdi: I will lift the parliament request for my resignation
»  MP Hanan al close to the former prime minister, gathered 51 signatures to impeach the prime minister on the implementation of the government's reform paper.
» Saw the first prime minister in Iraq to walk among the Iraqis and with him the protection of two people only (Alwa al-Rashid)

Page 1 of 1
Permissions in this forum:
You cannot reply to topics in this forum
Who is online?
In total there are 68 users online :: 2 Registered, 0 Hidden and 66 Guests :: 2 Bots