Iran begins deleting zeros from its currency and a new banknote

Iran begins deleting zeros from its currency and a new banknote 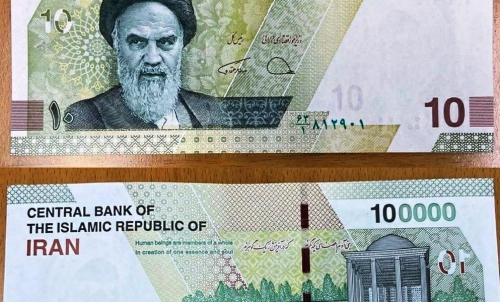 [rtl][Follow-up_in][/rtl]
[rtl]
The Central Bank of the Islamic Republic of Iran issued a new banknote of 100,000 riyals (equivalent to ten thousand tomans), where 4 zeros were printed in a light color in preparation for removing these zeros from the currency, as well as the number 10 drawer at the two sides at the bottom of the paper Cash.[/rtl]

[rtl]Fars News Agency reported that the Central Bank of Iran recently issued a new banknote in the denomination of 100,000 riyals (10 thousand tomans), as it contained some differences with the paper currencies of this currently widespread category.[/rtl]
[rtl]
The most important of these changes is the printing of 4 zeros of the five zeros in a light color, in preparation for deleting the four zeros from Iranian currencies.[/rtl]
[rtl]
The number 10 is also included on the left and right sides of the banknote. As well as behind the banknote.[/rtl]


[size=89]The Central Bank of Iran circulated a new 100,000-rial banknote with four zeroes having a light color signifying the CBI's plan to remove four zeros from the national currency.[/size]

According to the state-owned news agency, IRNA, the new banknote has been printed in new dimensions and with improved security features.

The CBI has said it has plans to redenominate the rial by shaving off four zeros and changing the monetary unit from the rial to the popularly used ‘toman’.

As part of rules under the ‘Reforming Monetary and Banking Law’ passed in May "Iran’s currency unit will be toman and each toman will be worth 10,000 rials and 100 qerans”.

The law stipulates a maximum two-year “transitional period” during which both the toman and rial will be legal tender.

The CBI's governor Abdolnasser Hemmati has publicly defended the change. Addressing lawmakers earlier, Hemmati said, “the rial has lost its reason for being and the toman has become the norm.”

Proponents of the plan argue that lopping off four zeros is necessary given the diminishing value and prestige of the devalued national currency.

Caption: The new banknote has been printed in new dimensions and with improved security features.

Similar topics
» Guru Jeff: " "Deleting the zeros" could mean deleting zeros off of the physical note themselves or off the rate" 12/2/20
» Currency 365 -- Iran New Lop Banknote & Return of US Lockdowns
» Deleting the 3 zeros
» Deleting the Zeros
» 9-14-11: Is It Time - Deleting Three Zeros From the Iraqi Currency

Page 1 of 1
Permissions in this forum:
You cannot reply to topics in this forum
Who is online?
In total there are 59 users online :: 1 Registered, 0 Hidden and 58 Guests :: 4 Bots