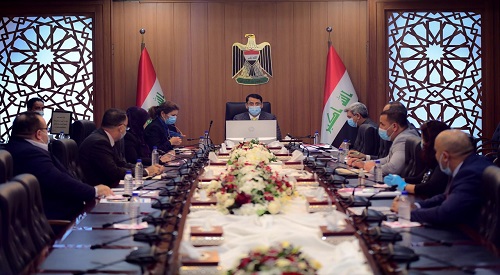 The General Secretariat of the Council of Ministers discussed the achievements of the Diwaniya Order No. (6 of 2017) committee related to following up the investment projects that were lagging during the previous period of its work in coordination with the relevant authorities.

The Secretary-General of the Council of Ministers, Mr. Hamid Naim Al-Ghazi confirmed that the committee enjoyed great support through the powers that enabled it to diagnose the most important obstacles that faced the investment file in Iraq after it resulted in direct meetings between representatives of sectoral authorities and investors with the aim of bypassing red tape and bureaucracy, to shorten the effort and time.

The Secretary-General of the Council of Ministers indicated that the committee had accomplished (80%) of the stalled projects, by bypassing the belongings between investors and sectoral entities, and held until today's session (102) sessions, during which it issued (905) recommendations that dealt with the most important obstacles to investment, which adopted the highest degree of professionalism And quality, during which it handled (444) projects.

And he indicated that the committee has adopted a unified and frequent work methodology and is working on preparing a new work system for investment and musataha purposes, provided that the applicable regulations and instructions are taken into consideration by unifying them with a system that avoids obstacles and problems.

The meeting was attended by the President of the National Investment Commission and representatives of the ministries of construction, housing, municipalities, public works, electricity and finance.


General Secretariat for the Council of Ministers
4 / November / 2020