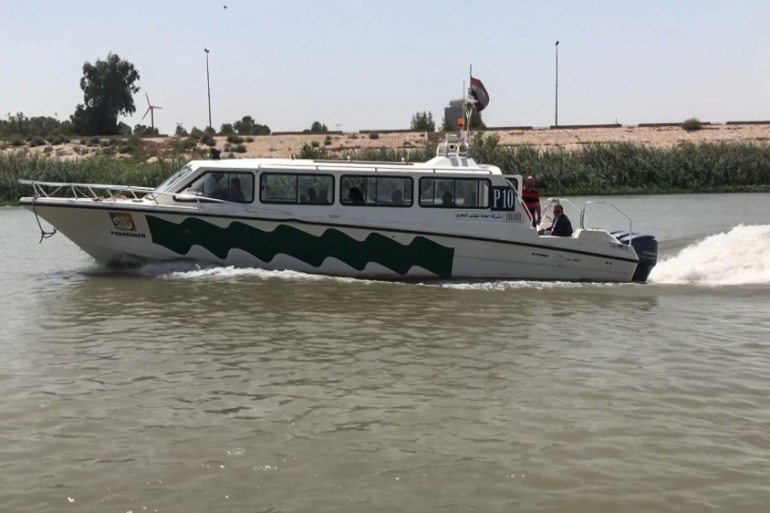 In 2018, the Baghdadi were pleased with the announcement by the Iraqi Ministry of Transport of a river line inside the capital, especially as it would reduce the travel time between areas of Baghdad that witness heavy traffic congestion, and video clips showed the start of work, but it only lasted for one day after the security authorities decided to stop it, because it passes In front of vital facilities and the Green Zone, which includes the headquarters of the Iraqi government and its security ministries and foreign embassies, especially the US embassy, ​​which is located directly on the shores of the Tigris.

This also happened in March 2015, when the Iraqi Ministry of Transport tried to initially launch the project, but it collided with what it called "security obstructions" by government agencies at the time.

It seems that this case may be the most important problem that may hinder its resumption in specific areas of the capital, which are in need of it to reduce the traffic flow, especially near the state institutions and the center of the capital.


The river taxi will be activated soon

It seems that the Iraqi Minister of Transport, Nasser Al-Shibli, has a tendency to move the file of this vital project through his statement that the river taxi will be activated during the next few years, and he talked about the existence of companies that will participate in operating it.

In a statement to the official Iraqi News Agency, Al-Shibli explained that the ministry had directed the resumption of the project soon, and expressed his hope that it would launch in Baghdad and Basra, to include later all Iraqi cities.

The revival of movement across the Tigris River and the use of the means of transportation for ancestors came after the severe congestion witnessed in the capital, Baghdad, especially since what is used in the river now to move around is simple boats, and to a limited extent, used to cross both banks of the river, or what is called the Karkh and Rusafa side of Baghdad. .

The government move was welcomed by the Iraqi Council of Representatives, which considered that implementing the idea was to attract tourists to Baghdad.


A step to activate river tourism

The head of the Parliamentary Services and Reconstruction Committee, Walid Abdul-Hussein, says, "The river taxi is in place in all countries of the world, and it is very important, and it will contribute to reducing congestion and alleviating traffic congestion inside Baghdad."

Starting work on this vital project in Baghdad requires some approvals before its launch, according to Abdul Hussein, who indicated that its application in other governorates, such as Basra, for example, is unlikely before it enters service in the capital.

Not stopping the project again, and the possibility of developing it, are two matters that depend on the coordination that the Ministry of Transport will conduct with the security services, and obtaining the necessary approvals to run it without obstacles, and at the same time not affect the security of the important facilities located on the banks of the Tigris River, as well as ensuring the safety of those traveling through the river.

For its part, the Iraqi Forces' Joint Operations Command stated that its mission is to secure vital targets such as embassies, airports, banks, and economic centers, to prevent a security breach.

"The project has an important economic aspect, and the government has its vision in this matter, and we are one of its arms, and we will respond to what it will decide," said Major General Tahseen Al-Khafaji, spokesman for the Joint Operations Command, adding that the security services will coordinate in an integrated manner with the Ministry of Transport if the project is implemented. .

Since 2010, investment companies have begun to establish some restaurants and parks on both sides of the river, especially since according to the established plans, the river taxi is supposed to complement these facilities, in addition to being a means of transportation.

Economic analyst Hazem Hadi believes that "this idea will enhance the prosperity of economic and tourism movement on the banks of the rivers, and reduce congestion in large cities, including Baghdad," adding that "transportation across the river will protect the environment from pollution, and it is a method used for transportation and tourism in many countries. The European Union, especially in the Netherlands, but its activation requires the establishment of some tourist facilities on the banks of rivers, in order for tourism to flourish in the capital. "

Similar topics
» File a lawsuit against the investor of the river taxi project
»  Transport is preparing to operate the river taxi from Basra to Khorramshahr
» Transportation announces a plan to activate the method of «transit» across the territory of Iraq to attract foreign vessels
» Secretary-General of the Council of Ministers meets with a number of diplomatic missions in Iraq and welcomes the support of friendly countries to restore stability of liberated cities
» parliament is sending a shocking news: the Iraqi government does not have a plan to supply electricity in the summer