» Report on the completion of training for graduate students within the initiative of the Central Bank ... To view, click here

2- (1734) applications were received and after being sorted according to (specialization, graduation year), the number became (1576) applications, then it was completed.
(Priority application) to be trained within this initiative.

Selection process for (600) graduates according to

3- Divide the names of the graduates who have been selected (paragraph 2 above) into lists for the purpose of preparing them to participate in the courses
After the interview with them and in the form of meals.

1- The training period for one session is (15) working days, of which (10) days are allocated for theoretical training and (5) days for training
Practical work in the banks that have been identified in coordination with the (Banking Control Department).

2- Print the participation certificates for this initiative and within the exchange powers assigned to the center's general manager
Studies.

3- Preparing a special evaluation form to express the opinion of the trainees (graduates) about this initiative and their observations and suggestions that
have found.

4- Preparing lists of the names of the lecturing professors after approaching the bank’s departments and divisions to nominate the professors in accordance with
As for the lecturers from the Central Bank, as is the case with regard to the specific requirements and contact with them and their departments
For external lecturers (from entities outside the Central Bank).
For the purpose of documenting and providing data on

5- Create a record on the (EXCEL) application to save the trainees' data electronically
Trainees when needed.

6- Two working groups were assigned from the center's staff, according to internal orders, the first, to follow up the performance of the test at the end of each session
And follow up the examination books, and the second is to follow up the trainees during their application period in banks.

1- Three courses were implemented during the second half of the year / 2018, the first in July and the second in October

The first and third in January, during which the importance of the initiative and the requirements for adhering to the course were clarified, and an emphasis was placed on
The date of the course, but when the date set for the first session began, only (29) participants were enrolled, and so is the case

As for the other two sessions, 23 participants were enrolled in the second and third courses each, to be the total number

For the participants (75) graduates, and for the year 2019, two courses have been implemented, while the third session has been postponed for the beginning of the current year
Because of the events that the country has gone through, a total of (84) graduates (40) participated in these three courses

The first course in April and (23) graduates for the second session in September and (21) participants for the last session in January.

2- A total of (159) graduates have been trained for several reasons, including:

 Some of them get private job opportunities and then apologize for joining the course.

 Difficulty inferring a means of communication or because most of the mobile phones given to the center have been switched off
When applying.

 Some apologies for personal reasons.

 Because of the events related to the demonstrations (at the time) in the country and the difficulty of entering the center building.

3- Topics on which the graduates were trained:
* Legal central bank and banks.

Preparations and procedures accompanying the implementation of the training course

1- Preparing official books to the affiliation bodies of the lecturers.

2- Preparing the training hall and preparing it with all the requirements for setting up the course.

3- Distributing the questionnaire forms to the participants.

4- Examining the trainees at the end of the course.

6- Preparing reports by the trainees on the extent of their benefit from working in the banks in which they applied and who
Then these reports are evaluated by the team assigned by the center's staff.

7- After the practical application period ends, a date will be set for the participants to distribute certificates of participation with the evaluations that are made
They obtained it, documenting this in group photos and publishing it on the official website of the Central Bank.

1) The number of participants in these courses reached (159) trainees.

2 - The number of banks that participated in the training reached (10) in addition to the Iraqi Private Banks Association.

3) The number of lecturers reached (22) from inside the Central Bank and (10) from outside the bank.

4) A number of participants were appointed in some private banks.

5. At the end of the course, letters of thanks and appreciation were prepared for the lecturers and banks that participated in the training. 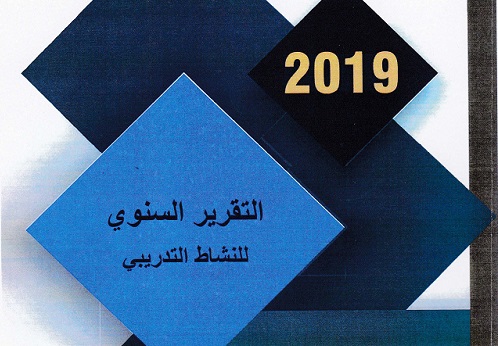 » The annual report of the training activities of the Center for Banking Studies 2019..for view, click here

Page 1 of 1
Permissions in this forum:
You cannot reply to topics in this forum
Who is online?
In total there are 53 users online :: 0 Registered, 0 Hidden and 53 Guests :: 2 Bots