Does the "white paper" stop the collapse of the Iraqi economy?

Does the "white paper" stop the collapse of the Iraqi economy? 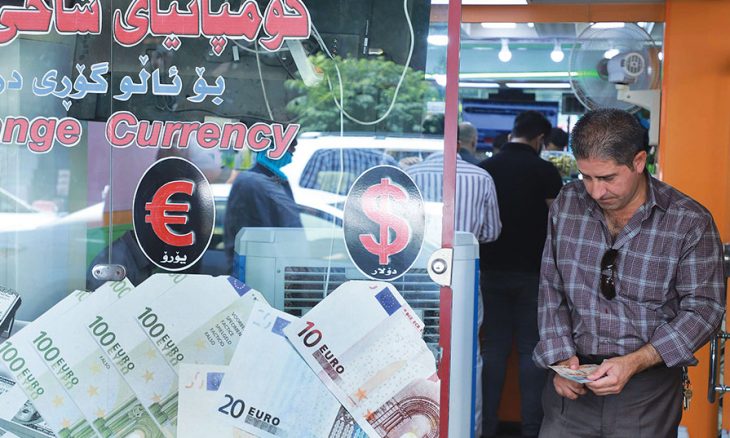 Baghdad - “Al-Quds Al-Arabi”: Amid real risks threatening the collapse of the Iraqi economy as a result of reduced oil resources, the accumulation of debts and government expenditures, and the spread of corruption, the Iraqi government proposed an initiative to save the economy by presenting a reform paper called the “White Paper” amid the possibility that the attempt failed due to its conflict with the interests of the power parties Despite the existence of a local and international agreement, in conjunction with international expectations of the worst deficit that Iraq is going through in the region.

Perhaps the most prominent indicator of the depth of the Iraqi economy’s crisis is the latest International Monetary Fund report, which expected that Iraq's budget deficit would reach 22 percent of GDP, indicating that "the economy may contract by up to 10 percent" back "the deficit in Iraq, The worst in the Middle East and North Africa.

To contain the crisis, the Council of Ministers approved the "white paper" for economic and financial reform, to be submitted to the House of Representatives and approved as an urgent necessity to confront the complex financial crisis in Iraq.

Prime Minister Mustafa Al-Kazemi, and to ensure the availability of success opportunities for his white paper, presented it to the political forces, returning it to "a draft solution to the chronic economic management crisis, as a result of complete dependence on oil and not diversifying sources of income," according to his statement, considering that "the white paper represents the beginning of economic reform." “.

The strange thing is that Al-Kazemi announced, “the interaction of political forces with the paper and its proposals in a manner that reflects a responsibility towards our people that deserves praise!” Even though the Iraqis know well the way the power parties express their approval of reforms in public, and work to thwart them in secret, to preserve their achieved financial gains.

Finance Minister Ali Abdul-Amir Allawi admitted in a press conference, that the country “faces dangerous repercussions and the white paper is a reform road map now and for subsequent budgets,” revealing that “Iraq's annual imports are estimated at $ 60 billion, and that Iraq has international and regional commitments related to trade agreements.” Oil revenues are insufficient to cover salaries and retirement requirements, ”stressing the importance of“ working to diversify revenues. ”

The past two months revealed the level of deterioration in financial conditions, which is occurring for the first time in the history of Iraq, when the government was unable to pay the salaries of employees and stopped government investment spending in all its forms, with the expected continuation of the crisis until the end of the current and next year. Faced with this reality, the Kazemi government asked Parliament to allow more loans.

The Finance Committee in Parliament held several meetings for the purpose of discussing the law on financing the fiscal deficit, while deputies in the committee stated that the loan amount requested by the government is very large, with expectations that Parliament will approve a loan of 10 trillion to pay the salaries of the remaining three months of the current year.

Politicians, MPs, and economic researchers have criticized the government's policy of requesting more loans to cover its expenses, without taking decisive measures to reform the economy in correct ways, considering it a patchwork policy and warning against the increasing size of Iraq's debts, which reached about $ 135 billion, and the benefits that it entails, that it will bear. Iraqi citizen now and in the future.

Among the features of the confusion of financial policy in Iraq is the absence of a budget for 2020 so far due to the struggle of political forces over the privileges and the rejection of the necessary reforms, which is an anomaly that has no parallel except in failed countries.

Member of the Finance Committee, Ahmed Hajj Rashid, admitted that “the economic situation in Iraq is deteriorating and flabby,” excluding that “there will be a budget for this year due to lack of time,” indicating that “the proposed 2020 budget contains a deficit of 50 trillion dinars, and it is still with the government, and it has not been submitted to Parliament.” .

Corruption is the basis of the economy's collapse

Although there are many reasons behind the deterioration of the Iraqi economy to the brink of total collapse, corruption and the systematic plunder of the country's wealth was and still is the first factor.

A spokeswoman for the victory coalition, Ayat Muzaffar, said that "the white paper came late," indicating the absence of political will to reform the economic and political system, indicating that "the blessing of the political blocs for the paper is one thing and implementation is another." She explained, "The country no longer needs medicine, but rather the removal of (rotten) organs and replacing them with active members that restore vitality to the state's body."

In a related context, the head of the Change Bloc in the House of Representatives, Yusuf Muhammad, revealed the existence of important judicial and banking documents on smuggling Iraqi funds abroad through the spoilers, including funds from the Kurdistan Region of Iraq, expected to reach tens of billions of dollars.

"It is imperative that the authorities take strict measures against the corrupt and stop the drain of Iraqi funds through corruption, in parallel with applying what is found in the white economic reform paper," Muhammad said in a statement.

He added that the financial situation in the country requires difficult and bitter decisions in restructuring the economy, stressing that there is no value to those reforms without there being decisive measures to fight corruption.

As for the head of the Iraqi Business Council, Dawood Abd Zayer, he confirmed in a television interview that 90 percent of the state’s resources go into the pockets of the corrupt after 2003, pointing to examples of corruption, including contracts for licenses of international oil companies, which he described as the largest corruption deal in the world, and the currency sale window. The difficult situation in the Central Bank, which operates without legal legislation, and is full of breaches, corruption and thefts, in addition to the electricity crisis, which it considered contrived by the corrupt, indicating that the corrupt in the Ministry of Oil prevented the Ministry of Electricity from supplying gas in order to steal approximately 3 trillion dinars annually.

In the context of corruption, too, deputies emphasized that about a quarter of the salaries in the budget go to non-existent (alien) and double-salary employees, who number about 160,000, and that the government is unable to stop them because most of them belong to the power parties and militias.

It is reported that the Central Bank of Iraq is selling dollars in a "hard currency auction" under the justification of supporting traders to import goods, while the beneficiaries are banks and commercial companies affiliated with parties, militias and some neighboring countries. Despite the attempt by the Kazemi government to stop the currency auction, pressure from the parties forced the Central Bank to back down and reopen the auction.

MP Muhammad al-Darraji, confirmed that “the total of what was sold of the dollar in the hard currency auction at the Central Bank for the period from 1/1/2020 to 1/9/2020 amounts to 27 billion dollars,” revealing that “there are political parties that have interests in the currency auction and not You want to cancel it, ”he says.

Perhaps the most prominent negative consequences of financial mismanagement in Iraq are the continuous rise in poverty and unemployment.

On 1 July, the Ministry of Labor and Social Affairs revealed the increasing poverty rate in the country due to the Corona pandemic and the drop in oil prices.

The Minister of Labor and Social Affairs, Adel Al-Rikabi, said that “and following the spread of the Corona virus throughout the countries of the world, which led to a decrease in oil prices globally, the matter negatively affected the increase in the poverty rate in the country, as it increased from 22 to 34 percent.” Al-Rikabi said, "The ministry seeks to overcome the crisis through cooperation with various international bodies, such as the World Bank and the International Labor Organization, to find quick solutions to increase poverty and unemployment rates."

In fact, observers and Iraqis in general are aware that the strange contradiction between the enormous economic resources of Iraq in exchange for the deterioration of the country's economy, fiscal deficit, the spread of poverty and unemployment, is due to the failed management of the country's wealth and the power parties struggle to plunder as much of this wealth for their benefit, in addition to the exploitation of some neighboring countries of chaos to benefit Of the wealth of Iraq, in cooperation with powerful political forces in power.

Consequently, strong doubts arise about the chances of success of the "white paper" presented by Al-Kazemi, or any other initiative, to reform the deteriorating financial situation, because on its way it will face various obstacles to prevent implementation by representatives of the parties of the power controlling Parliament, which are not served by the reforms that will deprive them of Huge financial resources reaped from the wealth of Iraq, and thus it seems unlikely that the Al-Kazemi project will be able to achieve any positive results that contribute to saving the Iraqi economy from the inevitable deterioration.

Page 1 of 1
Permissions in this forum:
You cannot reply to topics in this forum
Who is online?
In total there are 45 users online :: 0 Registered, 0 Hidden and 45 Guests :: 4 Bots