The backlash against “forever wars” is no reason to abandon Iraq. Just don’t measure U.S. engagement by the number of troops.

This article is part of Election 2020: What We’re Missing, FP’s series of daily takes by leading global thinkers on the most important foreign-policy issues not being talked about during the presidential election campaign. 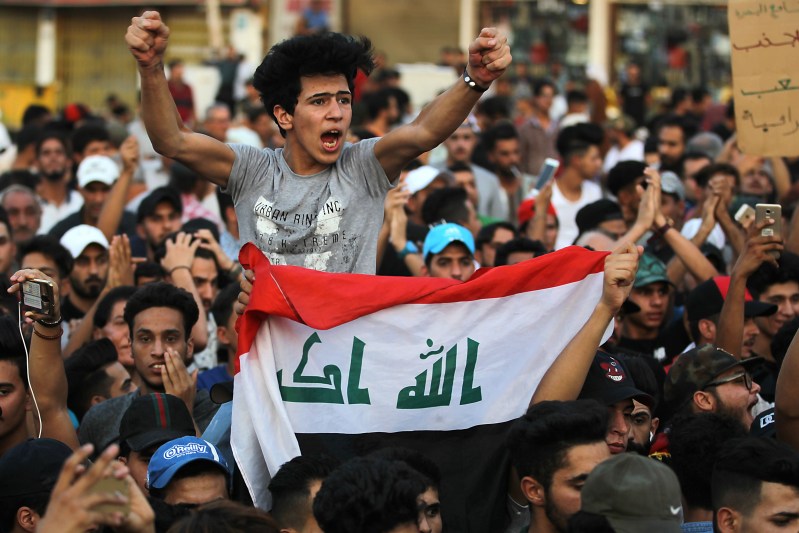 Iraqis demonstrate against corruption and lack of services on Sept. 7, 2018, in Tahrir Square in central Baghdad. AHMAD AL-RUBAYE/AFP VIA GETTY IMAGES

One critical foreign policy issue that has been almost entirely absent from the U.S. election debate is Iraq—and with it, the U.S. role in the wider Middle East.

The United States’ place in the world has been greatly shaped over the last 17 years by its presence in Iraq. Former U.S. President George W. Bush oversaw the start of the wars in Afghanistan and Iraq with a set of decisions that made them into “forever wars.” His successor, President Barack Obama, ran on a platform of bringing troops home from Iraq. Most U.S. soldiers were duly withdrawn by December 2011, even as Obama and then-Vice President Joe Biden ignored the ongoing civil strife in the country. But they could not ignore Iraq for long: By 2014, U.S. troops were back in Iraq to fight the Islamic State.

A reengaged United States could provide the political and economic support to sway Baghdad towards the political pluralism and liberal market policies that are needed in the Middle East.

Today, the United States is on course to draw down its troops once again—from 5,200 to 3,000 by the end of this year. No matter who wins the election next week, that number is unlikely to go back up, barring a major development such as the emergence of another international terrorist organization that threatens to destabilize the region.

But there is every reason for Washington to stay engaged in Iraq, provided that this engagement is no longer measured by the number of its troops. Since leading a global coalition to remove Saddam Hussein’s regime in 2003, the United States continues to enjoy great influence in a country that is a linchpin of any U.S. strategy in the Middle East, not least due to the border it shares with Iran, Jordan, Kuwait, Saudi Arabia, Syria, and Turkey. Furthermore, Iraq has one of the world’s largest reserves of hydrocarbons, whose free flow will be essential to global economic growth for years to come.

Iraq matters not only because of its economic and strategic potential, but also because of Iran. For better or worse, U.S. policies towards Iran spill into Iraq. When Washington ramped up sanctions on Iran, Iran increased its economic pressure on Iraq. And if Washington hopes to limit Tehran’s network of militias and armed groups in the region, it must do so in Iraq.

While both U.S. President Donald Trump and Biden have said that they are interested in reaching a deal with Iran, the nature of that deal will impact Iraq. Many Iraqis fear that a Biden administration would seek to revert to the Iranian nuclear agreement without restricting the activities of the Iranian Revolutionary Guard Corps and its proxies in Iraq. Similarly, they fear that a second Trump presidency could see a rush to strike a deal at almost any price that also fails to take Iraq’s fate into account. Both kinds of deals would shortchange Iraq—and the United States’ own strategic interests as well.