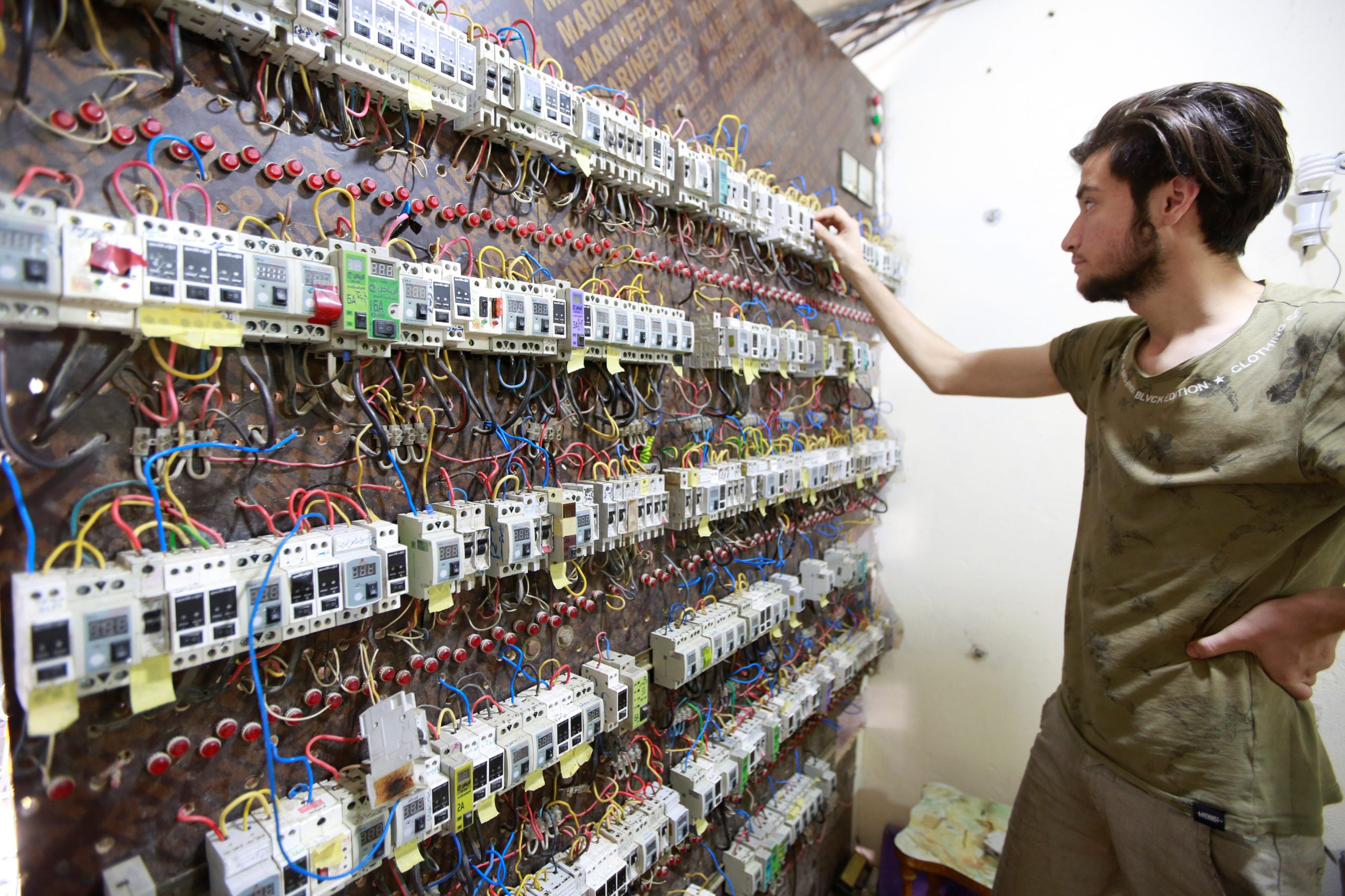 A worker is seen near an electrical generator board, after continuous power outages in Najaf, Iraq June 22, 2019. Picture taken June 22, 2019. REUTERS/Alaa al-Marjani
On October 10, the government of Iraqi Prime Minister Mustafa al-Kadhimi issued a White Paper to reform Iraq’s economy. The energy sector’s future has taken considerable space in the blueprint alongside the country’s increasing demand for electricity. The paper lists the Iraqi government’s plan for the next three to five years, with an effort to satisfy the gap between demand and supply which has mushroomed to 10.1 gigawatts in 2019—more than one-third of the country’s supply of electricity. The seven bullet points of technical and administrative measures for the government primarily aim to improve the efficiency of the electricity sector’s production, transmission, and distribution, including the formation of a regulatory mechanism to monitor its performance.

Since the popular protests in October 2019, the staggering drop in oil prices, and the COVID-19 pandemic, the electricity supply in the summer months has roundly deteriorated. The political instability following the resignation of former Prime Minister Adel Abdul-Mahdi led to a halt in most projects and a significant decline in the Electricity Ministry’s ability to carry out maintenance activities. The results have amounted to significant power cuts in many parts of the country, especially in July, when demand was at its peak due to the summer heat. This sparked massive protests in several provinces, particularly in the south, where temperatures can soar to above 130 degrees Fahrenheit.

Iraq’s rapid population increase by one million annually is mainly blamed for the rise in demand for electricity. Despite large investments in equipment and networks, Iraq has not been able to keep up with the demands for new supply connections and upgrades to existing infrastructure. The Iraq Energy Institute, a think tank, estimates that Iraq would require $40 billion in investment for the electricity sector to achieve the stated goal of full 24/7 electrification by 2030. The private sector would most likely have to account for a significant share of that investment. Strong government institutional capacities and a favorable investment climate are the likely preconditions for private investment to step in.

While the White Paper has a detailed plan to develop the electricity sector, with emphasis on generating more electricity and improving billing and collection, the core issue of the electricity shortage lies in the distribution sector, where several factors—among those transmission and distribution line losses, theft, tampering—are stagnating more than 58 percent of the generation capacity. The government-owned distribution companies have enjoyed a local geographic natural monopoly—which include the north, south, Middle Euphrates, and Baghdad—from the beginning. For the electricity sector to become operationalized as a commercial entity—which is currently missing in the electricity network structure—a competitive retail business should be introduced.

Iraq’s current regulatory framework is insufficient to support the development and liberalization of the electricity retail business. Besides, the sector needs the Iraqi parliament to legislate several new laws for introducing roof-top solar energy, energy efficiency for households, and net metering to allow distributed generation customers to sell excess electricity at a retail rate and receive credit on their electricity bill. This credit would offset customer’s electricity consumption during the low season and reduce the amount of electricity consumers are currently purchasing from the distribution companies.

The government has already corporatized its production, transmission, and distribution entities after an Electricity Law was passed in 2017. But, in effect, the companies exist in name only and have not been operationalized. Although employees have been transferred to these companies, typical company operations have yet to be implemented. Rather, they have only performed a rudimentary set of administrative functions, such as providing monthly expenditure summaries to the Electricity Ministry without producing company accounts or raising capital for investment. Hence, the Iraqi government needs to immediately start to value the state-owned companies, record their liabilities, plan the rescheduling of their debt, implement financing criteria including a self-financing ratio, and transfer financial, planning, and greater administrative functions from the government departments. There have been delays in the process of implementing corporatization due to policy uncertainties and political sensitives around the issue of privatization. Any future corporatization road map will need to ensure that corporate governance and privatization are separate issues.

Simultaneously, the Iraqi government needs to establish an electricity regulator and wholesale market to facilitate the financial transactions between the generation and distribution/retail companies. Any reform of the electricity sector will eventually witness a change in asset ownership and a shift towards separating the Iraqi government’s natural monopoly and contestable assets and services in all parts of the energy supply chain. The reform is expected to allow the Iraqi government to maintain current ownership of the transmission and generation services, while the distribution and retail activities will be separated under the ownership of the independent state-owned enterprise (SOEs), local governments, private companies, or community-owned trusts operating within a statutory geographic franchise.

By the end of the reform process, the electricity sector will be separated into two distinct parts. One will include the electricity subsidies that result from below cost pricing, with cost measured as accounting costs. The other will be the contestable part—generation and retail—with mixed government and private ownership. The government is subsidizing the energy sector more than $6.5 million per day. This is an astronomical amount considering the financing needs of other essential sectors such as education and healthcare. The electricity subsidies are provided by the Finance Ministry to essentially reimburse the Electricity Ministry for providing subsidies to its customers. Since 2008, the volume of subsidies and waste from poor revenue collection has exceeded the notional amount of $55.7 billion and has begun to erode the Iraqi government’s capital base during the current economic hardship.

The White Paper mentions that the current electricity tariffs are far from meeting the government objectives in reducing the subsidy. The amount of the subsidy and percentages should be determined based on redistributive criteria that must privilege lower-income populations—approximately 20 percent of Iraq’s total population— rather than the 36 percent of consumers who are currently benefiting from the lifeline tier of 1,500 kWh per month. Iraqis have been primarily concerned with affordability, reliability of supply, and transparency and accountability issues. To be politically acceptable, electricity reform should address each of these issues with a clear plan of action and timeline for successful implementation. Affordability can be addressed in the near term by introducing more effective subsidy mechanisms for low-income households. Furthermore, concrete actions to improve transparency and accountability—especially relating to the billing system—through staff training and grievance redress mechanisms should be provided in an effort to build trust.

The gradual restructuring and increasing of the existing tariff and the elimination of broad subsidies in favor of targeted ones for the most vulnerable will ultimately work to eliminate the sector’s financial deficit and establish a balanced budget. In turn, this would reduce the financial burden on Iraqi citizens caused by the utilization of costly private generators. Hence, the government’s policy for the next period should include a gradual increase in the electricity tariff , where electricity rates slowly approach cost-recovery levels. This requires considerable time to attain the current cost-covering level.

The gradual increase of the tariff should be in conjunction with measurable improvements in the electricity service provision, aiming at the government’s long-promised goal of a sustainable 24/7 electric service. Introducing alternative tariff rate settings along with the implementation of advanced metering schemes will smooth consumption patterns over the course of the day. The tariff setting needs to be continually reviewed to remain in line with the fiscal budget, taking into consideration the diversity in conventional and renewable resources. It shouldn’t be a burden on consumers or the public purse. Rather, it will be used as a flexible tool to enhance equity among various customer groups and provide the necessary revenue for the Electricity Ministry.

The path toward a sustainable electricity supply in Iraq is by no means simple, but a solution certainly exists. Although a number of approaches have been presented in the White Paper to tackle the current issues, all of these reforms will undoubtedly require significant effort and dedication on behalf of the government. Iraq must consider the long-term social, economic, and environmental benefits of the energy sector for its people. Investing in reforming the energy sector today will pave the road toward a secure energy future for tomorrow.

Harry Istepanian is a senior fellow at the Iraq Energy Institute. He has more than thirty-five years of experience in power and water industries in developing countries, including Southeast Asia, the Middle East, New Zealand, and Australia.