The demands are repeated, and the authorities are unable to undertake reforms

The demands are repeated, and the authorities are unable to undertake reforms 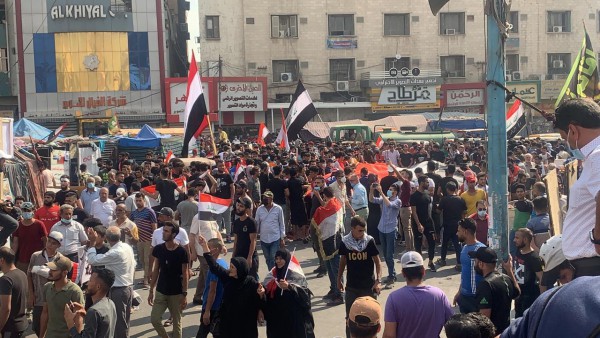 The October Revolution protests return to Baghdad
The demands are repeated, and the authorities are unable to undertake reforms

Baghdad (AFP) - Thousands of Iraqis went out on Sunday to Tahrir Square and the vicinity of the Green Zone where the government is based in Baghdad, to renew their protest against the authorities ’inability to carry out reforms and hold accountable those involved in suppressing the demonstrations that their“ revolution ”has been subjected to since last year.

The protest was renewed Sunday, on the one-year anniversary of this unprecedented popular uprising, despite the repercussions of the tension between Iran and the United States and the spread of the Covid-19 epidemic. "This is an important day, we are here to continue the protests," which began in October 2019, during which about 600 protesters were killed and 30,000 wounded, student Muhammad Ali told AFP from Tahrir Square. "We have the same demands of last year," Ali added, while hundreds of thousands of demonstrators have been holding sit-ins for months in Baghdad and other cities in southern Iraq.

The protesters are calling for improving services, tackling unemployment and combating rampant corruption in Iraq, which is the second producer of black gold in the Organization of Petroleum Exporting Countries (OPEC).

Tahrir Square, the main stronghold of the protests in Baghdad, turned into a village of tents, most of which were covered with pictures of the "martyrs" of the uprising, while demonstrators gathered near the Green Zone, where the headquarters of the government, parliament and the US embassy are located.

For its part, the security forces imposed strict measures, including the deployment of forces since Saturday night, in central Baghdad, which prevented countries from approaching cars or vehicles from Tahrir Square and the bridges leading to the Green Zone, and riot control forces deployed behind thick transparent shields to prevent the spread of demonstrators waving flags The protest activists appeared divided: Some believe that Tahrir Square is the only safe place for protesters to gather, while others have gone near the Green Zone, on the second side of Baghdad.

The protests sparked on October 1, 2019, which began spontaneously criticizing unemployment and poor public services And the rampant corruption and political class that the protesters see as more loyal to Iran or the United States than to the Iraqi people.The Minister of Planning, Khaled Battal Al-Najm, arrived in Najaf Governorate, heading a high-level government delegation, with the aim of examining the service reality, identifying the province's needs of vital projects, and diagnosing the reasons behind the delay in projects.

A statement received by (Al-Zaman) yesterday said that (the minister during his presidency of the expanded meeting that included the head of the Office of Financial Supervision, the head of the coordination body and the Undersecretary of the Ministry of Interior with the governor of Najaf, Luay al-Yasiri and his two deputies, the district chiefs, directors of departments and administrative units, university heads, police directors and the commander of the province's operations), indicating Until (the aim of the visit is to diagnose the problems and obstacles that hinder the work of the province and its various departments to find solutions to them). He added that (the Ministry of Planning is working to harmonize the plans of the provinces with the five-year national development plan in order to be responsive to the challenges faced by the projects).

In addition, the minister met with members of the House of Representatives from the province of Najaf, and discussed with them the mechanisms of cooperation between the executive and legislative authorities in a way that improves the level of government performance and enhances the service reality in the governorate. He also met tribal leaders, dignitaries, representatives of civil society organizations, and various social and economic activities in the province