After a suicide or assassination of the director of the company responsible for its implementation .. Who is obstructing the Iraqi port of Faw?

After a suicide or assassination of the director of the company responsible for its implementation .. Who is obstructing the Iraqi port of Faw? 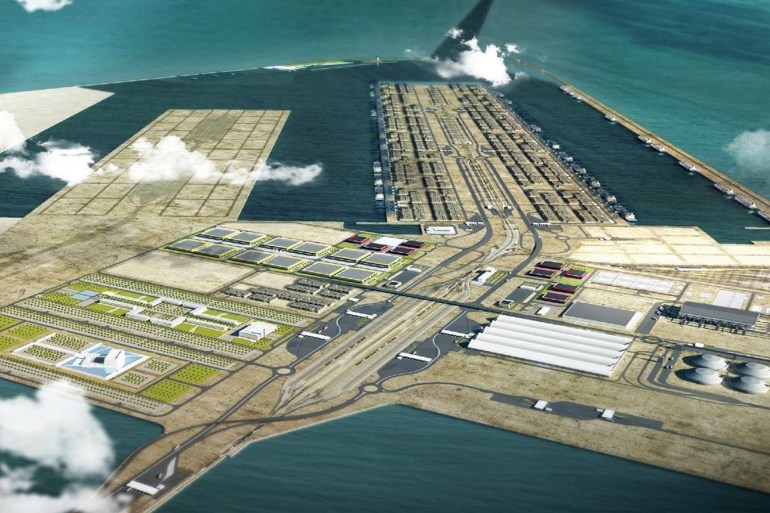 The large port of Faw in Basra Governorate, southern Iraq, is expected to be the largest economic tributary to the country and the strategic axis of the economic renaissance, as it is supposed to link the continents of Asia and Europe to transport goods, but it has not yet seen the light, despite the fact that its foundation stone was laid in April 2010.

The prospective port would change the maritime transport map as it makes its way in the sea away from the Kuwaiti and Iranian ports, and its initial production capacity is expected to range between 20 and 45 million tons per year, but the project faces a paralysis in completing the planned berths.

The length of the breakwater port is 16 kilometers, and it is implemented by the Korean company Daewoo, which is currently working on 5 projects, represented by the construction of 5 of the 90 berths, a project to establish a link road between Al-Faw Port and Khor Al-Zubair, the Creek Tunnel project, the canal drilling project, and the port basin drilling project. .

In the middle of this month, observers were surprised by the announcement of Basra Governor Asaad Al-Eidani of the death of Gul Ho Park, director of the South Korean Daewoo Company, which oversees the establishment of the large FAO, indicating that the preliminary results indicate that he committed suicide.

Obstructing the project
and about the project’s obstacles, Major General Dr. Jamal Al-Halbousi, an expert on international borders and waters, explained that economic competition and the acquisition of opportunities, or confining them to each country without considering the region as a whole, or thinking about the logic of regional integration, are all factors that have prompted some neighboring countries to use means of pressure To prevent the completion of the port construction.

Al-Halbousi indicates that there are internal and external parties that seek to obstruct the project, and from the internal authorities those affected by the Silk Road (one road, one domain) and consider it the best for Iraq, and other parties that see their interests in trade exchange through the land border outlets without the accounts of the broader and broader interests of Iraq. They are all factional interests linked to the party abroad.

And about the reason for facing the paralysis project currently, Al-Halbousi explained to Al-Jazeera Net, that this is due to several factors, after laying the foundation stone, there were insufficient financial allocations for the project, and after the defeat of ISIS, the country faced the Corona pandemic and the drop in oil prices, in addition to all this political rivalry The procedure between the ruling blocs.

The Iraqi Maritime Syndicate is one of the institutions that mobilizes the masses to proceed with the construction of the project, and its media spokesperson Ali Salman Al-Oqabi says, "The project is now in its infancy, and work is underway to construct 4 advanced berths for the port to start its work for the first stage, and if the port is to be built according to what is planned, this requires support. Financially. "

Al-Uqabi pointed out that there are Iraqi youth who are ready to volunteer work to complete the large Faw, and said that the port will not be for Iraqi ships only, and that it is built according to high and advanced specifications in order to be able to receive ships with large tonnages, so it is necessary to take into account the accuracy in its completion.

A strategic project. It is expected that the large port of Al-Faw breakwater, if completed, will contribute to a qualitative upgrade for Iraq by adopting a strategic resource other than oil, away from the deployment of pollutants in the air, and emissions of combustion of oil and gas.

Economic expert Dr. Nabil Al-Marsoumi says that "Basra, in the event of the construction of the large port of Faw, and the dry canal could be a transit corridor for transit trade from Basra ports to Europe via Turkey by land through a train network and traffic routes directly to the borders of Turkey, and in another direction from Basra by land. Through a new railway and road network to the Mediterranean ports through Syria, Basra could be an important outlet through the dry canal to transport part of China's trade with the European Union, which exceeds 680 billion euros.

Regarding concerns about the failure of the project, the economist confirms that this may be due to the lack of funding, and the absence of a unified national will to implement the project that fights corruption, and the lack of a security and legal environment will destroy the project.

According to Al-Marsoumi, the exit of the Grand Port of Al-Faw into existence would enable Iraq to be a magnet for commercial ships, as it could provide between 20 to 25 days for the voyage from northern Europe to Southeast Asia through the Suez Canal, thus saving billions of dollars for the global maritime transport economy, As well as reducing transportation, freight and insurance costs, which are estimated at (15%) of the value of goods.

Al-Marsoumi says that the large port of Faw is one of the important strategic sites in the maritime transport network, not only for Iraq, but also for the international economy, because it represents an intermediate location between Europe and Africa on the one hand, and East and Southeast Asia on the other hand, as it may achieve accumulated revenues of up to 100 billion dollars. Within 22 years of its operation.

Similar topics
» Head of Korean firm in Iraq commits suicide
» The Iraqi government discloses the latest developments regarding the implementation of the "Great Port of Faw" project
» Parliamentary: near the launch of a project to establish an FAO port for investment
» Abadi replaces the North Oil director with the start of pumping Kirkuk oil to the Turkish port of Ceyhan
» Transportation: Daewoo is backing from building the Faw port and is demanding additional funds