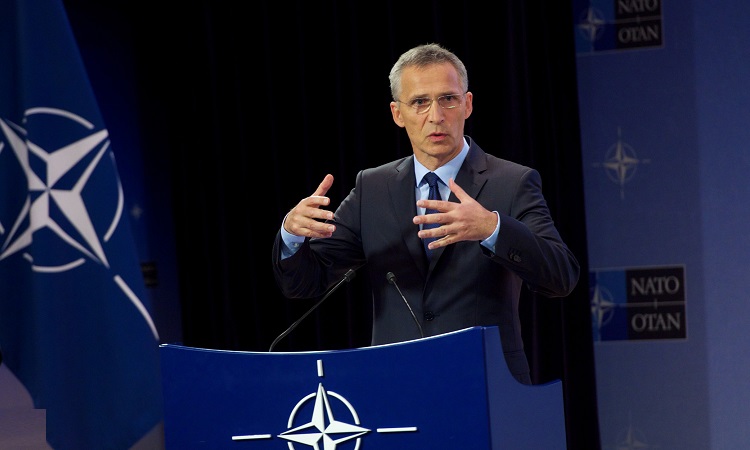 The Secretary-General of NATO, Jens Stoltenberg, announced that the defense ministers of the Alliance countries have entrusted the military leaders in their countries to begin increasing the strength of their forces in Iraq.

Stoltenberg said during a press conference in Brussels, following a meeting of NATO defense ministers via video technology on Friday, that it is "premature to talk about the exact number of the mission personnel after the expansion, but it will be much greater than it is now."

He added, "We are now planning and coordinating the details," noting that a detailed plan to expand the mission in Iraq will be discussed during the next meeting of defense ministers.

He pointed out that due to the Corona epidemic, the number of mission personnel has been reduced, and now the trainers and other personnel have been reinstated, and the mission is now operating at full strength.

NATO Secretary General Jens Stoltenberg briefs media after a meeting of the Alliance's ambassadors over the security situation in the Middle East. (Reuters)

“While the security situation remains challenging, NATO remains committed to stepping up our support,” said Stoltenberg after a two-day defense ministers’ meeting in Brussels.

For all the latest headlines follow our Google News channel online or via the app.

“Our aim is to help build self-sustaining Iraqi forces able to fight terrorism, prevent the return of ISIS, and stabilize their country,” added Stoltenberg, citing a “concerning” rise in the number and sophistication of attacks against international forces in Iraq.

NATO maintains a 500-strong training mission in the country to prepare local forces in the event of attacks from Islamic State extremists.

Stoltenberg said the scope of the mission’s upgrading would be decided at a meeting of alliance defense ministers in February.

Anti-US sentiment spiked anew in Iraq following the January killing of powerful Iranian military commander Major General Qassem Soleimani in a US airstrike near Baghdad, leading to a suspension of NATO training of Iraqi forces.

The Covid-19 pandemic also forced the alliance to dial down numbers earlier this year but the mission has since returned to full capacity, Stoltenberg said.

Turning to Afghanistan, Stoltenberg urged the Taliban to reduce “unacceptable levels of violence” and break ties with violent groups.

But he also betrayed concern over last week’s US announcement that the American troop contingent will be cut to around 2,500 early next year – despite the potential impact on peace negotiations between the Afghan government and Taliban insurgents.

Both sides’ original understanding was that Washington would not fully withdraw prior to a solid deal between the two sides.

“The negotiations in Doha are fragile, but they are the best chance for peace in a generation. And all Afghans should seize this historic opportunity,” said Stoltenberg, cautioning that “the next months are decisive for Afghanistan.

“NATO backs the peace process. And we have adjusted our presence to support it,” scaling its troop presence back to less than 12,000 from more than one hundred thousand.

“We decided to go into Afghanistan together; we will make decisions about future adjustments together; and we will leave together, when the time is right,” Stoltenberg insisted.

Similar topics
» What are the tasks of NATO forces ... and why did they decide to stay in Iraq for the next five years?
» Al-Araji to "NATO": The withdrawal of foreign combat forces helps stabilize Iraq
» An American-Iraqi strategic dialogue: a matter of interests and expectations
» The US ambassador to Iraq: We will not close the embassy in Baghdad and there is no intention to increase the number of our forces
» Iraq provides a briefing at the NATO meeting on the NATO mission in the country