What is behind the escalating and sudden French interest in the northern region of Iraq?

What is behind the escalating and sudden French interest in the northern region of Iraq? 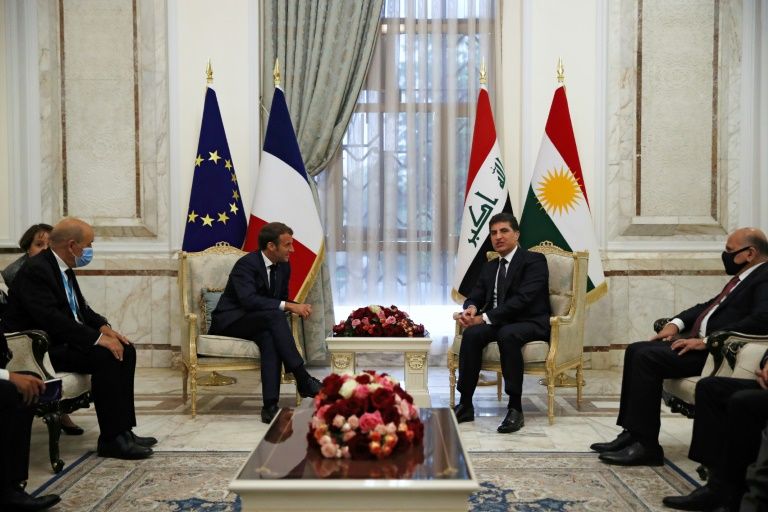 Simultaneously with its entry into the line of tension between Turkey and Greece, France's growing interest in the northern region of Iraq, especially with Erbil, in recent months raises questions about its goals and objectives.


Relations between Paris and Erbil have not witnessed this level of interest from France, since the end of the era of former French President Francois Mitterrand (1995), who played a major role in supporting the UN Security Council imposing a no-fly zone on the three Iraqi Kurdish governorates in 1991 (Erbil, Sulaymaniyah) Duhok), and what came after it pushed the reconciliation project between the two Kurdish parties in Erbil and Sulaymaniyah to end the years-long fighting between them, launch a broad financial, food and health aid program, and provide political cover for Kurdish leaders at the time to move to Europe, which continued until the end of his presidency.


This increased interest by President Emmanuel Macron’s administration raises the fear of political parties in Baghdad, from Paris’s efforts to drag its differences with Ankara to Iraq, through the gates of the northern region of Iraq, specifically the PKK terrorist organization card in which Turkish forces continue their military operations, since about 3 months inside Iraq, within the region, to reduce the military's capabilities.


Despite Paris’s participation in the international coalition, led by Washington, to defeat ISIS, and sending French forces to train the Peshmerga and support the security barrier with Rafale aircraft at the end of 2014 and early 2015, in addition to sending medium and light weapons to Erbil, this support has remained limited to The aspect related to the war on terror only, and humanitarian aid for Iraqi religious minorities affected by the terrorist operations of "ISIS".


Since last July, Erbil has witnessed several high-level visits by French officials, most notably the Minister of Foreign Affairs, Jean-Yves Le Drian, and then the Minister of the French Armies, Florence Parly, at the end of last August, followed by a separate meeting between the President of the region, Nechirvan Barzani and Macron during his visit last month to Baghdad, and he The only meeting that Macron conducted in his visit to Baghdad in isolation, as he held a meeting with the three Iraqi presidencies at the same time, while he devoted about 40 minutes to a one-on-one meeting with Barzani, who came from Erbil to Baghdad specifically for this meeting.


After that, Macron announced an initiative, in cooperation with the United Nations, to support the sovereignty of Iraq, in a clear correction of the Turkish operation inside Iraqi lands. However, this initiative announced by the French President from the Peace Palace in Baghdad was not addressed later, and looked like similar declarations of Iraqi politicians that have no effect on the ground.
Last Thursday, Olivi Dicotini, the French consul in Erbil, held a meeting with the head of the "Kurdistan Democratic Party" Masoud Barzani, during which political files were discussed, according to a statement issued by Barzani's office.


The statement indicated that the latter discussed with the French consul files of common interest, including the current situation and the latest political developments in the region, and the security threat and challenges facing the political process in Iraq were also highlighted. In another part of the meeting, the French consul indicated to continue his country's support for the northern region of Iraq. He also stressed the friendship and bilateral relations between the two sides, according to what was stated in the final statement of the meeting.


A prominent Iraqi politician in Baghdad, who participated in the banquet held by President Barham Salih on the occasion of Macron's visit to Baghdad last month, spoke of France's interest in supporting Erbil more than its support for Baghdad.


"Al-Araby Al-Jadeed" newspaper quoted the politician, who requested anonymity, that Paris finds more political space in the region than in Baghdad, and there are also historical partnerships and relationships between Kurdish leaders and influential circles in Paris that reinforce this. Therefore, France's recent return to the Middle East, with its problems and political conflicts, put the northern region of Iraq at the center of its attention.


He pointed out that a large part of the French activity aims to try to harass Turkey, as he emphasized that the Kurdish leadership is aware of the importance of staying in a gray area and not angering the Turks in this particular file, so the French attempts remain limited and stand at the ceiling of Erbil's desire to remain neutral, as Turkey has papers. In the region more than France, most notably the huge trade and debts on the region in favor of Ankara, as well as the Turkish military presence within the geographical depth of the region. And he considered that Macron has so far failed to attract the Kurds in Iraq to a position that is understood to be against Turkey.
The French Foreign Ministry condemned the Turkish military operations in the northern region of Iraq in mid-August. She described the Turkish shelling on a site north of Erbil, as a "dangerous development."
In the context, a member of the Security and Defense Committee in the Iraqi Council of Representatives, Katie al-Rikabi, considered that Erbil's relationship with Paris must be with the knowledge of the federal Iraqi government in and through Baghdad, and otherwise it is rejected.
He added, "As long as the current relationship between Baghdad and Erbil is almost good, there is no harm in developing relations in northern Iraq with European countries, either if it is without Baghdad's knowledge, it is definitely rejected."


Regarding the possibility of Paris using Erbil as a platform to confront Ankara, Rikabi ruled that out, explaining that "the relationship of the northern region of Iraq and France is old, and Erbil currently wants to arrange its conditions at the level of friendships and armament, and it is illogical to neglect a permanent, economic and geographical relationship with Turkey in order to remain with a temporary relationship." With France. "