The Iraqi leader was appointed in May after mass anti-government protests that rocked the country and pushed former prime minister Adel Abdul Mahdi to resign.

He landed in London late on Tuesday after departing from Berlin, where he held meetings with German Chancellor Angela Merkel and other officials. 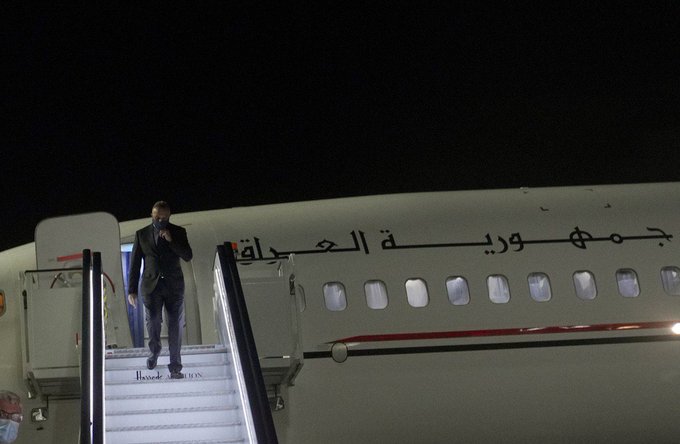 During his visit to Berlin, Mr Al Kadhimi said Germany's support was crucial to his country’s reconstruction work and spoke about his government’s ambitious programme to modernise and rebuild the Iraqi economy.

There are many things that we are seeking co-operation on, such as the issue of refugees and displaced persons, as well as the problem of foreign ISIS fighters, Mr Al Kadhimi said.

Mrs Merkel praised the Iraqi government’s will to reform.

Mr Al Kadhimi is accompanied by a high-level delegation of ministers and officials.

They include the finance, oil, defence and foreign ministers, the governor of the central bank and the head of the investment commission.

Prior to visiting Germany he was in Paris, where he met President Emmanuel Macron and discussed the fight against terrorism.

Mr Macron expressed support for Iraq's sovereignty and highlighted that Baghdad's main challenges were terrorism and foreign interference in its affairs, a reference to Iran.

Mr Macron tweeted a picture of himself and Mr Al Kadhimi and said in Arabic that France would continue to stand by Iraq.
We will defeat evil at its roots. I would like to thank Mustafa Al Kadhimi for reviewing the initiative that we launched together a month after my visit to Baghdad," Mr Macron said.

Similar topics
» Baghdad-Tel-Aviv relations to be discussed in the Iraqi European tour, an Iraqi Politian said
» Iraq's PM Kadhimi takes off for European tour
» After his visit to Washington, Barzani's European tour begins to discuss the issue of arming the Peshmerga
» The brother of "Mowaffak al-Rubaie" arrives in London after the embezzlement of "20" billion dinars from his job
»  A member of the "Progress" leadership: Al-Kazemi's European tour should be used to serve Iraq first