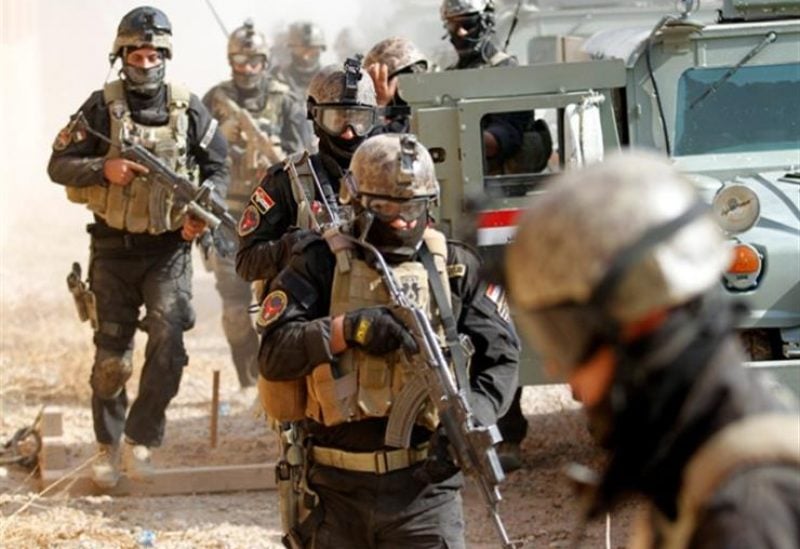 The Federal Police in Iraq announced, on Tuesday, that it has seized various weapons and military equipment as part of the security campaign it launched in the capital, Baghdad, in implementation of the directives of Prime Minister Mustafa Al-Kazemi to impose security.

The intelligence agency said, Based on the directives of the references regarding inspecting the areas from which direct fire could be fired and through the arrival of intelligence information, the Federal Police Intelligence in the Ministry of Interior carried out an intelligence operation in the Al-Amana neighborhood in the Baghdad governorate, which resulted in the seizure of a number of Kalashnikovs, hunting rifles, and various equipment. And a variety of military equipment, including shields, slippers, clothes, scarves and crushers.

It also confirmed that search and search operations are still continuing, according to intelligence information. The seizures were confiscated and handed over to the competent authorities, according to what was reported by the Iraqi News Agency on Telegram.

Burning a Kurdish headquarters ... and a horrific massacre

And on Sunday, security reinforcements arrived at Al-Farhatiya in Salah Al-Din, Iraq, following the horrific crime that killed 8 people, who were killed by bullets in the head and chest.

It is noteworthy that Iraq lives these days on a hot plate. A few days ago, the Iraqi capital, Baghdad, witnessed riots, after a number of supporters of the Popular Mobilization Forces and their loyalists burned the headquarters of the Kurdistan Democratic Party in Baghdad last Saturday.

Hours later, the Iraqi street was terrified to find 8 bodies of Iraqis who had been shot in the head and chest. They were kidnapped with 4 others, while the Prime Minister sent a security delegation to the governorate and ordered the negligent officials to be held accountable.

Major General Yahya Rasool, a spokesman for Prime Minister Al-Kazemi, said, "We will not hesitate to take military action to catch the perpetrators of Balad's crime."

In addition, the country has witnessed, during the past months, several attacks and threats against diplomatic missions and centers housing US forces affiliated with the international coalition.

The rocket attacks escalated alarmingly after Prime Minister Mustafa Al-Kazemi went to the United States last August to complete strategic talks with the US administration.

These attacks, especially those targeting the vicinity of the US embassy in the capital, put pressure on the Al-Kazemi administration, which promised to control armed groups outside the control of the state.

America had issued a warning to Iraq two weeks ago that it would close its embassy in Baghdad if the Iraqi government did not move to stop the Iranian-backed militia attacks against the Americans.

Washington often holds armed groups and militias affiliated with the Hashd, backed by Iran, responsible for such attacks.

Iraq .. The Federal Police kills a terrorist while trying to plant an explosive device in Kirkuk .. Kitchen Akhbar Al Youm 10/20

The Media Office of the Federal Police Force Command announced, on Tuesday, that a force from the Fifth Division of the Federal Police managed to kill a terrorist, while trying to plant an explosive device in Kirkuk on the road linking it with Salah al-Din near "the village of Mahdia" in the Rashad district of Kirkuk.

According to the statement issued by the Iraqi Federal Police, the terrorist intended to detonate it to target civilians and the security forces present in the area.

It is noteworthy that the Iraqi armed forces announced, on Monday, the arrest of two brothers belonging to the " ISIS " organization during a security operation in the west of the country, as well as the dismantling of a terrorist network in Salah al-Din Governorate, northern  Iraq .

It is noteworthy that the Iraqi army and federal police forces continue to launch intense security operations in the north, northwest and south of Iraq, with the aim of pursuing the remnants of ISIS terrorists and the security escapees.

Similar topics
» IED dismantled, weapons caches seized in Baghdad
» Industry: 36 companies to manufacture weapons and equipment to build their production lines in Iraq
» Iraq Seeks $2bn in US Military Equipment
» U.S. poised to sell Iraq $2 billion in military equipment
»  Iraq .. Baghdad operations prevent the carrying of weapons in and near the protest squares