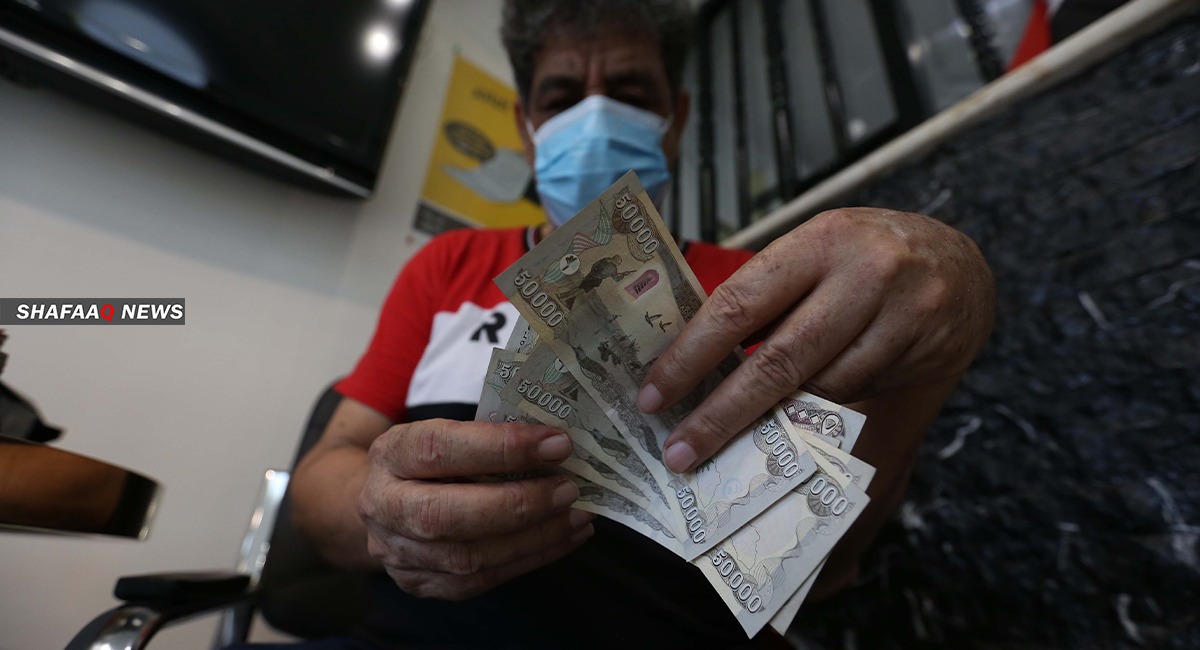 Shafaq News/ The unstable security situation in Iraq and the Ministry of Finance's statements about the difficulty of providing salaries to employees seem to have overshadowed the dollar's exchange rate -which has seen a surge in its price in the past two days against the Iraqi dinar.

On Thursday, Central Al-Kifah Stock Exchange in Baghdad recorded 124,400 Iraqi dinars for 100 U.S. dollars.
Financial professionals and economists attributed the rise to statements made by some officials that the dollar price should be raised in the 2021 budget; while speculators took advantage of these statements and raised the dollar’s exchange rate.
The continuous rise of the dollar’s price
"The dollar will continue to rise under the current unconsidered policies and measures. The dollar is controlled by the central bank -through currency auction under normal conditions", Abdul Rahman Al-Mashhadani, a professor of political economics at the Iraqi University, told Shafaq News agency.

Al-Mashhadani continued, "The panic and horror of the situation and the Finance Minister’s statements about the employees' salaries -as well as other officials' statements about the need to change the exchange rate in the next budget law, has greatly affected the exchange rate through the tendency of the citizen to buy the dollar -especially since 77% of the money is hoarded among the general public in their homes; therefore people will resort to the dollar in light of the economic and security crises -which is the safe option above all other currencies”.
Exploiting chaos
"Speculation is continuing, and all conditions are favorable for making different deals. Iraq’s Central Bank did not pump money through the auction on Saturday and Friday; so speculators took advantage of the lack of supply and exploited the media chaos in general -either by the government or by some politicians, who demanded that the Iraqi dinar be devalued to solve the value of salaries”, financial expert and Central Bank board member, Majid Al-Souri said to Shafaq News agency.

Al-Souri confirmed, “The devaluation of the dinar can be carried out, but more bitterly than the biggest reduction or any other measure. If the dinar depreciates by 25%, the purchasing power of all salaries will be reduced by more than 40%; it is a multiplier factor that plays its role in the subject. What is being put forward now is dangerous for the Iraqi people.. Monetary inflation will lead to further impoverishment not only of the staff class but of all segments of the Iraqi society”.
"The right thing to do is to reduce the operating expenses, in particular, to reduce the Iraqi state’s officials’ salaries and allowances. The current propaganda and pressure are to put pressure on the central bank to devalue the Iraqi dinar", clarified Majid Al-Souri,
Corruption Alliance
"The reasons for the dollar's rise against the dinar are that the latter is influenced by the statements, so the bank governor's announcement of a decline in the monetary reserves would force the bank to reduce its sales -so that it does not cover all remittances, as a result, there will be a lower offer and a large demand for the dollar. The second reason is that there is no direct window from the central bank to sell the dollar to the citizen and the trader, that makes banks form a corrupt alliance to create a black market for the dollar”, said Dhurgham Mohammed Ali, head of the Economic Information Center to Shafaq News agency.
Dhurgham proposed a solution to stabilize the dollar, “opening direct sales to small traders and small remittances at the official rate without bank mediation".

The white paper is the reason
"One of the proposals made by the government in the white paper is to reconsider the dollar’s exchange rate. The budget has a cumulative deficit and the state wants to finance the budget with deficits -inflationary financing. The proposal in the white paper is not bearable on both sides but bears one aspect..Which is the appreciation of the dollar against the dinar", said MP Ahmed Hama Rashid, member of the parliamentary finance committee.
https://shafaq.com/en/Report/Speculation-and-ill-considered-actions-A-Black-fate-awaits-the-Iraqi-dinar

Similar topics
» Iraqi Dinar Speculation
» Speculation Over Iran's Role in Iraqi Dinar Devaluation
» Efforts to search for solutions and actions supportive of the strength of the Iraqi dinar
» tman23 think that We will know the fate of this speculation for certain January 21st.
» Soon .. Iraqi officials and "high-ranking" Iraqi figures within the US "black list"