Iraq Discusses Gas Investment At Its Largest Oilfield With BP

Iraq Discusses Gas Investment At Its Largest Oilfield With BP 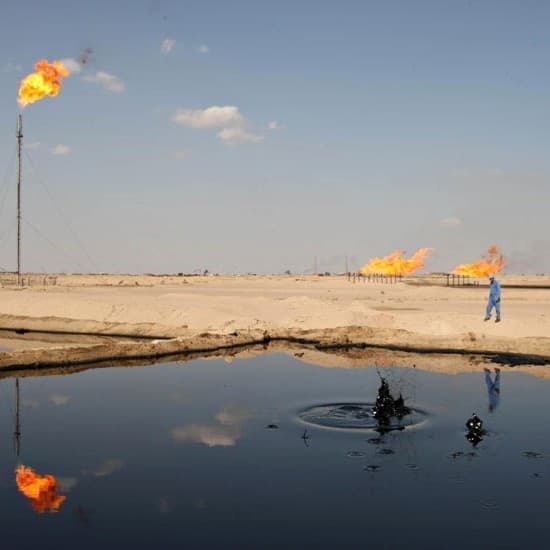 Iraq discussed on Tuesday plans for investment in associated gas production at its largest oilfield, Rumaila, Iraq's Oil Minister Ihsan Abdul-Jabbar Ismail said in a statement to Shafaq News agency.
With BP as operator, the Rumaila oilfield produces 1.5 million barrels per day (bpd) of oil, or around a third of the crude oil pumped in OPEC's second-largest producer after Saudi Arabia. Oil production at Rumaila has increased by 40 percent since 2010.

"The maintenance of production in Al-Rumaila oil field and the available investment opportunities in oil and gas were discussed in a video conference held with the regional manager of BP in the Middle East, Stephen Willis, and the company's director in Iraq, Zaid Al-Yasiri," the Iraqi oil minister said today.

Iraq needs to speed up development plans to invest in processing associated gas and address carbon emissions, Shafaq News agency quoted the minister as saying.
Iraq needs the associated gas from its large oilfields not only to reduce flaring and emissions, but also to reduce its dependence on gas imports, much of which come from Iran.

According to an International Energy Agency (IEA) report from 2019, there is significant potential for natural gas in Iraq as associated gas production has risen together with oil production in the past decade.
"As oil production has soared, so has the amount of associated gas produced alongside. However the capacity to capture and process this gas has not kept pace. The inability to utilise its gas riches means that the country's gas deficit has grown, and Iraq now relies on imports from Iran to meet increasing demand," the IEA said in April 2019.

BP's presence in Iraq began in Kirkuk in the 1920s when the company that is now known as BP helped Iraq to locate, produce, and export oil from Baba Gurgur, which was the largest oil field in the world at the time.
Rumaila, the third-largest producing field in the world, is estimated to have around 17 billion barrels of recoverable oil remaining, according to BP.

By Tsvetana Paraskova for Oilprice.com