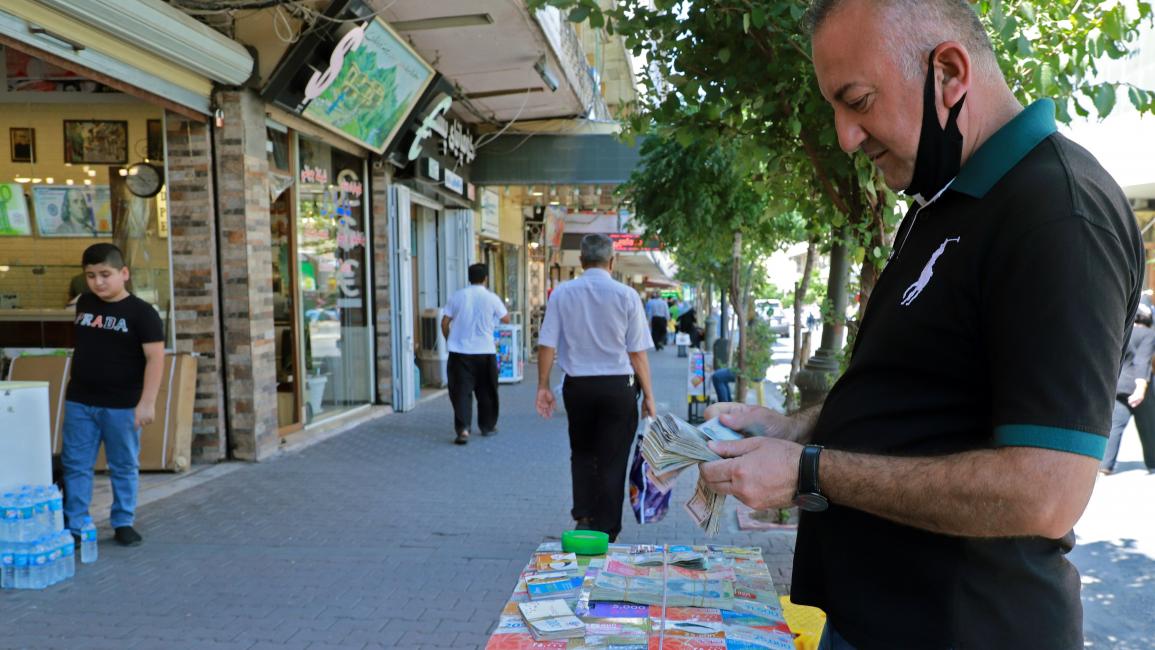 The price of the local currency drops to 1,250 dinars to the dollar (Chuan Muhammad / AFP)
The currency market witnessed a remarkable rise in the exchange rates of the dollar against the Iraqi dinar , which caused great anxiety in the street, which the Iraqis translated into buying dollars and replacing their local currency.

The decline of the Iraqi currency came against the background of media reports that spoke of an American intention to close its embassy in Baghdad, and to direct air strikes on the headquarters of armed factions inside Iraq, in response to the repeated targeting of Katyusha rockets to the Green Zone, where the US embassy is located, as well as the convoys of the International Coalition.

Since the beginning of this week, the dollar has continued to record a rise against the dollar, from 1200 dinars to one dollar, to 1,250 dinars, amid fears that it will rise significantly if the embassy is actually closed.

An official at the Central Bank of Iraq told Al-Araby Al-Jadeed that "the bank has formed new monitoring committees on the work of large banking companies, which manipulate the exchange rate of the dollar against the Iraqi dinar, and it will place some companies on the sanctions list, and prevent them from being given dollars in the Iraqi currency auction." ".

And he indicated that "there are some traders who live on some rumors and issues that happen in Iraq, in order to manipulate the exchange rate of the dollar, and that is why they took advantage of the issue of closing the US embassy in Baghdad, in order to raise the dollar exchange rate."
The Iraqi official, who refused to be named, added that "the Central Bank has formed another team, in cooperation with the Economic Crime Directorate, to follow up the work of exchange offices, as well as the implementation of arrest warrants against manipulators of the price of hard currencies, especially since the currency auction continues in its work, and there is no change." In his dealings, after the news of the embassy’s closure, this price should not be manipulated.

In addition, a member of the Economy and Investment Committee in the Iraqi Parliament, Salem Al-Tufayli, said in a telephone conversation with Al-Arabi Al-Jadeed, that "the high exchange rate of the dollar is linked to the political and security developments in the country, and the recent rise came due to talk about the closure of the US embassy, ​​and the government's assertion that The closure will cause the isolation of Iraq. "

Al-Tufayli stated that "if the US embassy is truly closed, the dollar will witness a very high rise against the Iraqi dinar, and it will have many consequences, not only at the political and security level, but the economic impact may be the greatest."

The Iraqi MP stressed "the need to monitor banking companies, and the work of traders in the markets, to prevent any manipulation of hard currency, which may enter the country into a financial crisis, in light of the major repercussions it suffers due to the decline in oil revenues and the Corona pandemic, especially with the non-payment of salaries of employees Up to now, this matter also helps to raise the exchange rate of the dollar, and this matter is the responsibility of the Iraqi government. "

On the other hand, the Iraqi economic expert, Majid Al-Suri, said in a press statement, that "the price of the dollar is very sensitive and affected by several matters, including political, social, financial and security, and that the drop in oil prices, the presence of Corona and the financial crisis of the Iraqi government are certainly being exploited by speculators from Order to raise prices. "
And the picture said that "what is being raised about the closure of the US embassy, ​​which has not been implemented, has also been exploited to raise the price of the dollar, but at the same time, the Central Bank has its tools and procedures to ensure that the dollar has not risen dramatically."

The Iraqi economic expert revealed that "the rise that occurred recently will not be large and did not exceed 3%, and therefore it remains within the internationally permitted limits."

Since last February, Iraq has been plagued by a stifling financial crisis following the decline in global oil prices, and a sharp drop in Iraq's financial revenues by about 60 percent, which contributed to lowering the price of the local currency.

And Iraq needs about 4 billion dollars a month to pay the salaries of more than 10 million Iraqis distributed in several segments, including employees and soldiers, about 6 million, and the rest are retirees who fall under the social welfare network.

However, according to the reports of the Ministry of Oil, Iraq's financial revenues for several months ranged between 1.3 and 1.6 billion dollars, a percentage of which is deducted for foreign oil companies investing in the country.
The government and parliament are attracted to the responsibility of delaying the payment of salaries for about 50 days, as the government confirms that the delay in the parliament in voting on the internal borrowing law and the 2020 budget to secure financial liquidity to pay salaries is a reason behind the delay of the Ministry of Finance in distributing salaries, while the Finance Committee in Parliament attacked the government She emphasized that the responsibility for managing the financial crisis rests with her and she had to plan in advance, warning of what she described as bankruptcy of the government within six months.

Similar topics
» Barzani stressed that it is alone "Twilight News": private planes prevented from landing in Erbil
» Thabet Al-Abbasi: The closure of the US embassy has negative consequences on all levels
» HOSHYAR ZEBARI: THE CLOSURE OF THE US EMBASSY COULD LEAD TO ISOLATING IRAQ FROM THE WORLD
» Sadr is concerned about the increase in interventions in Iraq and offers proposals including the closure of the US embassy
» News about his imprisonment for 21 years .. Sudanese returns to the Treasury State 6 billion Iraqi dinars !!?