People will kill for hundreds of dollars. What would they not do for BILLIONS of dollars?

It is not clear whether incident is criminal or not BAGHDAD
Director of a Korean company implementing a strategic project in Iraq has committed suicide, the Iraqi Human Rights Commission said on Friday.


Mahdi Al-Tamimi, director of the Office of the High Commission for Human Rights, said in a statement that Park Chul-ho, head of the Daewoo E&C office, which is implementing the Al-Faw port project, committed suicide in the Basra Governorate, southern Iraq.


"The Korean official hanged himself with a wire, and the incident was discovered by a service worker in the company," Al-Tamimi said. Basra Police First Lt. Nafi Al-Jabri told Anadolu Agency that "the police forces found Park on Friday hanging inside his residence." Al-Jabri said that the police in Basra Governorate are conducting an extensive investigation into the incident to determine its circumstances.


It was not clear whether the incident had criminal aspect or not, but it came three days after the Iraqi authorities signed a contract with the Korean side to start implementing Al-Faw port project.
The previous Iraqi government estimated the total cost to complete the construction project for the Al-Faw port at about €4.4 billion ($5.2 billion).


The Iraqis consider the port of Al-Faw as one of the most prominent projects that will bring economic benefit to the country if completed.

"The Iraqi security services arrived at the scene of the accident, and began to collect any further criminal evidence," Mr Al-Sharifi said.

This is the second death of a South Korean executive in Iraq over the past year. In 2019, the director of the company STX, which was making power stations and turbines, also committed suicide in Iraq.

Maj Gen Saad Maan, the director of the relations and information department in the Interior Ministry, said: "The Minister of Interior Othman Al-Ghanmi ordered the formation of a high-level investigation committee and sent it immediately to Basra Province to investigate the suicide of the director of the Korean Daewoo Company in the port of Faw in Basra."

The port in the south of Iraq has seen countless delays, due to financial problems. It has been over a decade since the Iraqi government first proposed the idea of the project.
The previous Iraqi government estimated the total cost to complete the construction project for the port at about $5.2 billion.

Re: Head of Korean firm in Iraq commits suicide 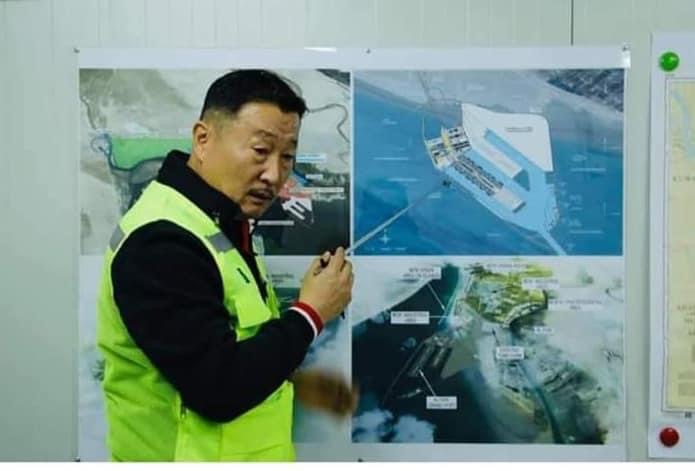 Shafaq News / The South Korean embassy in Baghdad issued a statement regarding the suicide of the director of Daewoo company in Basra Governorate. The embassy said in a statement received by Shafaq News agency, "We have been informed that the Ministry of Interior in the Republic of Iraq has formed a committee to investigate this painful incident, and this committee has begun its work in cooperation with the Basra Police Authority. We are waiting for the results to appear after the completion of the investigations".
The embassy called on all media platforms to avoid spreading rumors and fake news, and requested not to circulate and publish pictures of the victim's body".

The ministry stressed that it will continue to provide its support to the company to finish Al-Faw project".
On Friday, the security authorities in Basra found the body of the director of the Korean company a few days after signing a huge contract in Al-Faw port.
The local authorities say that the suicide hypothesis is more likely, as he was found hanged by wire.

Re: Head of Korean firm in Iraq commits suicide

The death of a top executive of Daewoo Engineering and Construction (Daewoo E&C) in the Southern Iraqi Port of Basra will not affect the Al Faw Grand Port project, according to the Arab country's Transport Ministry.

In September 2019, Business Korea had reported that the South Korean contractor was awarded a $70.35 million order to build a road in Al Faw, its third project, following the first phase of the Al Faw Port Container Terminal project and additional work for a breakwater.

Newspapers said on Thursday had reported death-by-suicide of the head of the Daewoo E&C office in Basra, Park Chul-ho.

"We are going ahead with Faw Port project .....the company has informed us that it has the expertise and personnel to pursue the project," the Ministry said in a statement carried by the local press.
The incident came two days after the Ministry said it had prepared the [size=16]final version of the Faw contract and would sign it with Daewoo in the next few days.
Interior Ministry officials said they had started an investigation in the incident.[/size]

At the same time, the deputy speaker of Iraq's parliament described it as "serious," noting that it "underscores the need to guarantee the security of all investors in Iraq and to push ahead with this strategic project."

Iraqi Prime Minister "Mustafa Al-Kazemi" revealed new details about the suicide of the director of the South Korean Daewoo company, about a month and a half ago, pointing out that the employee was subjected to severe pressure and blackmail.

Al-Kazemi did not mention in his statements to the party or figures that exercised extortion against the director of the company, but he confirmed the continuation of the implementation of the large Faw port project in the Basra Governorate, south of the country.

It is noteworthy that informed sources had revealed earlier, that some influential parties within the government and parliament of Iraq have conditions for obtaining 20 percent of the capital of projects invested in Iraq, in exchange for investors obtaining the required approvals and not obstructing them and granting them possible exemptions.

Al-Kazemi also confirmed that no one is spared from the pressures in Iraq, pointing out that he personally is subjected to great pressures from parties he did not name. He said that they aim to force him to release those he described as corruption whales, after the arrests campaign launched by The Iraqi government against current officials.

The director of the "Daewoo" company in Iraq had committed suicide on October 9, days after the initials of the start of work on the Faw port project.