Judy Note: No one knew the exact timing for Tier 4b to begin exchanges/ redemption, though it could happen any time from now to Fri. 9 Oct, while Bruce said by 1 pm EDT Thurs. 8 Oct. 1.

The RV was released across the globe Sat. night 3 Oct. to Sun. morning 4 Oct.

By Mon. 5 Oct. at 10 pm EDT there was a global release for all RV teams to move the Shotgun Release process forward for all Tiers.

Iraq published in the government Gazette that their in-country Dinar rate was $16.00+.

On Mon. 5 Oct. President Trump ordered a Declass of documents on three completed investigations on O_bamagate/S_pygate, plus there were now 203,495 sealed indictments filed in federal courts across the nation (9,709 filed in Sept. 2020 alone), with each sealed indictment possibly naming up to 39 people.

The first unsealed indictments would be on Hill_ary Clin_ton, with Clin_ton campaign operative arrests and prosecutions in full swing by the end of October.

We have been promised that over the next two weeks many De_ep State criminal indictments would be revealed – in the exact same time period of Tier 4B exchanges/redemption.

On Mon. 5 Oct. the White House Press office staff went into a ten-day quarantine, leaving the possibility of President Trump communicating with the public through the Emergency Broadcast System (EBS), along with uploading videos on a new channel: https://brandnewtube.com/.

Tier 4b could redeem Zim Bonds and exchange foreign currencies at the Contract rates until Wed. 14 Oct. The general public Tier 5 exchanges at regular banks would go until right before the Presidential Election, from Thurs. 15 Oct. through Sun. 1 Nov. 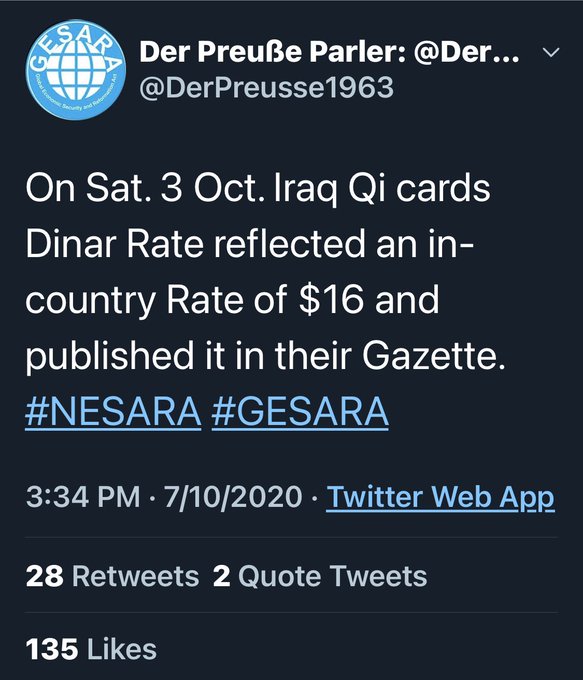 [rtl]Today's exchange rate of 4 US dollars in the markets of Kurdistan is equal to 1.5 Iraqi dinars[/rtl]

All of this exchange rate talk is meaningless.  The only thing that matters is what you see on the CBI website.  All of these gurus are either lying or confusing people with accounting/exchange rate sleight of hand, which they've been doing for ten years.
*****************
Busting Gurus Since 2011

The Ministry of Justice has postings to the Gazette.

Page 1 of 1
Permissions in this forum:
You cannot reply to topics in this forum
Who is online?
In total there are 104 users online :: 0 Registered, 0 Hidden and 104 Guests :: 2 Bots

» NICK FLEMING UPDATE FOR TODAY, 23 OCT --the military of each nation were put on high alert for the “heart” of the reset over the next 48-72 hours

» Make Up A LIE MarkZ says the gurus are being asked to be quiet about the RV intel.... Here we go again....

» THE BIG CALL HIGHLIGHTS, -- Bruce is saying -- we are in the midst of it happening now 23 OCT

» Petra says - we're in a great place...we're right there. There is no question about it...

» Footforward says When the rate changes it will change on CBI website. I'd watch that.

» MilitiaMan states that Director of the CBI as of recent, said that an exchange rate is expected from 120 - 121 IQD to 100 USD.

» Pimpy claims you're either going to see this revaluation of the Iraq dinar happen either before the election or sometime in January.

» Kaperoni answers -- Why are there so many articles about floating the dinar over the years?

Yesterday at 7:03 pm by GirlBye

Yesterday at 6:53 pm by GirlBye

Yesterday at 6:50 pm by GirlBye

Yesterday at 6:48 pm by GirlBye

Yesterday at 6:39 pm by GirlBye

Yesterday at 2:33 pm by GirlBye

Yesterday at 2:30 pm by GirlBye

Yesterday at 2:27 pm by GirlBye