In Iraq: If You Are Not a Member of an 'Islamic' Party You Won't Get a Job!

In Iraq: If You Are Not a Member of an 'Islamic' Party You Won't Get a Job! 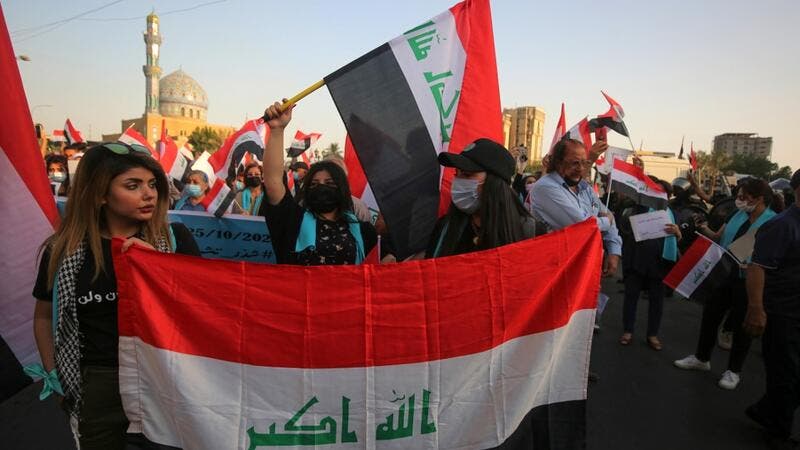 Thousands of Iraqis gathered today in the capital Baghdad and in the country's south on the first anniversary of the start of unprecedented protests demanding the fall of the ruling class. AHMAD AL-RUBAYE / AFP

Highlights
Over the years, a solid network of religious parties and clerics has formed, controlling a large part of the employment process in government departments.


With so many sit-ins by Iraqi university graduates persisting in front of ministries and government institutions, demanding jobs, it was fair to investigate how Islamist parties have penetrated the circuit of government hiring and turned it into a system to attract followers and strengthen their grip on state structures.

One such case is the story of a female job applicant with a doctorate degree in nuclear physics. When she applied for a job at a government department, she was asked to submit a recommendation from an Islamic party.  The candidate said that she had worked hard to complete all the requirements up to the PhD level in the very promising field of nuclear physics, but when she went looking for a job, no one cared about her specialisation but cared more about her political loyalty and affiliation. Finding a job in Iraq is a rare occurrence, let alone getting it. Practically, employment opportunities exist almost exclusively in the public sector, because the private sector has long been clinically dead, due to Iraq’s single-revenue economy, explicit mismanagement, and the wonderful work of the barons of corruption.

The Iraqi government no longer keeps any statistics on the number of its employees, because the recruitment process is subject to the political quota system, according to which jobs, from the rank of minister all the way down to the rank of street cleaner, are distributed among the parties that represent the sectarian and national components.  The powerful parties may decide one day to arbitrarily increase their shares of the job appointments or seize the shares of other parties, in a vivid embodiment of the logic of the law of the jungle. Take, for example, the Islamic Dawa party. Between 2006 and 2014, when Nuri al-Maliki was prime minster, the power hungry Islamic Dawa Party used appointments to government jobs as a means to win hundreds of thousands of votes during the multiple polls that took place in that era.

The Dawa planted its claws in all state institutions during that period, and its leader, Nouri al-Maliki, adopted a dictatorial, exclusionary, sectarian approach in dealing with political partners. Maliki continued to reap the benefits of that era even after he was prevented from running for a third term as prime minister in 2014. But this set back was no skin off Dawa’s nose, because Maliki’s successor, Haider al-Abadi, was a Dawa man, and that allowed the party to further consolidate the gains from its presence within state institutions.

In order for religious parties to secure the loyalty of those they appoint in government jobs, they require from the candidates for those jobs a recommendation from people the parties trust. For that task, religious parties rely on clerics who usually go on periodic preaching tours and, therefore, became known on a large social scale. In exchange for his recommendation, the cleric is usually generously rewarded financially by the parties. Over the years, a solid network of religious parties and clerics has formed, controlling a large part of the employment process in government departments, especially in the central and southern regions.
During elections or when organising targeted demonstrations, religious parties use ordinary employees, who are placed in state institutions. As for employees who are very close to the parties, they usually carry out intelligence gathering missions for the benefit of the political parties they are loyal to, or work to make sure that lucrative government contracts worth millions of dollars go to companies and businesses affiliated with the parties.

Thus, the state has been turned into a mere tool in the hands of religious parties, which they use to consolidate their influence and help them gain more supporters, even if they do not believe in the model of political Islam.
The unfortunate fact is that these corrupt religious parties can always find potential supporters from among the throngs of recent college graduates in undergraduate and graduate studies looking for employment. Religious parties exploit these people’s desperate need for a job to impose indirect political control on them, ensuring that they can be used at any time the parties wish.
A glimmer of hope for a change in the system appeared on the horizon when the unprecedented popular protests toppled the government of Adel Abdul Mahdi and brought in Mustafa al-Kadhimi.

Job seekers became optimistic given that the new prime minister did not belong to the party system that was in control of the “government job market” and the mafia-like network that operates it according to a specific, well-tested and well-established pattern. But Kadhimi was not able to do much on this front, especially when he found out that Abdul Mahdi made sure, six months before he had left the premiership, to burn about $ 20 billion in grants and temporary work contracts under the pretext of meeting the demands of the demonstrators.

So, during the past three months, sit-ins by university graduates have reappeared in front of government buildings.
Observers say that Kadhimi’s opponents may use these gatherings to pressure the government, especially at this sensitive time witnessing a sharp escalation in the race between the United States and Iran for control over Iraqi soil.
They pointed out that pushing the protesting graduates to storm government buildings may be an ideal recipe for Iran to turn the tables on Kadhimi and his government, accused by Iran and its Iraqi proxies of siding with the Americans.

This article has been adapted from its original source.