{Baghdad: Al Furat News} The Ministry of Commerce held its second meeting with the Ministry of Communications to discuss the implementation of the joint cooperation agreement for the electronic transformation project (digital economy), to link all departments and companies of the ministry to a unified data center at the ministry’s headquarters.

This was confirmed by Mohamed Hanoun Karim, Director General of the Commercial and Financial Supervision Department at the Ministry, where he indicated that "during the meeting, the most important basic axes of the electronic transformation project were discussed, as well as the stages of project completion, as this requires establishing the infrastructure that suits the conditions of digital work in all institutions of the ministry."


Noting that "through this project, the headquarters of the Ministry's formations will be linked between them, as well as linking each formation with its sites spread in Baghdad and the governorates, which will facilitate the completion of the work in a transparent manner and will also save a lot of time and effort for the employee and references to the departments and companies of the ministry at the same time."


Stressing the importance of expediting the completion of the project, as it facilitates the work of most of the ministry's institutions, as well as simplifying procedures in the transaction management system at the companies' registrar department, as well as everything related to the ration card file management system and the operations management system in the department of foreign economic relations, specifically with regard to commercial attaches abroad.


On his part, Yasser Amer, Director of Communication Services at the Ministry of Communications, said, “It was agreed with the Ministry of Trade to start working on the digital transformation system at the ministry’s headquarters, and it was also agreed to define joint committees between the two sides, leading to a draft contract for the project, where a work plan will be developed to develop a working paper And in a final form between the two sides. "

Adding that "this step comes within the ministerial platform voted by the House of Representatives in the Iraqi government and as mentioned in the third item (paragraph 7 and 10) thereof, which stipulated the necessity of digital transformation and automation for state ministries in addition to the support provided by the 22 committee in the General Secretariat for the Presidency Ministers ".


It is worth noting that "there is a joint cooperation agreement signed between the ministers of commerce and communications for cooperation between the two ministries regarding the automation of all the work of the ministry, in addition to the general budget, item 19, which authorized the ministers to establish investment projects to increase revenues."

Secretary-General of the Council of Ministers: The Iraqi government shows wide interest in the government document management project

Secretary-General of the Council of Ministers: The Iraqi government shows wide interest in the government document management project 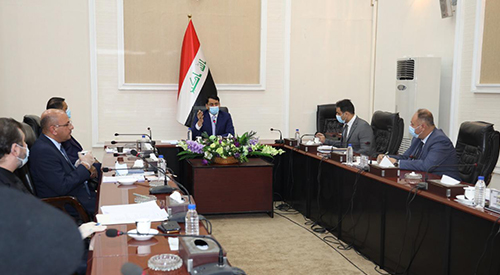 The Secretary-General of the Council of Ministers, Mr. Hamid Naim Al-Ghazi affirmed the Iraqi government's interest in the electronic document management system (electronic governance) project, which was launched by the General Secretariat of the Council of Ministers on the ninth of last September, as the ministries will begin to circulate documents between them electronically through a secure government network. This was during his chairing the agenda of the Committee for Coordination and Management of Governmental Activity towards establishing e-governance .

The attendees discussed the stages of technical cooperation and coordination with the Ministry of Communications in support of the committee's work, the work plan of the customs and border crossings project team, as well as the work plan of the human resources management system and international consulting to develop and train staff, in addition to the work plan of the government expenditures control team, collection and payment, and electronic entry features .

During the meeting, he praised the efforts of the staff of the Ministry of Communications in coordination and cooperation with the staff of the General Secretariat of the Council of Ministers, indicating the Iraqi government's endeavor to benefit from the experiences of countries and international organizations in developing the project during the remaining stages, and according to the timelines prepared .

The second phase of the project includes the completion of the networking process for entities not associated with the Ministry and the governorates and the introduction of the work plan in the project, which will contribute to reducing time in the circulation of official correspondence .

General Secretariat for the Council of Ministers
1 / October / 2020

Similar topics
» Under the supervision and follow-up of Al-Kazemi .. Communications transmits the implementation of the international access portals project for the global company Nokia
» Sudan to submit a request to discuss the implementation of the port project FAO in Parliament
» Minister of Trade and World Food Program discuss electronic project to prevent tampering with card labels
» Iraqi Trade: The one basket project will contribute to supporting the ration card project
» Saudi Arabia affirms Iraq's support in the field of communications, digital technology and space