As he grows more confident, the Iraqi prime minister plays by the rules but also positions himself to take advantage of the compromises he has made 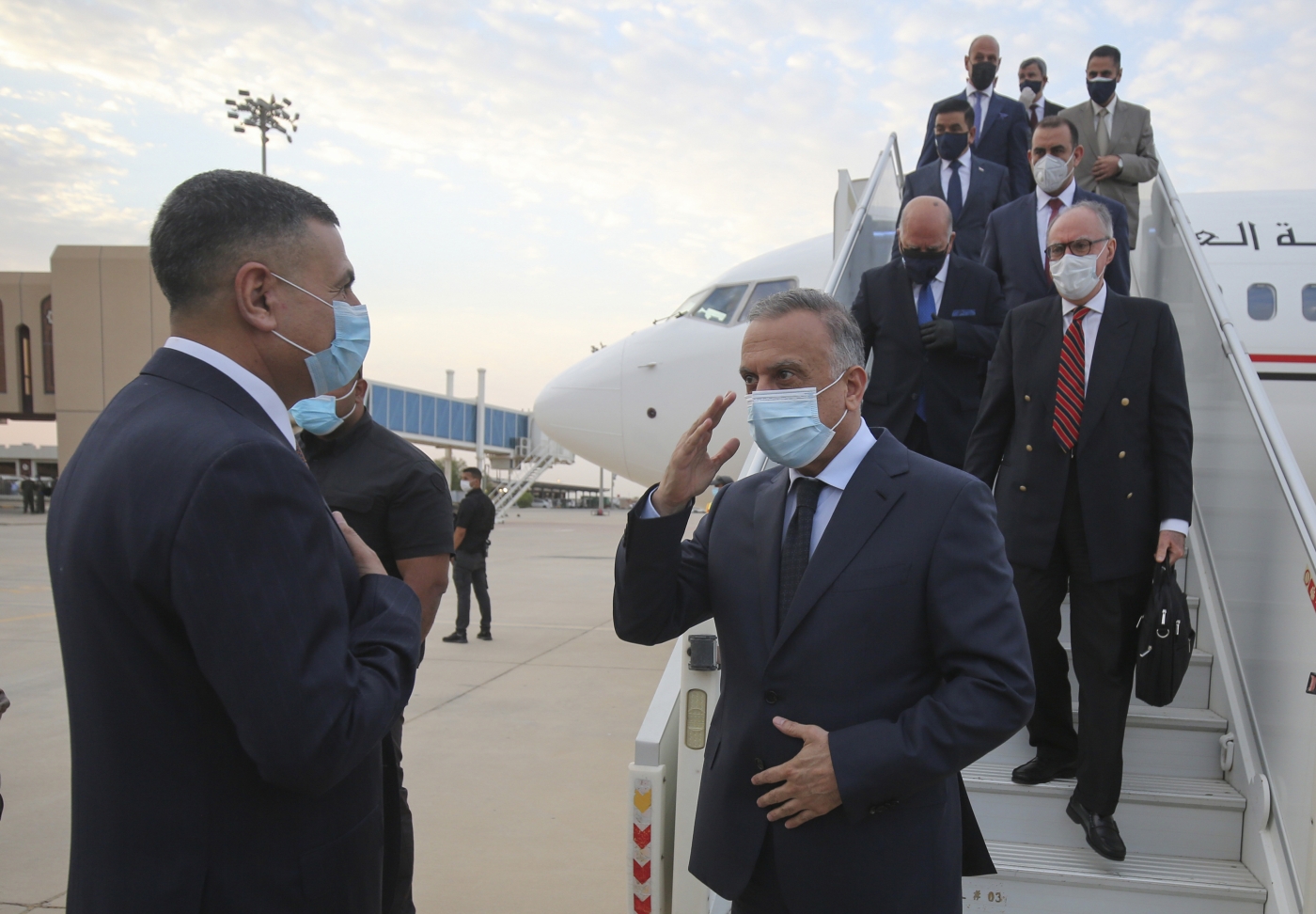 Mustafa al-Kadhimi, centre, is welcomed by Asaad al-Eidani, left, the governor of Basra, in the southern Iraqi city on 15 July 2020 (AFP)

It was 15 September when Ahmed, the office manager of an Iraqi political leader, was surprised by his phone ringing at an unusually early hour. His boss asked him to check the accuracy of the news about the arrest of Ahmed al-Saadi, the director of the National Pension Authority, in central Baghdad, hours earlier.
"He [his boss] was surprised and incredulous. He asked me to find out if the news he received about Saadi's arrest and a number of bank directors was true,” Ahmed, using only his first name, told Middle East Eye.
“The news of the arrests circulated frantically that day and many names were mentioned. He knows that some of the mentioned names are untouchable, but he wanted to be sure.”
Less than 48 hours later, the news of the arrest of Shaker al-Zamili, the head of the Baghdad Investment Commission, and Bahaa Abdul-Hussein, the head of the electronic payment company Qi-Card, a joint venture between the private sector and the state, was confirmed.
Ahmed was surprised by his phone ringing again. His boss was speaking nervously and anxiously this time, asking him to arrange a meeting with a number of his bloc members and allies to discuss the latest developments.

'Most of the corrupt officials, including former and current ministers and general managers, live in great anxiety and fear, and this is what is required'
- Hisham al-Suhail, head of the Iraqi parliamentary bloc

Iraq, Opec’s second largest oil producer and one of the most resources-rich nations in the region, has been ranked high on the list of the most corrupt countries since 2003.
Most of the political forces and armed factions involved in the political process illegally use the financial and human resources of the state to finance their activities. Some officials estimate that Iraq's losses amounted to $450bn over the past 17 years due to financial and administrative corruption.


Although there are many anti-corruption institutions - including the Integrity Commission, the Office of Financial Supervision, the Supreme Council for Combating Corruption, the Parliamentary Integrity Committee and the Supreme Judicial Council - they have all failed to curb the spread of corruption in all government institutions and ministries.
Some of these institutions provided the necessary legal cover to protect corrupt senior government officials
Most of the cases that convict senior officials on charges of corruption are put away in drawers, suspending arrest warrants, as they enjoy some form of political immunity provided by the political leaders and armed factions that benefit from the services provided to them through corruption.


“There is great concern and apprehension about the recent anti-corruption measures,” Hisham al-Suhail, head of the Iraqi parliamentary bloc and a member of the Parliamentary Integrity Committee, told MEE.
“Most of the corrupt officials, including former and current ministers and general managers, live in great anxiety and fear, and this is what is required.
“Politicians cannot access public money without the cooperation of government employees, therefore the person charged with a public service must actually feel that there are rewards and punishment and that there are consequences for the illegal services they have been providing to the politicians."

On 27 August, Iraqi Prime Minister Mustafa al-Kadhimi issued a decree to form a special committee "to investigate cases of corruption and exceptional crimes".
The committee, which is to directly report to the prime minister, consists of three members representing the National Intelligence and Security Service and the Integrity Commission, in addition to 25 investigators from the three institutions.


The committee has the power to request any information it needs from all ministry or governmental institutions and to summon any person, regardless of their job title or rank, if the investigations require it, according to a copy of the ministerial decree seen by MEE. 
Tasked with implementing the decisions issued by the "Abu Ragheef Committee", as Iraqi politicians have started calling it, was the Counter-Terrorism Squad (CTS), the most prominent elite force in Iraq.


"All institutions working to combat corruption have failed in their mission over the past years because the decisions issued by them are either leaked - allowing the corrupt officials to escape, procrastinate and bargain - or suspended for fear of the reactions of the forces associated with the corrupt," a former member of the Supreme Council for Combating Corruption told MEE on condition of anonymity.
"Therefore, we needed a security or military force that was not penetrated and that everyone feared, to implement the orders of the judges working on corruption cases.

"The proposal to use a battalion from the CTS was presented to former Prime Minister Adel Abdul-Mahdi last year, but it was not implemented due to nationwide anti-government demonstrations and the political repercussions that followed." 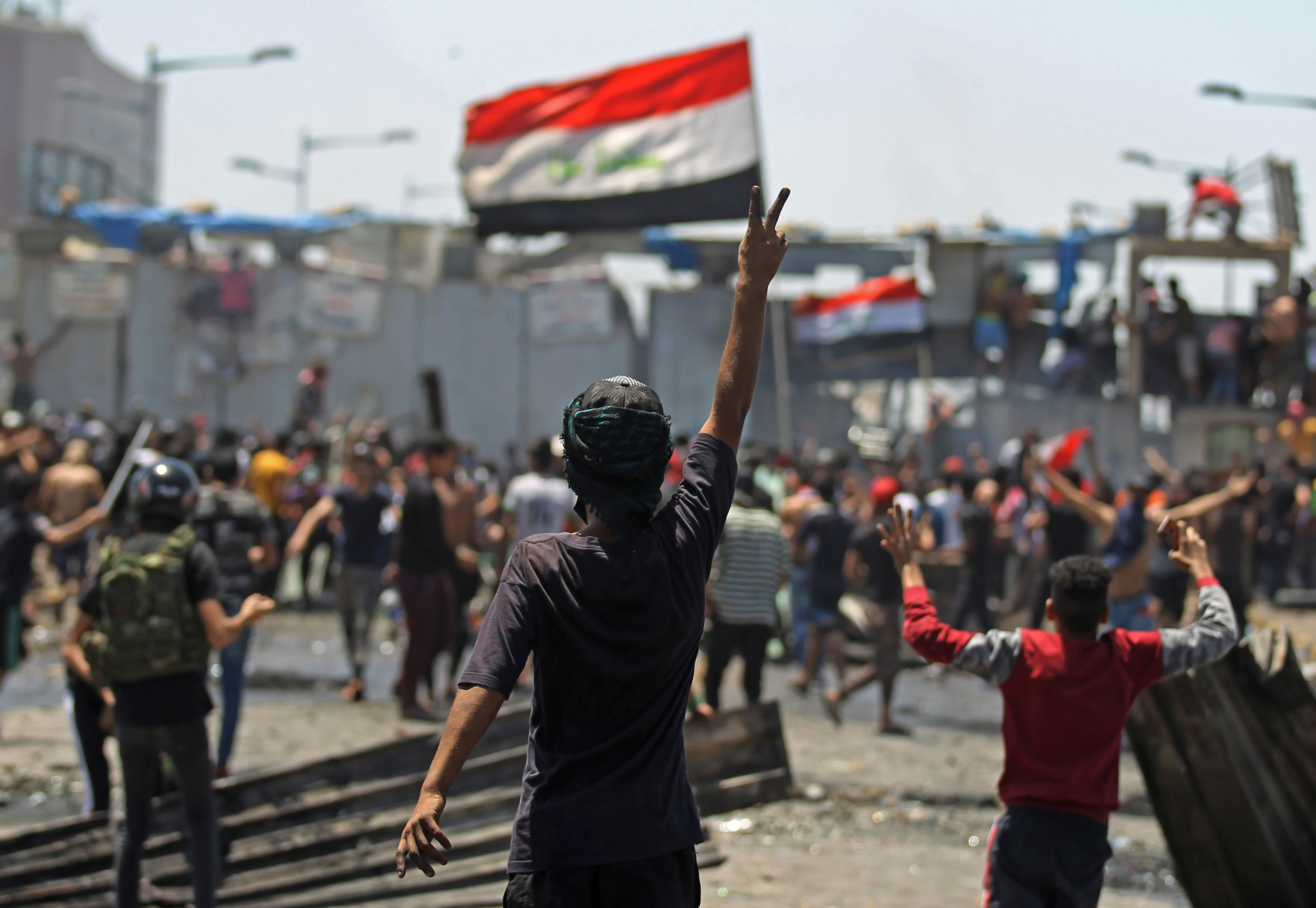 The committee, which adopted near-total secrecy in its work, did not disclose the dossiers it is currently working on, but the targeted names and those close to them revealed part of the ongoing investigations.
The first appears to be targeting officials in the banking sector, including directors of government banks, in Baghdad and the provinces.


So far, Adel Khader, the director of the Iraqi Agricultural Bank, his son, and 10 other employees have been arrested, in addition to the managers of the bank's branches in Fallujah, Ramadi, Abu Ghraib and Salahuddin, banking and security sources told MEE.

Meanwhile, directors of private banks, some of whom have family ties to political leaders and former senior central bank officials, are also being investigated, banking sources said.


Additionally, the committee is investigating cases related to the Baghdad municipality and the Ministry of Electricity. The first case is looking into work by the municipality and financial breaches involving hundreds of millions of dollars, in which former Baghdad mayor Dhikra Alloush and her office director are accused of being implicated.


The second case centres around financial and administrative violations involving former electricity minister Louay al-Khateeb.
Travel bans have been issued against Alloush, Khateeb and dozens of officials associated with the three cases, officials familiar with the investigations told MEE.
The most prominent arrests, which seem to "have caused a lot of concern", are those of Saadi, Zamili and Abdul-Hussein.

'We do not need to target any politician or armed faction at this stage. We are satisfied, at this stage, to trim their nails and dry up their sources of funding'
- Shia political leader

Saadi, whose services were terminated as head of the National Pension Authority at the end of June, is currently under investigation on charges related to seizure of salaries of thousands of deceased retirees who were not removed from monthly payrolls, in addition to the salaries of tens of thousands of fictitious retirees.


Saadi is also being investigated for committing fraud in cooperation with the Qi Card Company "to monthly obtain illegally deducted payments from the salaries of millions of retirees", a senior federal official familiar with the investigations told MEE.
"The cases of Saadi and Abdul-Hussein are linked. Saadi was the one who dragged Abdul-Hussein to the investigation,” the official said.
"Abdel-Hussein is not a government official. He is a businessman, but he participated in major corruption operations with Saadi. Saadi admitted that he was his partner in thefts amounting to hundreds of millions of dollars per month.
"All from retirees' money and from the budget allocated to finance the retirement fund."


Meanwhile, the probe into Zamili, who has held his position since 2016, is related to ongoing investigations of corruption involving state real estate, water and sewage projects, and investment licences for fake projects, members of the Parliamentary Integrity Committee told MEE.


The three men were arrested in Baghdad, and the number of those involved with them in these case has not yet been announced.
"The best thing is for them [the detainees] to confess before they even get to the investigation headquarters," a Shia political leader close to Kadhimi and familiar with the committee's work, told MEE condition of anonymity.


"Each of them would drag five heads or more with him, and this is what we need now to sustain the momentum of the committee's work.

"We do not need to target any politician or armed faction at this stage. We are satisfied, at this stage, to trim their nails and dry up their sources of funding.
"If we manage to continue at this pace, we will achieve a lot in a record time."