4,5 billion dinars, the value of the cash allowance for the ration items

4,5 billion dinars, the value of the cash allowance for the ration items 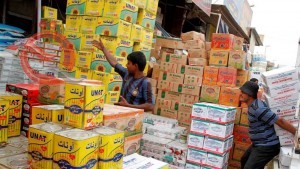 The Ministry of Trade estimated the amount that could be allocated instead of the ration card items for distribution among the covered, after submitting a proposal, at four billion and 500 million dinars per month.

The ministry’s spokesman, Muhammad Hanoun, stated that this monetary allowance is not within the ministry’s jurisdiction and requires a legislative decision from the government, and the ministry is concerned with implementing decisions. On the provision of the ration card items that were absent from the citizen for months, Hanoun explains that flour is distributed monthly, and sugar is distributed at the present time, and rice has been prepared for four meals so far, while the oil material will be contracted during the current week to provide it to agents in order for them to have Distribute it among citizens as soon as possible.

He attributed the delay in preparing the foodstuffs to the delay in approving the budget and the failure to provide the financial allocation for contracting it.