Al-Abadi: The American withdrawal will lead to the closure of dozens of embassies and the isolation of Iraq internationally and economically

Al-Abadi: The American withdrawal will lead to the closure of dozens of embassies and the isolation of Iraq internationally and economically 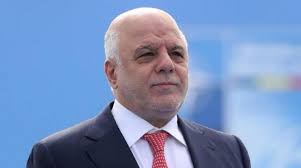 Baghdad / Al-Akhbariya:
Former Prime Minister Haider al-Abadi stressed, on Tuesday, Iraq's need for the presence of the international coalition to fight ISIS, indicating that the closure of the embassy will deliver disastrous messages from Iraq to the world and will enter us with international and economic isolation and will lead to the closure of most countries' embassies.

Al-Abadi said in a televised statement followed by Al-Akhbariya: "The slide in the war means the end of Iraq internationally and economically, and that the country needs intelligence and logistical support from the international coalition to eradicate ISIS cancer, and there is no talk of withdrawal now."

He added, "America told us to close the embassy and not to transfer it to Erbil in case the attacks were not stopped, and that the closure would send catastrophic messages from Iraq towards the world and would enter us into international and economic isolation and would lead to the closure of the embassies of most countries."

"The people do not know how dangerous the continued targeting of missions is to the security of Iraq, its economic situation, and the continued work of investors, companies and international organizations," he said.

He pointed out that "Trump does not wish to expose the embassy to any threat, especially with the close of the American elections, since any step will change the results."

Similar topics
» HOSHYAR ZEBARI: THE CLOSURE OF THE US EMBASSY COULD LEAD TO ISOLATING IRAQ FROM THE WORLD
» American and British embassies warn their citizens of kidnappings in southern Iraq
» The government of Iraq requests to send delegates to establish mechanisms for the withdrawal of American forces
» Parliamentary Finance: Removing the American forces will not lead to any economic deterioration in Iraq
» Abadi: Iraq was trapped internationally, regionally and now strong