Bat sh*t crazy Judy claims -- President Trump and the RV teams set a Shotgun Release time for within the next 72 hours starting at 3 am EDT Tues. 22 Sept.

Bat sh*t crazy Judy claims -- President Trump and the RV teams set a Shotgun Release time for within the next 72 hours starting at 3 am EDT Tues. 22 Sept.

Judy Note: This evening Fleming’s Military Intel Contact said that several sources reported that at a 11 am EDT meeting on Mon. 21 Sept. President Trump and the RV teams set a Shotgun Release time for within the next 72 hours starting at 3 am EDT Tues. 22 Sept. This week Tier 4b was still to be started in order to trigger full access liquidity to all tiers and levels.

According to Q, we were in a window until Thurs. 1 Oct. to witness soft-leak events related to Obamagate that would be coordinated with the RV exchanges / redemptions. Sometime after that Thurs. 1 Oct. “Ten Days of Disclosure” would begin with formal announcements of both the Restored Republic and Global Currency Reset.

On Fri. 18 Sept. countries throughout Europe including Spain and Israel, went into lockdown, closing their Central Banks and the non-retail side of major banks. They told their citizens it was because of Covid-19. In reality it was in preparation for the RV/GCR over the next two weeks during which private Tier 4b redemption/ exchanges would take place.

Mon. 21 Sept. Charlie Ward: In April 2020 the Alliance took down the Illuminati including the Italian Venetian families, arrested the Pope and 32 Cardinals at the Vatican, took the US gold back from the Vatican and put it at the new US Treasury in Reno and Texas, transferred the Federal Reserve to the US Treasury and kicked the Queen out of Buckingham Palace.
*****************
Tweet 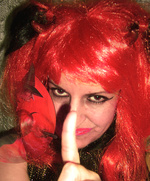 A bunch of crazies for real

Hey there GypZ!! Nice to see you