Khalaf: The financial sector is required to support the energy sector

Khalaf: The financial sector is required to support the energy sector 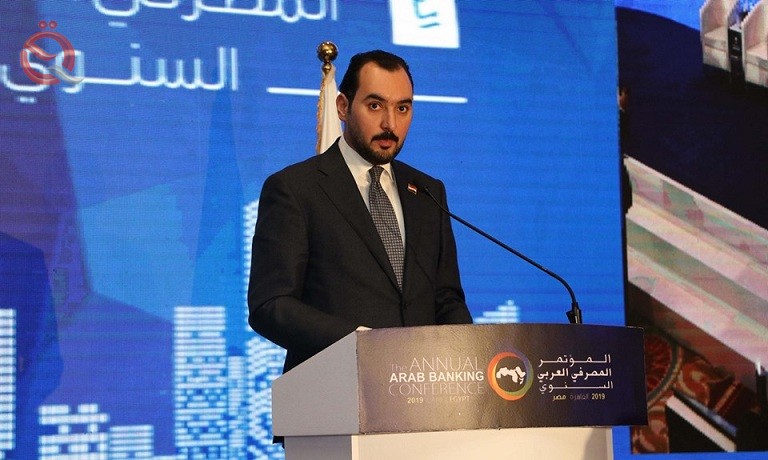 A member of the Board of Directors of the Union of Arab Banks, Ziad Khalaf, stressed in the qualitative hypothetical conference concerning the powering Iraq sector, which was organized by the Frontier Exchange Company, the need to advance the reality of production and distribution of electric power in Iraq, which has a promising economic future in the world and the region, pointing out the need for the banking sector A prominent role in supporting the efforts being made in the energy sector.

Khalaf stated, in a statement received by "Al-Eqtisad News", his vision towards supporting banks and financial institutions for the future of energy in Iraq and ways to invest in them to reach the activation of achieving the partnership between the public and private sectors and to provide the required funding to invest in the energy sector in Iraq and to define the tasks of our prestigious institution in keeping pace with developments and transformations. Digital and the possibility of direct application of electronic collection systems according to the latest advanced systems

Khalaf pointed out that the crisis of the spread of the virus has cast a shadow over the global economy, and many countries that used to have a strong and heavily indebted economy have become, and some Arab countries have faced common challenges due to the frequent power cuts and the governments ’inability to keep pace with the increasing demand for energy resulting from the decline in the current level of investment. In the sector and the political turmoil in this country, in addition to the economic repercussions of the new Corona virus and the closure measures that have been imposed during the past months to contain the virus.

Khalaf thanked "Frontier Exchange for the invitation to shed light on the energy sector in Iraq in light of the Corona pandemic."

Khalaf continued, saying, "We were also proactive in investing heavily in infrastructure and advanced technologies, in line with international trends and practices in the transformation towards digital economy and financial technology, which will provide the key elements for the transition to e-government in various parts of the state, including Energy and electricity sector, as the issue of electronic collection and collection will be strategic for all investors in this sector. "

He added: "This is what we worked on in 2019, as we have acquired an integrated system for collection and collection that provides multiple electronic channels for the Iraqi citizen, in addition to the possibility of linking this system with the database of the concerned government agency, which facilitates the process of completing the collection and thus reducing waste and advancing the reality of the sector." .

He continued, "The weakness of the infrastructure in the issue of collection and collection constitutes one of the biggest challenges for any investor who wishes to invest in this sector. Therefore, what we have done is by investing in the acquisition of the best global collection systems in accordance with international standards and providing the necessary systems and comprehensive infrastructure, which is an element." "Very influential to attract investments similar to what is applied in neighboring countries and the world."

He said: "The energy sector represented by the oil and gas industry and the electricity sector is the main and supportive engine of the Iraqi economy, specifically oil in Iraq, which is the backbone of the Iraqi economy, as Iraqi oil exports represent more than 85% of the total state income annually, and the average oil production reaches 3.5 million. Accordingly, the annual income from Iraqi oil exports is estimated at about 50 billion dollars annually based on the average price of 40 dollars per barrel. Despite this, the experiences of countries have proven that rentier economies that depend on oil only in forming the largest part of the state's imports are not It has the financial ability to face economic challenges and setbacks. "

In turn, the representative of Frontier Exchange, Ahmed Al-Jar, stressed the importance of the conference, which focuses on an important sector in Iraq and is the cornerstone of the sustainable development process that Iraq seeks, as major international companies meet in this conference in order to contribute to the advancement of this important sector.

Powering Iraq is the first major event of its kind focusing on the development and investment opportunities within Iraq’s Power and Electricity sectors. The conference, held in Baghdad, offers unique insight from high-level government officials and leading multinationals on the next step towards restoring and rebuilding Iraq’s power demands.

Powering Iraq, held under the Official Patronage of the Ministry of Electricity and the Government of Iraq, aims to tackle the key challenges facing the electricity sectors in the country. Years of conflict, damage and neglect have left the power and electricity sector in need of significant international investment and technical expertise. Recently the Government of Iraq has started to make significant progress in restoring power generation and licensing new projects within the country.
VISIT EVENT WEBSITE

[size=70]ENERGIZING IRAQ'S FUTURE[/size]
Powering Iraq returns for September 2020! Back as a virtual event, this year we are delighted to be partnering once more with Iraq’s Ministry of Electricity to “energize Iraq’s future”. Iraq is the final unstructured market in the Middle East and North Africa region, offering opportunities in the power and energy sectors that are simply not present in other markets. The Ministry of Electricity will use the conference as a platform to showcase a multitude of new projects in energy transmission and distribution, renewables energy, and of course the highly promising “gas to power” initiatives that are being developed in conjunction with Iraq’s Ministry of Oil.
Powering Iraq’s new digital format will allow delegates to tune in from wherever they are in the world to join high-level content discussions and connect 1-2-1 with a multitude of Iraqi government decision-makers, multinational companies, power producers, investors and service providers. Using the very latest conferencing technologies you can add the most interesting sessions to your personalised event feed, as well as browse all registered participants and book video meetings directly.
We do hope you will join us online in September as we focus on the next steps towards restoring and rebuilding Iraq’s power generation and distribution capacities.”

Similar topics
» The President of the Republic, Barham Salih, during his meeting with the Chairman of the Board of Directors of the Development Bank, Ziad Khalaf, stresses the support of the private banking sector
» European Union and World Bank support Iraq’s Energy Sector Reforms
» The annual Arab Banking Conference organized by the Union of Arab Banks in Cairo: 700 banking leaders from 23 Arab and foreign countries
» Parliamentary deputy for energy: out of Iraq from Chapter VII will support the implementation of energy projects
» The Iraq Oil & Gas Show (IOGS)