The Arab Spring was the start of an ideological conflict between Turkey and the wealthy Arab Gulf nations. Turkish assertiveness is strengthened by an expanding economy and a brand of Islamic ideology which is shared with the likes of the banned Muslim Brotherhood. Israel, on the other hand, stands to benefit from this conflict by strengthening its relations with European and Arab neighbors. The trans-Israel Eilat-Ashkelon pipeline could be a massive asset that would cement existing ties.


Tensions between Turkey and the Gulf nations grew after Ankara expressed its strong support for Morsi and the Muslim Brotherhood in Egypt after Mubarak was overthrown. The monarchies in the Gulf view Islamic democracy as an existential threat to their style of rule. The imprisonment of Morsi, the civil war in Libya, and the discovery of gas deposits in the Eastern Mediterranean have worked in favor of Israel and its strategic value. The recent normalization of relations between Israel, the UAE, and Bahrein could finalize an anti-Turkey coalition that will define politics in the region for decades.


Already an impressive coalition consisting of France, Greece, Cyprus, Egypt, the UAE, and Israel is confronting Turkey’s saber-rattling. Besides security cooperation, these countries are also working on strengthening political and economic ties. On 16 January the East Med Gas Forum was established in Cairo with the members being Egypt, Cyprus, Greece, Israel, Italy, Jordan, and the Palestinian Authority. Also, Israel, Greece, and Cyprus are working on the EastMed pipeline to connect customers in Europe with gas deposits in the Levantine Basin. 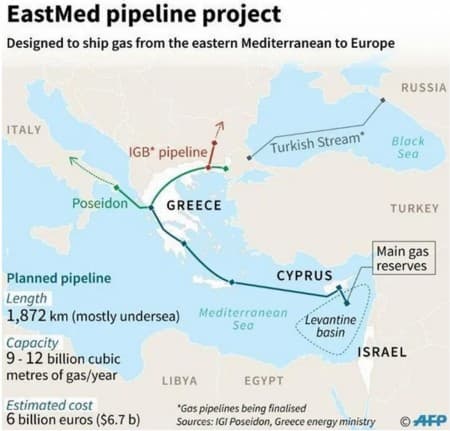 The latest initiative in the ideological battle against Turkey is the rehabilitation of Israel's Eilat-Ashkelon pipeline. The normalization of ties with two Gulf countries will enable the reuse of the pipeline as a conduit of oil that further deprives Turkey of its role as an energy hub.


The infrastructure was completed in 1968 with the support of Israel and the pro-western shah of Iran. However, the Islamic Revolution of 1979 cut of the oil supplies from Iran that traversed the country. The strategic value of Israel as an essential linchpin of Western energy security diminished overnight. 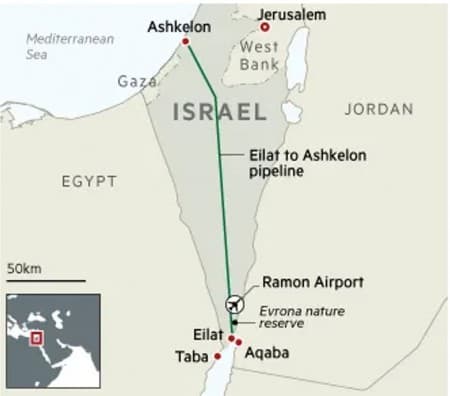 In 2003, however, adjustments to the pipeline enabled reverse flow to allow the oil to run both ways. The former Soviet states Russia, Azerbaijan, and Kazakhstan willingly made use of the pipeline for their oil to travel from the Black Sea area to Asia.


The coalition is pushing for the Eilat-Ashkelon pipeline to play a bigger role which will benefit the energy security of customers and the strategic goals of Israel. The re-purposing of the pipeline to carry oil from the Persian Gulf to Europe would diminish Turkey’s role.


The pipeline's owner, Europe Asia Pipeline Co. (EAPC), expects to capture somewhere between 12 and 17 percent of the oil trade transiting through the Suez. It affects Egypt's ability to generate income as a significant share of the state's coffers comes from transit fees. According to a confidential Israeli government source of Asia Times, "while better relations with the UAE and the other Gulf States are important, our peace with Egypt is absolutely essential for maintaining regional stability.


Without it, the security position of the country will devolve significantly. Therefore, we should coordinate with the Egyptians rather than attempt to harm their position unilaterally."
However, EAPC’s pipeline could be an addition to the Suez Canal. Despite the recent expansion of the Suez, the largest supertankers are still not able to traverse the Egyptian desert. The pipeline could change that when supertankers can pick up cargoes in the Red Sea or the Mediterranean.


Until now EAPC has operated the pipeline in relative secrecy due to two reasons. First, certain Arab customers would like to keep their commercial deals secret due to Israel's reputation in the Islamic world. Second, Iran provided some of the funds to construct the pipeline before the Islamic Revolution in the sixties. Making public the companies’ operations and earnings could strengthen Tehran’s case in international arbitration cases. In 2015 a Swiss court ordered Israel to pay Iran compensation worth $1.1 billion.


Despite the challenges, political backing from the Israeli government, the conducive strategic environment, and already available infrastructure will likely lead to increased use of the pipeline.