Iraq was included in the list of the countries that have significant deficiencies in their fight against money laundering and terrorism financing back in October 2016.


The meeting between the two high-ranking officials took place on Wednesday in the Brussels-based European Commission headquarters.


Both countries discussed cooperation between Baghdad and the EU countries, as well as issues of mutual concern and the parliamentary elections that are scheduled to be held in Iraq in June 2021.


“The two sides discussed the issue of removing Iraq from the European Commission’s list of high-risk countries in the field of money laundering and terrorist financing.

“And also renewed inviting the relevant authorities in the commission to accelerate dialogue with the concerned technical authorities in Iraq in order to complete the evaluation of Iraq’s performance in this field, and remove it from this list,” the ministry said in an official statement.


Mr Fuad, in turn, extended an invitation to Mr Borrel to pay a visit to Iraq “at the earliest possible opportunity” to talk about strengthening bilateral ties, the statement read.
The Iraqi minister has praised the EU efforts to provide political and economic assistance to the country, especially to confront the COVID-19 pandemic.


And it also reiterated Baghdad’s commitment to the principle of respecting the sovereignty of other states and not interfering in their internal affairs.

Foreign Minister Fuad Hussein from Brussels, which is the second leg of his official tour in a number of European countries, said: Iraq is a promising country and owns the future, adding:


This came when the Minister was hosted by the European Press Club in the Belgian capital, Brussels.


Indicating: that Iraq is looking forward to expanding its relations with European countries, and expanding cooperation with them in all fields, calling on European companies to invest, especially in the field of energy, and the oil and gas industries.


In his answer to the questions of a number of journalists, the Minister touched on the developments of the political and security situation in Iraq, noting that: Iraq has faced several challenges, including: terrorism, the decline in international oil prices, and the Corona pandemic.


Indicating: We are trying to deal with Corona virus in cooperation with different countries, pointing out that: The decline in oil prices has led to something similar to the economic crisis.


On the security issue, the Minister warned that the terrorist organization ISIS is still a threat to Iraq, neighboring countries and the world at large, and they are trying to reorganize themselves in Iraq, Syria and some African countries. 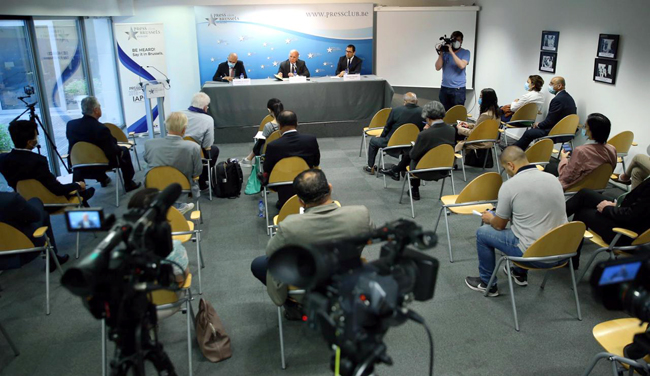 The Minister of Foreign Affairs stresses the importance of activating the Partnership and Cooperation Agreement between Iraq and the European Union; To strengthen bilateral relations

[size=34]The Minister of Foreign Affairs stresses the importance of activating the Partnership and Cooperation Agreement between Iraq and the European Union; To strengthen bilateral relations[/size] 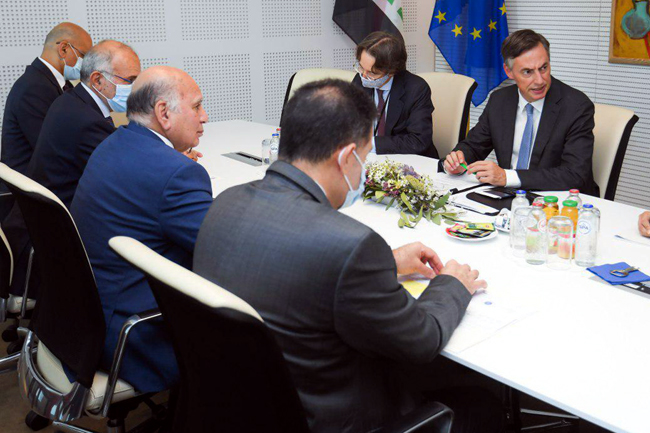 
They discussed security, political, economic, and health developments in Iraq, as well as files of common interest, and the importance of strengthening bilateral relations by activating the Partnership and Cooperation Agreement between Iraq and the European Union.


The Minister presented a review of the developments in the political situation in Iraq and the region, and the Iraqi government's preparations to organize elections in accordance with standards and conditions that restore the Iraqi people's confidence in the feasibility of political participation, praising the positive role that Iraq plays in alleviating the crises and tensions in the Middle East region, affirming at the same time. The Iraqi government is continuing its efforts for dialogue with neighboring countries.


He also discussed the pivotal role that Iraq plays in the field of fighting terrorism.


For his part, Mr. McAllister praised Iraq’s balanced stance on current events in the region, and affirmed the European Union’s political and economic support for Iraq, and its desire to develop relations with Iraq at all levels.


Mr. McAllister praised the efforts of the Iraqi government in the field of combating the terrorist organization ISIS, affirming the European Parliament's support for Iraq in its war against terrorism, and expressed his confidence in the government and its success in its merits, especially the holding of fair and transparent elections that restore Iraqi voters' confidence in the political process.