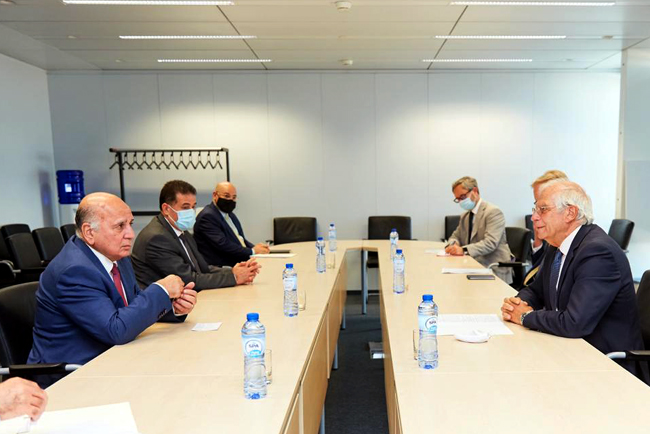 Shafaq News / The Iraqi Minister of foreign affairs renewed on Thursday the call for the European Commission to remove the name of Iraq from the AML high risk countries list.


The ministry said in a statement to Shafaq News Agency, that " Minister Fouad Hussein met with Josep Borrell, the High Representative for Foreign Affairs and Security Policy in the European Union, at the European Commission headquarters in Brussels".


The Iraqi minister commended, "the Union's keenness to provide political and economic support to Iraq, especially during the COVID-19 pandemic".
The two sides also touched on the, "meetings of the Joint Committee for Human Rights and Democracy that were held between the two sides on 9/8/2020", and stressed, "the importance of the Partnership and Cooperation Agreement concluded between Iraq and the European Union countries, as it usually represents the strategic framework for the relationship between the two sides".


Hussein expressed his, "absolute rejection of Iraq turning into a conflict arena between the competing parties", and touched on, "the government's decision to hold early elections next June, and its aspiration to cooperate with international parties interested in this matter".


According to the ministry's statement, "the two sides discussed the issue of removing Iraq from the European Commission’s AML high risk countries list", inviting the commission to open a dialogue with the Iraqi concerned technical authorities, to complete the evaluation of Iraq's performance in this field and remove his name from this list".