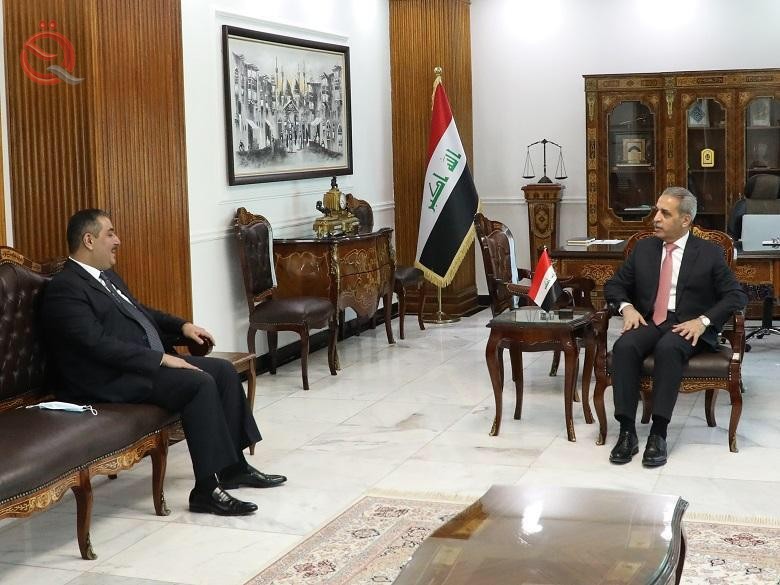 Part of the meeting of the Central Bank Governor, Mustafa Ghaleb (left), with the President of the Supreme Judicial Council, Faik Zidan

On Thursday, the Governor of the Central Bank of Iraq, Mustafa Ghaleb Al-Kitab, met with the President of the Supreme Judicial Council, Judge Fayeq Zidan.

The Central Bank said in a statement received by "Al-Eqtisad News", that "during the meeting, His Excellency the Governor of the Central Bank confirmed that a deliberate banking plan had been developed that would develop the work of the central bank, strengthen the national currency and address negatives in cooperation with the courts specialized in joint work with the central bank."

In turn, the President of the Supreme Judicial Council stressed during the meeting that "the selection of independent personalities from among the employees of state institutions to manage these institutions gives an indication of the government's seriousness in pursuing the professional institutional approach in building the state as well as emphasizing the importance of preserving the independence of the Central Bank in accordance with the constitution and the law of the Central Bank of Iraq," according to Statement.

Zidan stressed "the necessity of adhering to banking laws, the anti-money laundering and terrorist financing law, and the instructions issued pursuant to them, to build a solid banking sector capable of facing financial and economic challenges and providing real opportunities for development."