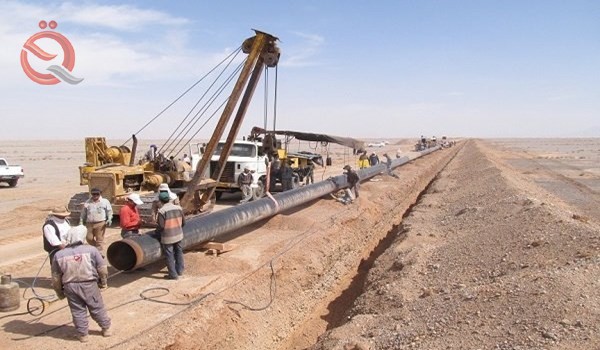 On Thursday, Iraq and Jordan affirmed their efforts to complete the electrical connection and establish a joint industrial zone between the two countries.

A statement by the Ministry of Planning, received by Al-Eqtisad News, stated that “Minister Khaled Battal Al-Najm received today, Thursday, in his office at the Ministry’s office, the Ambassador of the Hashemite Kingdom of Jordan to the Republic of Iraq, Montaser Al-Zoubi, and his accompanying delegation, and the two parties discussed during the meeting the results of the summit. The trilateral, between Iraq, Jordan and Egypt, which was held in Amman recently. "

He added, "The two sides affirmed that the two countries will take practical measures to implement the decisions of the summit, including completing the requirements for electrical connection, establishing a joint industrial zone between Iraq and Jordan, and cooperating in the export of Iraqi oil and gas to both Jordan and Egypt, as well as expanding horizons. Investment and the provision of appropriate conditions, for investment companies to implement strategic projects.

The Minister of Planning pointed out, "the launch of practical measures by the Iraqi side, to activate and implement the decisions of the tripartite summit," referring to "the issuance of a court order to form the Iraqi Coordination Council, as well as the emergence of specialized committees in various fields."

In addition, the two parties discussed joint efforts between Iraq and Jordan to confront the Corona pandemic, and its negative effects on the economic and development reality, in the short and medium term.

For his part, the Jordanian ambassador expressed his high appreciation for the efforts of the Minister of Planning, "in enhancing joint cooperation between Iraq and Jordan," referring to "forming a permanent secretariat to follow up on the implementation of the decisions of the tripartite summit."

He stated, "The work of this secretariat will be periodic, between the three countries," stressing, "Jordan's readiness to provide all possible facilities in order to raise the level of cooperation, complete the requirements for electrical connection and establish an industrial zone, at the Iraqi-Jordanian border, which will be under a joint administration between the two countries." .

On Thursday, Trade Minister Alaa Ahmad al-Jubouri announced the readiness to hold tripartite summit meetings that include Iraq, Egypt and Jordan to enhance joint economic cooperation, referring to the summit’s endeavor to activate the exchange of goods and establish a free zone for trade exchange between the three countries.

Similar topics
»  Agreement on electrical link between Iraq and Jordan reaches its final stages
» Electricity: Our equipment will be 20,000 MW in the summer
» Iraq and Jordan agree on joint linking of the electrical network
» A Jordanian bank is in the process of purchasing Lebanese Audi branches in Jordan and Iraq
» King of Jordan to Ebadi: We are ready to provide assistance to Iraq