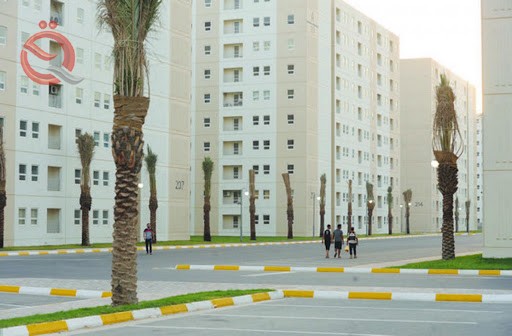 The National Investment Authority announced that work on the Basmajah housing project had been suspended, after the implementing company had completed 30,000 housing units in it.

The director of the administrative department at the authority, Safaa Khalil Hadi, said in a statement reported by the official Al-Sabah newspaper and seen by Al-Eqtisad News, that "Bismayah residential project is one of the largest strategic projects as it is integrated as infrastructure and services from gas systems and electricity supply around the clock, as well as It is considered one of the early days of the one million housing units project, and it faced many problems during the past few months, after the implementing company succeeded, until the end of 2019, in completing 30,000 housing units, of which about 15,000 housing units were distributed among citizens and another 15,000 under delivery.

He added, "The company implementing the project has stopped working now due to non-payment of its dues for the years 2019 and 2020, and it has also delayed due to the war on (ISIS) criminal gangs and the economic situation in the country."

He continued, "The objection to the company is that it is not an investment, but rather government funding," noting that "25 meetings were held between the government and the (Hanawa) company, but no result was reached."

He revealed that the "one million housing units project in Baghdad and the provinces ... has stopped completely," revealing that the Counter-Terrorism Service approached the Authority to provide 18,000 units to its members.

He pointed out that "one of the problems that faced the project was the highway extending from the city towards the capital, especially since the financial allocation was included in the federal budget since 2013 within the amounts allocated to the National Investment Commission in the amount of $ 120 million, but the ministries of planning and finance did not launch their allocations, which was forced The commission is ready to announce it as an investment opportunity after holding a meeting with the Parliamentary Services Committee to refer some ways to invest. "

Hadi stated that "the first road that will be offered for investment is the Basmajah Road with a distance of ten kilometers, which the Roads and Bridges Department has put the final touches to its designs and technical details in exchange for a levy for providing services to the road, and the payment will be by prepayment, especially since a number of companies have made offers to invest this road."

He stressed that "the Basmaya project has made an effective contribution to providing approximately 3000 megawatts to the national network through its investment station, which is currently being expanded to reach four thousand and 500 megawatts, in addition to the construction projects of stations in a number of governorates that have contributed to supplying the system with large energy", stressing "The volume of investment in Basmajah power station alone was estimated at four billion and 500 million dollars."

Regarding the Rasheed Investment Camp complex, the director of the administrative department at the authority said, "The project was referred to the Emirati company (Emaar), and it withdrew due to the existence of violations on the lands, and required the payment of large compensation for the transgressors and those supported by influential parties," revealing "the presence of pressure from politicians and members of Parliament To obtain investment licenses. "

Similar topics
» "They" stopped work at Basmajah complex because it did not receive the dues for the years 2019-2020
» Investment companies stopped their projects in Dhi Qar to delayed financial dues Exchange
» THE ARAB MONETARY FUND LAUNCHES THE APRIL EDITION OF THE ARAB ECONOMIC OUTLOOK, INCLUDING FORECASTS OF MACROECONOMIC PERFORMANCE IN THE ARAB COUNTRIES FOR THE YEARS 2019 AND 2020
» Entrepreneur dues for the second half of 2019
» After 5 years on direct it - Diwaniya is preparing for the opening of an investment complex

Page 1 of 1
Permissions in this forum:
You cannot reply to topics in this forum
Who is online?
In total there are 74 users online :: 2 Registered, 0 Hidden and 72 Guests :: 2 Bots