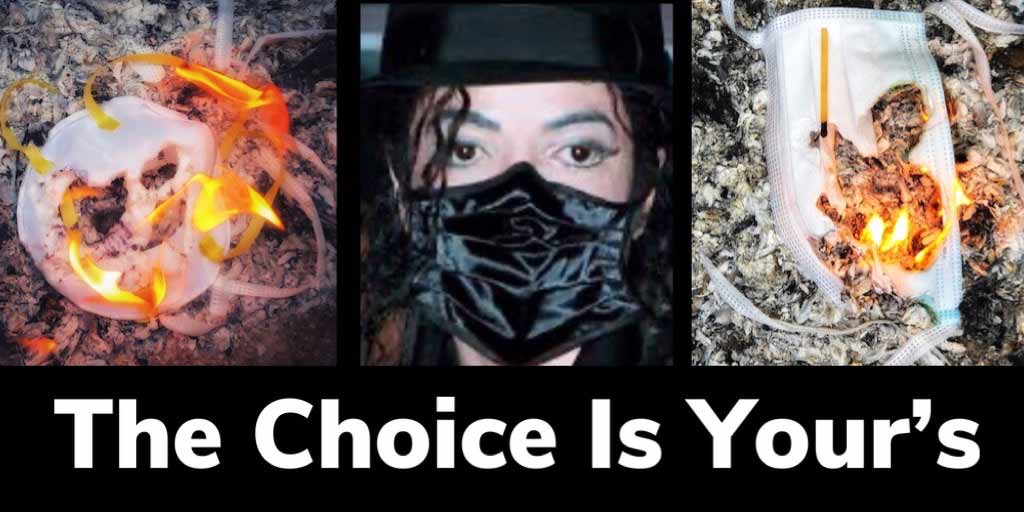 Masks are an obvious mind control device, and I am disturbed so many people are complying on a global scale.

Through the years when I’ve seen images of people in China wearing masks that control the air they breathe “due to pollution”. I knew it was as much of a population control mechanism of depersonalization as are burkas.
Masks depersonalize while making a person feel as though they have no voice. It is a barrier to others.


In MK Ultra Project Monarch mind control, Michael Jackson had to wear a mask to silence his voice so he could not reach out for help.


Remember how he developed that whisper voice when he wasn’t singing? Masks control the mind from the outside in, like the redefining of words is doing. By controlling what we can and cannot say for fear of being labeled racist or beaten, for example, it ultimately controls thought that drives our words and ultimately actions (or lack thereof).
Likewise, a mask muffles our speech so that we are not heard, which controls voice…words…mind.


This is Mind Control.
People who would never choose to comply but are forced to wear a mask in order to keep their job, and ultimately their family fed, are compromised. They often feel shame and are subdued. People have stopped talking with each other while media controls the narrative.

Consider, too, how global education introduced that concept of “we’re all winners” in sports, classrooms, recess, etc. Competition was defused, and it in turn defused a sense of fighting back.

It is as if insurgents can do any violent thing they want because “we’re all in it together” wearing masks. Of course, this works well to mask identities of those breaking the law while further subduing those conditioned to not fight back.

Most importantly, those mandating masks literally are controlling the air that we breathe. That is why my daughter Kelly had to wear masks from the age of 2.


She and I had been MK Ultra conditioned that our abusers held the power of life and death over us. We had been programmed on levels that control heartbeat, eye blinks, and breathing like military special forces endure.
Even Reagan’s “favorite music group” was Air Supply which was used as a deliberate do-or-die trigger for me. Those in the know on MK Ultra recognized the mask as a signifier of robotic programming that they believed prohibited the victim from ever having the ability to think to talk.

The Choice is Yours

I hear daily from healed people who had been traumatized/PTSDed that cannot wear a mask without flashing back on ways their breathing was controlled- from ball gags and penises to water boarding.
Controlling the air we breathe is an ultimate force of power that controls life and death. Seeing media’s constant barrage of assault, murder, or arrest of those who do not comply compounds the control even more.

New World Order perpeTraitors know exactly what they are doing and so do I.  Therefore, I remain confident in not wearing a mask while compassionately understanding why people have such a hard time taking off their masks!
Media-hyped fear mongering suggesting that anyone who does not wear a mask “does not care about others” is as polar opposite as violent insurgents are labeled “peaceful protesters.” People are encouraged when they see my smiling face and find hope that this “new normal” of wearing masks is our choice to comply or not. It really is up to us.


As always, the more you know the more you see and I have cause to see the reality of global mind control being implemented. Mind control has been and is the ultimate New World Order agenda for creating their slave society as per my testimony in TRANCE Formation of America.


Next on the agenda; stronger control over populations through vaccines tainted with microchips.

The good news is that these criminals who lost control of our globe 2016 are arrogant and fail to consider the strength of the human spirit, which is the very reason I survived. We are now witnessing and experiencing a Great Awakening of global proportion as people wake up from years of mind control because, as always, perpeTraitors overplayed and tipped their hand.
And humanity holds the winning card- strength of spirit!
Now, people must gather their strength of spirit, take off their masks while legitimately  peacefully protesting New World Order vaccines, and make their voices heard!


LISTEN TO THE AUDIO AT
https://trance-formation.com/the-great-unmasking/

Page 1 of 1
Permissions in this forum:
You cannot reply to topics in this forum
Who is online?
In total there are 249 users online :: 2 Registered, 1 Hidden and 246 Guests :: 2 Bots

» Foreign Ministry: Iraq and the European Union have trade and energy agreements

» Iraq FM to Asharq Al-Awsat: Our Country Can’t Be Open Arena for Others to Settle Scores

» Iraq could generate over 3.5 GW by capturing 40% of flared gas, GE executive says

» VIDEO:Iraqi Minister of Foreign Affairs warns: 'In some areas, IS activities are increasing"

» VIDEO:A tour of the streets of Erbil, Iraq

» Judy says -- Trump released the RV on Fri. 9/11 and then things got delayed over last weekend as contractual payout mistakes/errors were made. ( OMG WHY DO YOU PEOPLE LISTEN TO HER?)