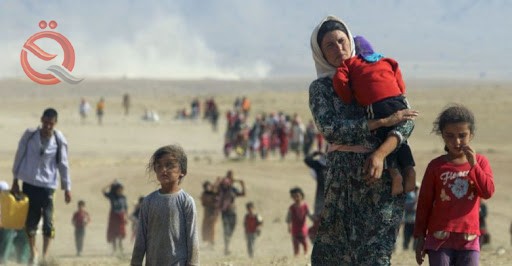 
The Martyrs Foundation announced that it granted 10 million dinars as a compensatory grant for the families of the martyrs of the Yazidi component, indicating that the number of martyrs and the missing among them in Sinjar district exceeded seven thousand.
Tariq Al-Mandalawi, Director General of the Victims of Terrorism and Military Operations Department at the Foundation, said in a statement reported by Al-Sabah that, "With the aim of speeding up the completion of the transactions of the Yazidis in the Sinjar district of the martyrs, missing persons, kidnappers and those affected by their money due to (ISIS) terrorists, a second sub-committee has been opened to compensate them as part of their return efforts. To their regions. "
He added that "the number of martyrs and missing persons in the judiciary exceeded seven thousand victims, and the Foundation will grant them 10 million dinars after completing the transactions from the National Pension Authority."
Al-Mandalawi explained that the formation of "this committee will contribute in short the administrative routine in the implementation of transactions, especially since the victims of Sinjar were not compensated due to their displacement and spread in the displacement camps within the governorates of Arbil and Dohuk, and some of them are outside the country, so the prime minister directed to compensate them."
He added that the Foundation also recently opened a special office for the completion of transactions in Sheikhan district in Nineveh Governorate, which is also designated for Yazidi victims, as it began to receive their transactions and promote them as quickly as possible.

Similar topics
» Dhi Qar: 30 million dinars were disbursed to 300 families of the Hashd martyrs
» The Speaker of the House of Representatives recalls the massacre of Elton Bridge and Tuz Khurmato
» COVID-19 Information
» Six Years After Yazidi Genocide, Investment in Services is Crucial for Returning Yazidi Families
» 1.5 million dinars on its way to families of a certain class