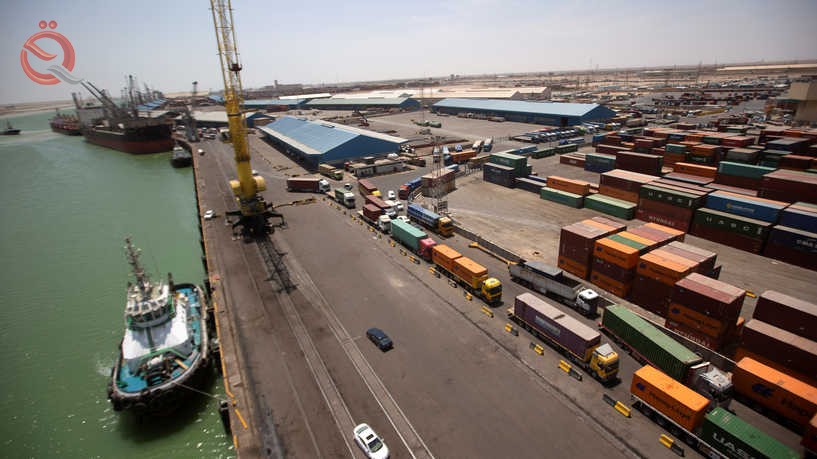 Although 10 years have passed since the Iraqi government announced laying the foundation stone for the large port of Al-Faw in southern Iraq, the project is still far from completion due to many problems, some of which are related to financing and others due to external pressures, according to Monitor.
In the middle of this month, Minister of Transport, Nasser Hussein Bandar, announced that his ministry was planning to sign a contract with the South Korean Hanwha Company to resume the FAO project, and this stage is scheduled to include the construction of five berths, deepening the sailing channel of the port, from 19 to 21 meters, and the establishment of infrastructure For five berths, the stage also includes the construction of a tunnel linking the port of Khor Al-Zubair and a strategic road linking the Iraqi border with Kuwait.
However, this does not mean that the port will be ready in the near future; Because while a lot of the delay has to do with funding, part of the problem also has to do with border disputes between Iraq and its neighbors, according to the site.
The site stressed that Iraq is trying to reach agreements with Iran, Kuwait and Saudi Arabia to resolve these differences, and this is an important step to complete the project, which gives Iraq the ability to host giant naval ships, but Iraq's neighbors may see that completing the port does not serve their interest.

The site also reported that Iran is pushing Iraq to proceed with linking the Iranian national railways to Iraq, in addition to the Syrian railways, which will eventually connect Iran to the Mediterranean Sea in the Syrian port of Latakia, and observers say that this may make Iraq more dependent on Iranian ports in Northern Gulf.
On his recent visit to Tehran, Iranian President Hassan Rouhani urged Iraqi Prime Minister Mustafa Al-Kazemi to end the rail link between the Iranian city of Shalamjah and the Iraqi city of Basra.
Basra Governorate has four other major ports, including Abu Flus, Khor Al Zubair, Al Maqal and Umm Qasr, however, the depths of water and the length of its berths are limited and cannot accommodate large exports, which makes FAO important because it is able to host giant ships.
The FAO project is designed to receive ships with a tonnage of more than 100 thousand tons, which need greater water depths and port berths than is available in the current ports of Basra, and if the Faw port is built as planned, it will be one of the 12 largest ports in the world, It is also the only Iraqi port on the open sea.
For his part, Asaad Al-Rasheed, director of the Faw port project, said that the latter will contribute to the development of the Iraqi economy and increase commercial traffic, which will achieve four times what Iraq collects financially from other ports combined, adding that the main purpose of the port is loading and unloading containers, and the port also includes dozens Berths to meet local demand over the next 30 years, in addition, the port's container terminals will include berths for bulk cargo and berths for general cargo.
The first steps of the project included the construction of the eastern breakwater, and although much progress has been made in constructing breakwaters, the project in general has almost stopped due to financial difficulties. Rashid told the American website: “Our initial plan was to complete the first phase of the port by year 2024 if all goes well and smoothly, "indicating that there is a fiscal deficit of between 3 billion and 4 billion dollars.

In turn, a government employee working for the Ministry of Transport, on condition of anonymity, revealed to the site that neighboring countries had pressured the Iraqi government to stop the project or at least make the work go slowly. He confirmed that the government's excuses regarding funding are "flimsy." It is really the case, so why does the government not seek funding from the big companies that have an interest in implementing the project? "
Rasheed disagreed with the idea that external interference affected the continuity of the project, stressing that what delayed the work was mostly internal matters, and pointed out that given that FAO is an Iraqi port, there is no need to conclude a deal with any other country to move forward in its development.
"The business was going slowly for various reasons, unstable soil, financial shortages and the security situation in 2014 when ISIS invaded northwest Iraq," he added.
As for Sarkut Shams al-Din, a member of the Future bloc in the Iraqi parliament, he said: "Iraqi politicians have worked in the past 17 years to drain the country's wealth and make concessions to neighboring countries to achieve personal and economic gains for their groups."
He continued, "It is important to know that neighboring countries cannot do anything if there are no local politicians doing it for them. The FAO is a project that enables Iraq to be stronger economically, but it will benefit ordinary Iraqis more than political businessmen." You don't want to build huge projects like the FAO because they are a group of thugs and kleptocrats. "
The Faw port plan will include many other projects that will boost Basra's economy, improve the daily life of the people of the province, and establish power and water plants and factories.

Similar topics
»  Al-Kazemi promises to sign new companies to start work at the large port of Faw
» Economic specialist: The Kuwaiti port of Mubarak deprives Iraq of the economic viability of the large port of Faw
» Kuwait: to resolve the issue of Visa and residence with Iraq soon/problem of the port of Mubarak, lies in the preparation of a draft integrated to work together with the port of Faw
» External and internal pressure mounting to remove Al-Maliki
» Maliki's coalition reveals "external pressure" on the largest bloc and moves on 200 deputies