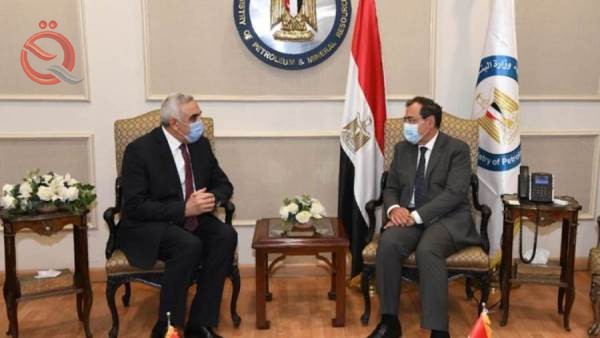 The Egyptian Minister of Petroleum and Mineral Resources, Tariq Al-Mulla, announced the renewal of the agreement to supply Iraqi crude to Egypt for 6 months.

The Egyptian Ministry of Petroleum said in a statement, seen by Al-Iqtisad News, that “Minister Tariq Al-Mulla indicated during his meeting with the Iraqi ambassador in Cairo and his permanent representative to the Arab League, Ahmed Nayef Al-Dulaimi yesterday, that the agreement to supply Iraqi crude to Egypt with a quantity of 12 million barrels for a period of 6 will remain in force. Months which is renewed regularly. "

During the meeting, Al-Mulla affirmed, "The Egyptian petroleum sector's readiness to enhance the presence of its companies in Iraq in the coming period in various activities of oil, gas and petrochemicals, especially that companies establishing oil projects and maintenance have a successful and extended work record and great experience in working inside Iraq."

He pointed out "the possibility of establishing a joint Egyptian-Iraqi company in the field of project implementation to facilitate the entry of Egyptian companies to work in oil and gas projects in Iraq."