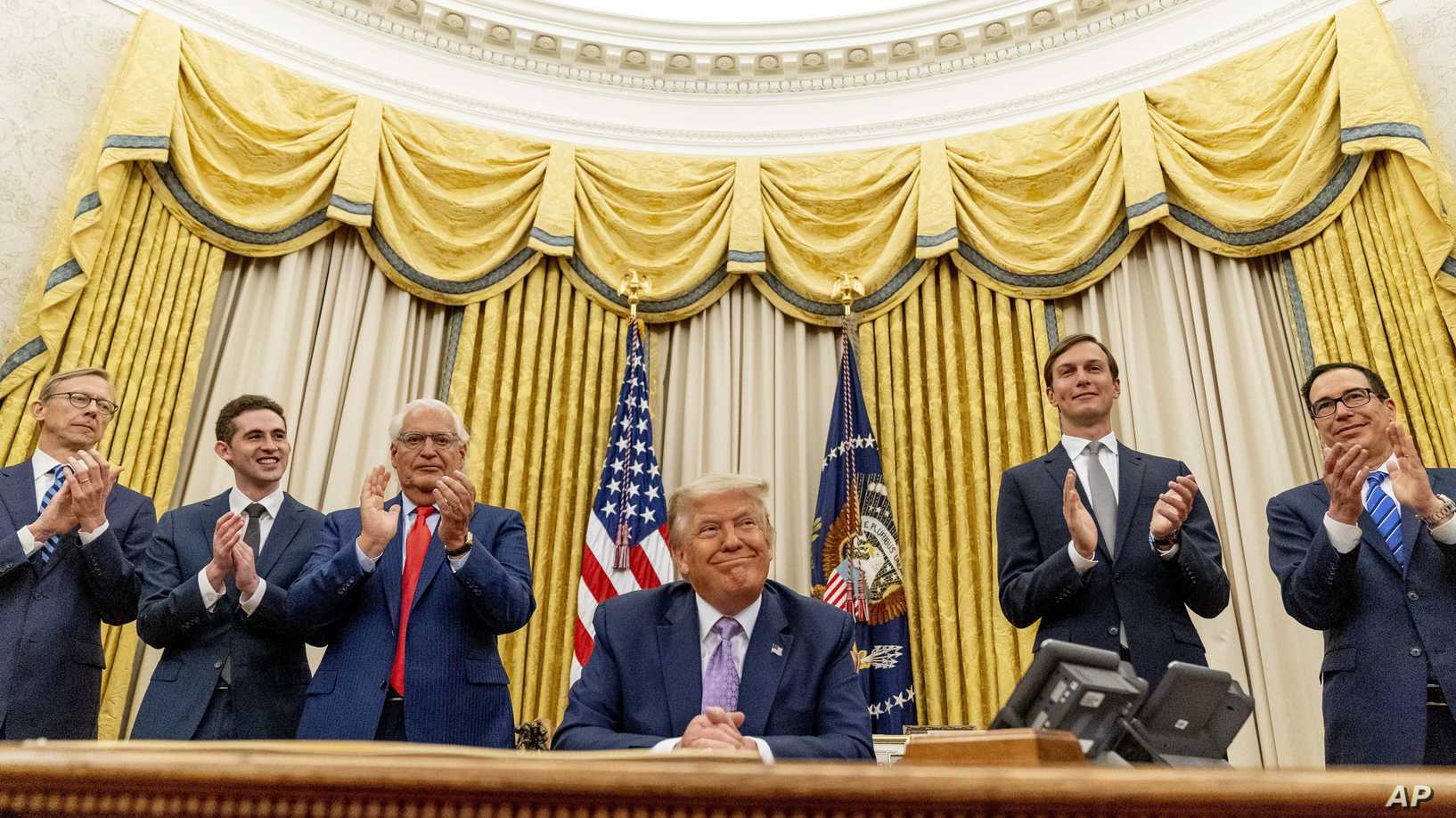 Shafaq News / A "historic" peace agreement announced by US President Donald Trump, on Thursday, between the UAE and Israel, in a step he said would pave the way for similar steps taken by Arab and Islamic countries in the future.
The agreement, which will be known as the "Abraham Agreement", is considered the first of its kind since Israel and Jordan signed a peace treaty in 1994, and among its most prominent provisions is Israel's agreement to suspend the extension of its sovereignty over areas of the West Bank that it was considering annexing.
Observers believe that the Emirati move will encourage many countries in the region to follow the example of Abu Dhabi and conclude similar agreements with Israel in the near future.
"The countries of Bahrain, Oman, Saudi Arabia, and perhaps one day Iraq will go towards peace with Israel," said Richard Goldberg, a senior adviser at the Foundation for Defense of Democracies. According to the American Al-Hurra channel.
"There should have been a first country, thanks to the UAE for its courage to move forward towards a peace agreement with the Israelis," Goldberg added.
He continues, "The Middle East region is developing politically and economically, and there are new threats, including Iran, and many reasons make the countries of the region decide to make peace with Israel for the future of their people."
The UAE Minister of State for Foreign Affairs Anwar Gargash considered the agreement to normalize relations reached by his country with Israel as a "bold step to ensure a two-state solution."
A joint statement was issued by the United States of America, Israel and the United Arab Emirates, stating that the agreement provides for "the conduct of full bilateral relations between Israel and the United Arab Emirates."
Middle East researcher Rawan Manjoula believes that the Emirati move will encourage all Gulf Cooperation Council states to normalize normalization with Israel.
"We will witness more similar agreements, whether with all of the Gulf Cooperation Council countries, which will be attached to the Emirates in addition to Sudan," said Rajoula, who lives in Virginia.
The joint statement issued by the United States, the UAE and Israel indicated that delegations would meet in the coming weeks to sign agreements on direct flights, security, communications, energy, tourism and health care. The two countries will also participate in the fight against the Coronavirus pandemic.
This announcement makes the UAE the first Arab Gulf state to do so and the third Arab country to establish active diplomatic relations with Israel, after Egypt and Jordan.
Egypt had concluded a peace agreement with Israel in 1979, followed by Jordan in 1994. Mauritania recognized Israel in 1999, but later cut ties with it in 2009 due to the war on Gaza at the time.
As for Israel, the announcement comes after years of Netanyahu proud of his government enjoying closer ties with Arab countries than it has openly recognized. 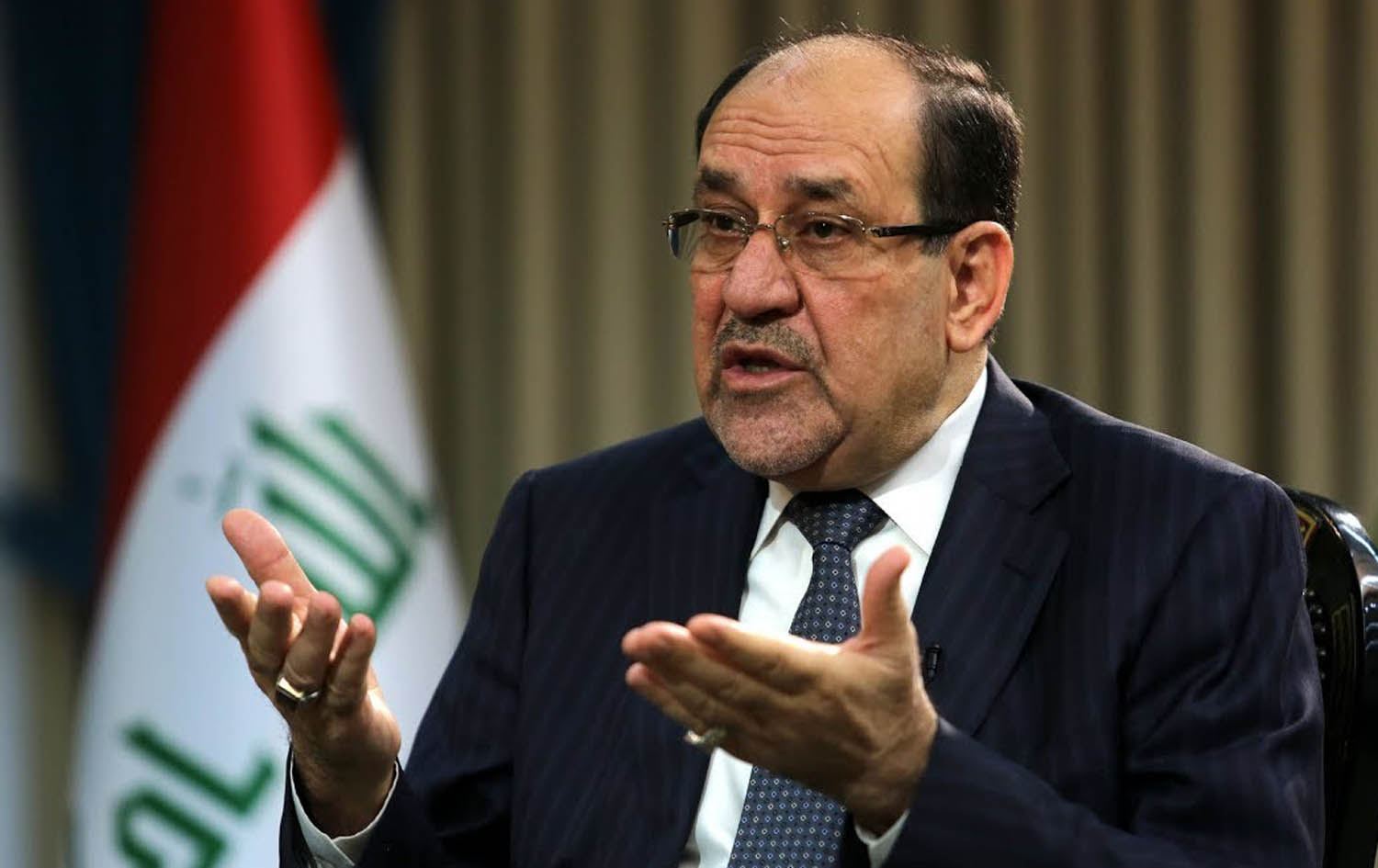 Shafaq News / On Friday, the leader of the State of Law coalition, Nouri al-Maliki condemned the agreement reached by both the UAE and Israel, calling on Arab and Islamic countries to reject it.

Al-Maliki said in a statement Rudd to Shafaq News, "The practical steps of the Camp David project for normalization between the Zionist entity and some Arab governments are still continuing at an insulting and miserable pace ."

He added, "The Arab political system has transcended the limits of Arab and Islamic values ​​by its path of normalization with the Zionists who swore to the blood of Arabs and Muslims and continued to usurp the land and sanctities ."

Al-Maliki also said that "the path of political and economic rapprochement with the Zionists is a betrayal of trust, God and Muslims, and a passage of the sacrifices and the grave sacrifice made by the nation in the face of the arrogance of Zionist extremism and its continuous attacks and its conspiracy against Arabs and Muslims   and the continuing flagrant violation of the just nation’s causes in Palestine ."

And he added, "The cooperation protocol between the UAE and the usurping entity, with US blessing, is nothing but one of the episodes of returning to fixing the scheme of humiliation and dishonor and wasting the legitimate rights recognized by international legitimacy . "

Al-Maliki pointed out that "this step, which was not expected from the United Arab Emirates, confirms the deal of the century that changes the map of the region in favor of the Zionist entity ."

And the leader of the State of Law coalition continued by saying, "This   step is a violation and clear violation of the decisions of the Arab League, the Organization of Islamic Cooperation, the Non-Aligned Organization and other international organizations that have recognized the rights of the people of Palestine over its land and its capital, Al-Quds Al-Sharif, and is also a violation of the bond of religion and brotherhood that binds Arabs and Muslims ."

He concluded by saying, "We call on Arab and Islamic countries to raise their voices in rejecting this Arab political collapse, and we also call on the sons of the Islamic and Arab nations to express their   rejection and denunciation of this very dangerous step and   work to stop it ."

It was announced today, Thursday, that the United Arab Emirates and the State of Israel have reached an agreement mediated by the United States, according to which Israel will stop annexing Palestinian lands, in addition to laying out a roadmap towards the launch of joint cooperation between the two countries, leading to bilateral relations.

Global reactions to the agreement to normalize diplomatic relations between the UAE and Israel varied, in which US President Donald Trump played a mediating role.

Similar topics
» More...CBI Governor: Iraq’s economic future will surprise his friends; Since CH VII, Iraq is open to all competitors wanting to invest in Iraq
» Iraq: Kuwait has received more than $33 billion in compensation so far Posted: July 29, 2011 by THE CURRENCY NEWSHOUND - Just Hopin in Iraqi Dinar/Politics Tags: Baghdad, Invasion of Kuwait, Iraq, Iraq War, kuwait, Persian Gulf, Saddam Hussein, United Na
» Kuwait Ambassador to Iraq: Kuwait opposed to any discussion regarding Port Mubarak; Iraq Foreign Minster says port belongs to Kuwait, not Iraq
» Frank26: "the value will climb at that point internationally...to $3 maybe $4 rate...Iraq will stay 1 to 1 inside of Iraq for your purchasing power" (Iraqi's Will Leave Iraq In Mass Then! LOL) 12/27/21
» Tension increases between Iraq, Kuwait; Iraq MP has opinion there is a conspiracy to keep Iraq under CH VII