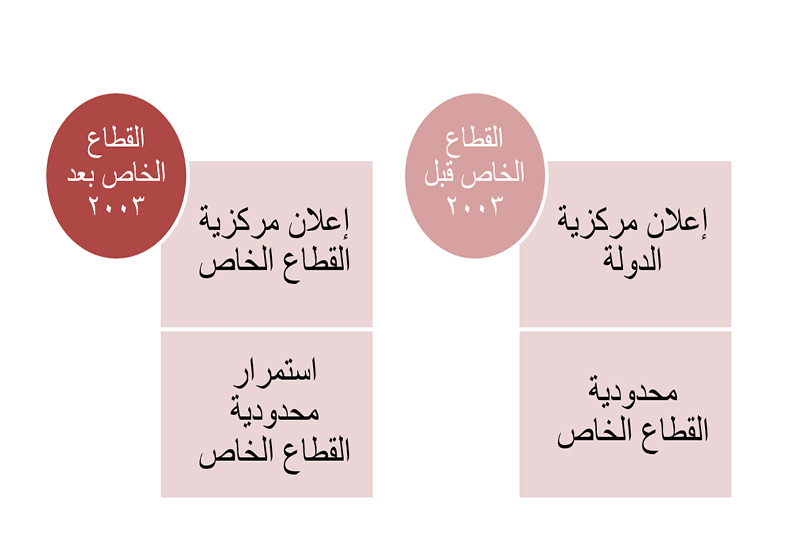 The main idea of ​​this article is to define the role of the private sector in Iraq, especially after the declaration of capitalism as a general trend for the Iraqi economy after the fall of the socialist regime.
Where the general orientation of the Iraqi economy was a socialist trend leading to state management of the economy mainly, but that trend differed in one way or another after the fall of the regime and it became a capitalist trend that gives the private sector the main role in the economy.

Before the fall of the regime in 2003, Iraq adopted central planning since the fifties of the last century to draw up a plan for all economic variables, and the state implements the entirety of that plan, and the private sector has only a minor role and in times of crisis to compensate for the state’s failure and mitigate its severity.
Where the state was exercising the role of overseeing and carrying out some major projects before the revolution of July 14, 1958, through the Reconstruction Council that was established in 1950, which took upon itself the task of supervising government spending and preparing a general economic and financial plan to develop Iraqi resources and improve the standard of living, which means The private sector enjoyed a large degree of independence until the July 14 revolution, because the Development Council’s programs were far from the principle of inclusion and were limited to some major projects [i].

The increasing role of the state

But after the July 14 revolution, the state began to play a major role in the economy in exchange for the radicalization of the role of the private sector and living on the sidelines, as the state canceled the Construction Council, which was exercising the task of supervising as a major task for the state away from direct intervention except in major projects, and its formation of central institutions Which manage the economy, planning and implementation.
The importance of oil wealth in increasing state intervention in the economy and encouraging it to form central institutions cannot be overlooked, as the state cannot form central institutions and intervene in the economy in the way it has become with the availability of large oil revenues, and is forced to open the way for the sector. The private sector to play its role in the economy.
The central institutions established by the state were the Economic Planning Council and the Ministry of Planning, which took it upon itself to prepare economic plans based on the proposals made by the ministries, and submit them to the Planning Council for the purpose of approval and follow-up of their implementation. As for the implementation process, it became one of the tasks of the relevant ministries, and whatever the names and tasks of these institutions differed later, their main task remains managing the economy on behalf of the state.

Oil and the state are one-way

As time advances and oil revenues increase, the state’s intervention in the economy increases according to the principle of inclusiveness through its central institutions, and its role becomes central while the role of the private sector diminishes and becomes a secondary role, and vice versa, but not in the same proportion and proportion, meaning that the picture is not fully reflected and the private sector cannot To completely replace the state.
When oil revenues decline for reasons and others and the state’s financial resources decrease and it is in an unenviable position before the local, regional and international community, and this situation may be the end of its existence, and to avoid this situation and maintain its presence, the state will open the door to the private sector and increase little by little, but no matter how large and heavy it is. It cannot completely and permanently replace the state and its role will remain secondary, because once the oil revenues return to their previous era and rise again, the state will return to its role and position again, and this is mainly due to the philosophy of the economic system adopted by the state.

After 2003, Iraq adopted a new economic trend that is completely contrary to the previous one, and this is what was codified in the Iraqi constitution of 2005, specifically in Article 25, which states that “the state shall guarantee the reform of the Iraqi economy according to modern economic principles in a manner that guarantees the full investment of its resources, diversification of its sources, and encouragement. The private sector and its development
Article 23, first: “Private property is safeguarded, and the owner has the right to benefit from it, exploit it and dispose of it within the limits of the law.”
Article 24, "The state guarantees freedom of movement for Iraqi labor, goods, and capital between the regions and governorates, and this shall be regulated by law."
With those constitutional articles that clarify in one way or another the features of the new trend, the trend towards a market economy, but the reality indicates a clear stumbling in the process of implementing this new approach. Indeed, the previous economic approach is still valid on the ground for many reasons outside the scope of this article [3] , As the economic resources have not been fully invested and waste is still evident in most of its resources, especially natural gas, which “burns about 70% of all quantities of natural gas that are produced in Iraq, instead of locking up and investing it” [iv]
It did not work to diversify the sources of the Iraqi economy, but it is still very focused on the single source (oil) in output, trade and finance, as oil constitutes more than 40% of output and more than 90% of trade and finance, and as a result of oil’s link with the global economy, the Iraqi economy has become a hostage to the outside world. This is because of the state’s hegemony over the economy through its hegemony over oil, land and the banking system, and owning many companies and factories.
The same applies to business freedom, as due to the difficult business environment as a result of the hardening of administrative procedures and the prevalence of corruption in most of the joints of the state that dominate the capabilities of the economy, making the business environment an environment that expels private sector investments, and this is what makes the role of the private sector a secondary rather than a major role.
As the state did not work to overcome the obstacles facing the private sector, which made its role a secondary one despite the announcement of the new trend towards a market economy in which the private sector is the main axis.

Steps to maximize the role of the private sector

After determining the role of the private sector in Iraq as being a secondary role, it is necessary to determine the steps that contribute to achieving congruence between the announcement of the new direction of the Iraqi economy and the economic reality in order to avoid negative discharges resulting from the mismatch, and these steps can be summarized as follows:
First: Combating corruption in all parts of the state to ensure a smooth flow of administrative procedures in general and procedures related to private sector investments in particular.
Second: The withdrawal of the state from the economy and the abandonment of the production elements that dominate it in favor of the private sector, through the principle of equal opportunities and in accordance with the standards of competence and eligibility, away from favoritism and favoritism.
Third: Directing private sector investments towards the economic sectors that contribute to diversifying the sources of the Iraqi economy to release its mortgage in the outside world, by preferring those sectors in terms of benefits, exemptions and guarantees.

Economist to / NINA /: The unemployment crisis is remedied by supporting and activating the private sector

Economist to / NINA /: The unemployment crisis is remedied by supporting and activating the private sector

Baghdad / NINA / The economist, Malaz Al-Amin, called on the government to support the private sector - agricultural, industrial, commercial, tourism, transportation and housing, to remedy the unemployment crisis by creating job opportunities for youth.

In a statement to the Iraqi National News Agency ( NINA ) , the Secretary said : To remedy the crisis of creating job opportunities for young people and absorbing unemployment in general, the government must support the private sector - agricultural, industrial, commercial, tourism, transport and housing ..- indicating that the private sector can absorb tens of thousands of young men and women If it were activated and supported by legalizing imports, granting loans and providing facilities for it in importing its raw materials and exporting its products.

He added: The granting of a number of companies or groups of graduates of the Faculties of Agriculture and Veterinary Medicine areas of land to be used as a project to produce a specific crop and support them with fertilizers, seeds and pesticides and legalize the import of the produced material, we will find that the project will succeed after one year and a large number of young people will be employed in this field along with Attracting other projects for this model, it was a poultry field, calves, or fish lakes. Thus, Iraq possesses fertile land and water, which qualifies it for the success of the experiment and its development and competition with foreign products. ”

He pointed out that“ supporting the private sector needs a package of laws, controls and procedures to encourage and follow it to ensure its success. This is the case in most countries.


He continued that: The housing sector is one of the important sectors that, if properly managed, and the necessary funds have been allocated to them in building new housing units, according to the studies of the Ministry of Planning (that Iraq needs three million housing units by the end of 2022), this sector is capable of a unit to absorb the unemployed from Graduates and others, because he needs an engineer, administrative, legal, carpenter, blacksmith, electrician, and farmer, and the government can allocate lands to establish housing complexes in multiple governorates and grant them to solid foreign or local companies and require them to employ Iraqi workers and other ideas and plans that contribute to absorbing unemployment and not graduating from seeking appointments Governmental /