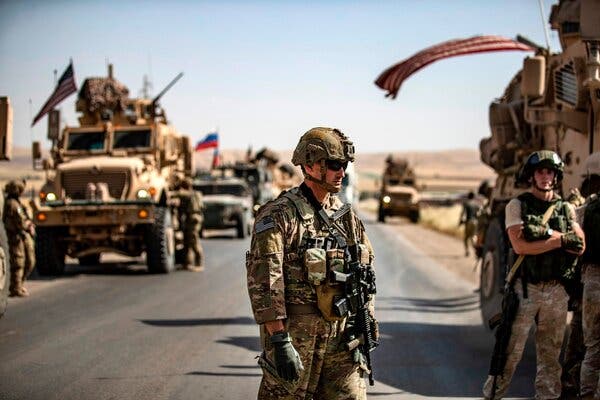 American and Russian troops in June in Syria. American officials say the United States can afford to consider withdrawing troops from Iraq and Syria because local forces are increasingly able to counter ISIS on their own.
Credit...

WASHINGTON — The top American military commander in the Middle East said on Wednesday that U.S. troop levels in Iraq and Syria would most likely shrink in the coming months, but that he had not yet received orders to begin withdrawing forces.
Gen. Kenneth F. McKenzie Jr., the head of the Pentagon’s Central Command, said the 5,200 troops in Iraq to help fight remnants of the Islamic State and train Iraqi forces “will be adjusted” after consultations with the government in Baghdad.
General McKenzie said he expected American and other NATO forces to maintain “a long-term presence” in Iraq — both to help fight Islamic extremists and to check Iranian influence in the country. He declined to say how large that presence might be, but other American officials said discussions with Iraqi officials that resume this month could result in a reduction to around 3,500 U.S. troops.
Despite President Trump’s demand last fall for a complete withdrawal of all 1,000 American forces from Syria, the president still has some 500 troops, mostly in the country’s northeast, assisting local Syrian Kurdish allies in combating pockets of ISIS fighters.

“I don’t think we’re going to be in Syria forever,” General McKenzie told a [size=16]security conference organized virtually by the United States Institute of Peace. “At some point, we do want to get smaller there. I just don’t know when that’s going to be. As long as we remain, we’re going to work very hard to finish off ISIS.”
General McKenzie’s comments on U.S. troop levels in Iraq and Syria were consistent with what he has said in the past, but they come against the backdrop of Mr. Trump recently announcing that forces in Afghanistan would shrink to about 5,000, from 8,600, by the general election in November. The president also directed the withdrawal of about 12,000 troops from Germany, about 6,400 of which would come home and about 5,600 of which would go to other European countries.

While Mr. Trump’s motivations for withdrawing troops vary somewhat from country to country, together they underscore his overarching campaign pledge in 2016 to extract the United States from military commitments overseas.
General McKenzie and other American officials say the United States can afford to consider withdrawing troops from Iraq and Syria because local forces are increasingly able to counter ISIS on their own, with some American technical, intelligence and logistical help.
“Our assessment is that it is a threat but it isn’t an increasing threat,” William V. Roebuck, a career Foreign Service officer who is the Trump administration’s deputy special envoy to the Global Coalition to Defeat ISIS, told the conference in a separate panel. “They’re not able to mount sophisticated attacks or operations.”

But the Islamic State in Iraq is still able to wage a low-tech, low-cost, largely rural — and lethal — campaign, American and Iraqi counterterrorism officials say. While ISIS has not carried out attacks on the scale that it did a few years ago, the number of attacks has begun to grow again.
The Pentagon is reluctant to keep more than the absolute minimum of troops in Iraq because they have been attacked by Iranian-backed militias. An attack on an Iraqi base in March killed three soldiers of the American-led military coalition there, two of them Americans, and wounded 14.
In March, the Pentagon ordered military commanders to plan for an escalation of American combat in Iraq. But the top American commander in the country warned that such a campaign could be bloody and counterproductive and risked war with Iran.

Since then, the United States has consolidated its troops on fewer bases, a repositioning that General McKenzie acknowledged had diverted resources from fighting ISIS. Separately, the training mission has been suspended for the past several months because of concerns about the coronavirus.
General McKenzie praised the government of the new Iraqi prime minister, Mustafa al-Kadhimi, for its initial efforts to counter Iranian-backed Shiite militias that periodically lob rockets at American troops and personnel, noting that U.S. officials must exercise patience with the new government’s fits and starts.
“We’re trying to do everything we can not to inflame the environment in Iraq,” the general said, in an apparent reference to the killing of one of Iran’s top generals, Maj. Gen. Qassim Suleimani, in an American drone strike at Baghdad International Airport in January. That strike enraged many Iraqi parliamentarians, who demanded a complete withdrawal of American troops from the country.

In northeast Syria, American troops are working closely with the Kurdish allies, the Syrian Democratic Forces, to combat pockets of ISIS fighters. General McKenzie said the insurgents had been limited to carrying out “local sporadic violence” east of the Euphrates River, territory controlled by American and U.S.-backed Kurdish forces.

General McKenzie said that ISIS had gained more traction on the western side of the river, controlled by Syrian government troops and Russian forces supporting them. “Generally, west of the Euphrates River, conditions are much worse,” he said.
After the American withdrawal from much of northeast Syria before a Turkish cross-border offensive last fall, Russian military personnel have had run-ins with U.S. troops on highways in the region, particularly near oil fields now controlled by the Pentagon’s Syrian Kurdish allies, breaking agreements between the two countries to steer clear of each other.