Al-Kazemi: We have worked tirelessly to prepare a comprehensive reform paper to revive the Iraqi economy and activate the industrial and agricultural sectors

Al-Kazemi: We have worked tirelessly to prepare a comprehensive reform paper to revive the Iraqi economy and activate the industrial and agricultural sectors 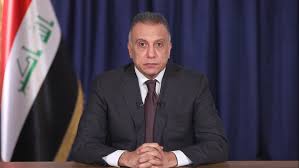 Baghdad News:
Prime Minister Mustafa Al-Kazemi confirmed on Friday that the will of the Iraqi people will change the face of Iraq and remove from it the effects of years of wars and conflicts, stating his pursuit of fair investigation procedures to bring the right and bring criminals to justice and we will not give up this measure until the right returns to its owners

and Al-Kazemi addressed the Iraqi people in His TV address, today, Friday, said, "Your will will change the face of Iraq and remove from it the effects of years of wars and conflicts."

He explained that "from the first day we formed a committee to overcome the obstacles before the Electoral Commission."

Al-Kazemi stated that "various parties tried to push to plunge the country into blood and end its hopes for recovery", pointing to "intersections and internal and regional conflicts that threaten again the security and sovereignty of Iraq."

He said, "Accusations were launched against me personally and against everyone who approaches me before and after the formation of the government." He added, "We faced obstacles for two months in the life of the government, but we focused on the basic goals."

Al-Kazimi added, "We have worked tirelessly to work on a comprehensive reform paper that will revive the Iraqi economy and solve crises."

The Prime Minister noted that "the white paper would introduce projects to address the crisis of unemployed youth and revive the market."

Al-Kazimi added, "There are no solutions to deal with crises without regaining the prestige of the state," adding, "We started with practical steps to invest in gas."

He continued, "We faced the security conflict and the attempt to plunge Iraq into international and regional conflicts."

Al-Kazimi emphasized that "we refused to drag Iraq into the policy of axes."

Similar topics
» A proposal to establish a development tax fund to support the agricultural and industrial sectors
» Al-Kazemi: The security establishment is among the institutions covered by the reform
» Al-Kazemi: The white paper..a comprehensive economic reform approach
» The White Paper for Economic Reform identified private sector investment in all sectors of the economy as a key driver of growth and economic development.
» The gov't is considering granting industrial, agricultural and construction sectors, large sums of money.