The meeting of the Director General of the Department of Empowerment of Iraqi Women in the General Secretariat of the Council of Ministers, His Excellency the Minister of Immigration and Displaced, Vice-President of the National Council for Women Affairs

The meeting of the Director General of the Department of Empowerment of Iraqi Women in the General Secretariat of the Council of Ministers, His Excellency the Minister of Immigration and Displaced, Vice-President of the National Council for Women Affairs

The meeting of the Director General of the Department of Empowerment of Iraqi Women in the General Secretariat of the Council of Ministers, His Excellency the Minister of Immigration and Displaced, Vice-President of the National Council for Women Affairs on the files relating to Iraqi women 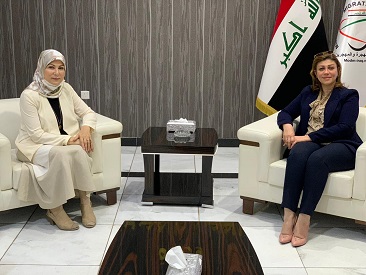 The Director General of the Iraqi Women Empowerment Department at the General Secretariat of the Council of Ministers met with the Minister of Immigration and Displaced, Vice-President of the National Council for Women, on July 28, 2020

The most prominent files related to Iraqi women that were represented in the draft law on protection from family violence and the last stages of reaching it, as well as the file of empowerment of women for women and the joint statement on sexual violence, were reviewed and reviewed the final stages of the draft national policy for women under the framework of UN Security Council Resolution 1325 and subsequent resolutions.

The Director General also outlined common lines of work between the department and the ministry. Her Excellency the Minister welcomed this joint work and stressed the support of all the files of women, especially the support of the Law on Protection from Family Violence and the file of economic empowerment.

She also stressed the necessity of completing the national policy for women to be the umbrella of the work of the National Council for Women, and directed the support of the Women Empowerment Division in the Ministry with logistical capabilities and human resources, and a woman forum will be established in the Ministry that will be an incubator for empowering women in society.

The resolution 1325 (2000) is a UN resolution , adopted unanimously on October 31 , 2000by the Security Council of the United Nations in its 4213 th meeting, concerning the right of women , peace and security. It follows on from resolutions 1261 , 1296 and 1314 which were the subject of a reminder during the meeting and addresses the issue of the condition of women during the repatriation and displacement of populations , as well as that of rehabilitation and of the reintegration of women and girls following an armed conflict 1 .


It is the first formal and legal document to emerge from the Security Council which requires the various parties to a conflict to respect women's rights and to support their participation in peace negotiations and post-conflict reconstruction. The resolution was initiated by Netumbo Nandi-Ndaitwah , then Minister for Women's Affairs of Namibia during that country's presidency of the Security Council 2 .


After lobbying by numerous feminist organizations and the United Nations Development Fund for Women (UNIFEM), the resolution was adopted unanimously 3 .

Similar topics
» COVID-19 Information
» The Minister of Planning discusses with the Minister of Immigration and the United Nations Representative for Humanitarian Affairs, national and international efforts to end the issue of the displaced
» Minister of Finance arrives in Cairo to participate in Arab finance ministers meeting
» The Secretary General of the Council of Ministers opens the Conference on Sustainable Development for the Empowerment of Iraqi Women
» In support of Iraqi women: The General Secretariat of the Council of Ministers is establishing a charity market to support the products of rural women