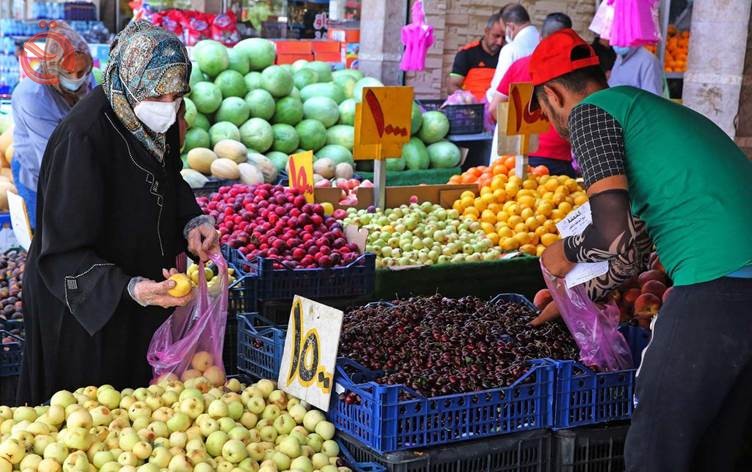 The Food and Agriculture Organization of the United Nations (FAO) released its monthly assessment of the situation in Iraq following the spread of the Corona pandemic, noting that the drop in global oil prices put pressure on national financial resources and generated the need to finance the economic deficit that occurred, and stressed that "price stability remains a challenge , As most retailers remain unsure of future prices. "

The organization said that global food markets are still well supplied and international prices are still relatively stable. Some health checks and quarantines have led to delays at the border and increased transit times and transportation costs.
On the other hand, the conditions of crop development in Iraq were generally favorable with well-distributed and timely rains in the current agricultural year.
It is estimated that Iraq has sufficient wheat stocks to cover its food needs at least until the autumn of 2020 due to the increase in the average local production, and the remaining sugar and oil stocks will continue to be distributed to families registered as weak families with the Ministry of Labor and Social Affairs social protection program.


In response to the growing needs of many families without income during the closing period, the government created a cash disbursement program (grant).
And the Iraqi Central Bank introduced measures to mitigate the impact of the crisis on families and companies, "but there is still a need for a larger stimulus package to restart the economy."
Thanks to the implementation of strict price control measures after the initial hikes, food prices generally started to stabilize starting in April.
The latest data from the vulnerability analysis and planning system indicates that "price stability remains a challenge, as most retailers remain uncertain of future prices. However, overall market performance is improving," according to the FAO report.
And regarding the solutions that the Iraqi government can adopt to get out of the current situation, the report indicated that the government needs to consider preparing various scenarios for its budget depending on the speed of the global recovery and to consider alternative sources of financing and adjustments to spending, re-study regional trade and improve food availability and allocate funds Of the remaining foreign reserves of food imports that can be exploited by private banks and merchants to ensure stable supplies in local markets, create an enabling environment for increased domestic production, and give farmers and workers in the agricultural and food sector exceptions to the closure and curfew investment in productive infrastructure and support for non-integrated sectors In the formal economy, strengthening social safety nets, and improving food security monitoring and control capabilities.
Global food markets remained well supplied, and overall international prices stabilized or fell slightly until May. The average FAO food price index was 162.5 points in May, down 3.1 points (1.9 percent) from April, and reached the lowest monthly average since December 2018.
May's decline witnessed the fourth consecutive monthly decline in the value of the index. All other general index sub-indices recorded monthly declines in May, with the exception of sugar, which rose for the first time in three months.
In response to the World Health Organization's announcement of a global epidemic of Corona virus, the government established the Crisis Cell Committee, headed by the Ministry of Health, and by virtue of Cabinet Resolution No. 55 at the end of March. Each ministry also formed its own crisis cell. The Prime Minister issued Order 151, which specified the membership of the commission. The Council of Ministers also formed the Supreme Committee for Health and National Safety.
Increased financial expenditures have led to a decrease in available reserves to respond to the unexpected economic downturn in light of the Corona Virus pandemic, and at the current spending rate, Iraq is asking for an oil price of US $ 76 per barrel to finance its recurrent expenditures for 2020, and if oil prices stabilize at $ 30- $ 35 per barrel for the rest of 2020 No reform measures have been taken, the budget deficit will exceed 29% of GDP in 2020 and total financing needs will reach $ 67 billion, about 39% of GDP. In this context (scenario), Iraq will have to resort to a mix of domestic and foreign sources to finance the deficit.
Financing the budget deficit and the current account deficit of 18.8% of GDP in 2020 while maintaining the exchange rate linked to the US dollar (which has not changed since 2009) will pressure Iraq’s foreign reserves.
Foreign currency reserves can only cover up to 6 months of imports as of May 2020, "thus exacerbating the country's vulnerability to external shocks and undermining the country's ability to finance food imports and domestic support programs."
The upside of the current financial and monetary pressures is that inflationary pressures are still largely silent due to the availability of cheaper consumer goods. In addition, Turkish and Iranian currencies continue to decline, affecting the main official trading partners of Iraq.
Key inflation, defined as a measure of overall inflation within the economy that includes commodities such as food and energy prices, remains under control at less than 1%.
The public sector remains the most attractive sector for employment in Iraq, so any delay or suspension of the salaries and pensions of its employees, in addition to the low wages of workers in the private and informal sectors, will affect the family food expenditures, food markets and food security of the country, noting the ration courses that were delayed for two months since the beginning of the year.
The Ministry of Labor and Social Affairs continued to distribute one-time cash assistance under the "grant" program. The Ministry of Labor and Social Affairs agreed to grant 11.6 million people out of 12.3 million people who applied at the national level.
By May 9, the Iraqi Grain Board purchased about 1.36 million tons of local wheat from the start of purchase on April 16 to May 19, an increase from the amount of 542,000 tons purchased. This indicates that the harvest has shifted to the northern regions with the highest results.
It is estimated that Iraq has sufficient wheat stocks to cover its food needs at least until the autumn of 2020, with average domestic production increasing, according to the type of wheat purchased.
Domestic wheat production for 2020 is estimated at 4.5 million tons. The import requirement for wheat is estimated at 2.7 million tons, which will be mostly imported as flour (final product) for the marketing year 21-21-2020 (May-June).
The current stock of rice inside the country is about 190,000 tons, compared to two months of ration distribution. On average, Iraq produces about 270,000 tons of rice, and it is estimated that it needs about 1.3 million tons of rice imports, valued at about $ 674 million, according to 2019 price trends.
62% of rice imports are from India, while irrigated rice is produced in Iraq and harvested at the end of October. Domestic and imported rice are not direct substitutes for some of them as they are used for different types of dishes.

FAO noted some expected seasonal price hikes associated with April's seasonal production in some plant components, such as tomatoes, which began returning to their normal prices at the end of May. For example, the increase in tomato prices decreased by 23% in April, by 28% in May.

Similar topics
» President of Baghdad Chamber of Commerce: Iraq seeks to reach the World Trade Organization
» Sumo: Iraq faces a major challenge in preserving its customers due to the oil price war
» Finance Minister Sameenara held in Lima for the stability of oil between Iraq and security challenge
» Iraq to sell crude oil in local currency depends on the stability of the general situation of the country as well as the stability of the Iraqi dinar exchange rate and recorded as currency global.
» 2018-2022 development plan stimulated the economy and accommodate private sector