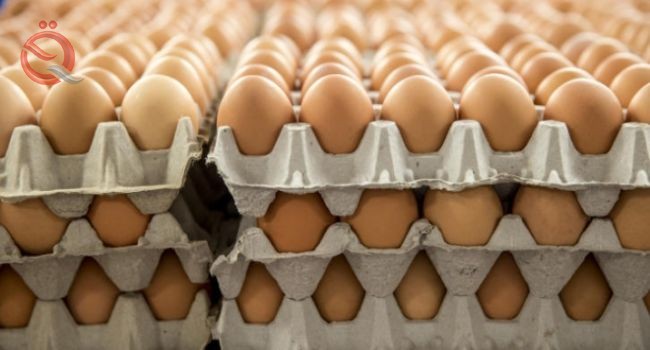 Table eggs production rates in Karbala Governorate increased after the table eggs projects in Karbala Governorate sold approximately (16) million eggs during the current month, which led to filling the need of local markets for table eggs and preventing the entry of imported eggs through the directives of the Ministry of Agriculture.
The director of Karbala’s agriculture, Razzaq Al-Ta’i, said in a statement seen by “Al-Iqtisad News” that “the Ministry of Agriculture prohibited the import of eggs after the self-sufficiency was achieved through the projects implemented with the support of the Ministry of Agriculture through agricultural initiative loans, so the production quantities of table eggs increased through these Projects ”.
Al-Tai added, “Most of the table egg projects that were established in Karbala by the agricultural initiative operate by cage system and number (7) projects, produced during the period from mid-June to mid-July (15) million and (842) thousand and (62) An egg with a red color.
He explained, "The number of chicks involved in these projects reached (820,855), of which (17,600) were in the breeding stage and (644855) in the production stage."
Al-Ta’i pointed out that “the Ministry of Agriculture stopped importing eggs from outside the country in support of the national product, and also provided feed and veterinary treatments at subsidized prices in addition to supporting these projects with interest-free loans at the beginning of their establishment through the agricultural initiative of the Iraqi government, calling on the owners of the fields to“ provide the product For the local consumer at affordable prices. ”
He pointed out that "Karbala was able, through the agricultural initiative, to establish a number of table egg projects and broiler chickens through cage culture and terrestrial farming, and was able to achieve great success, which contributed to satisfying the local market's need for table eggs and poultry meat and achieving self-sufficiency."