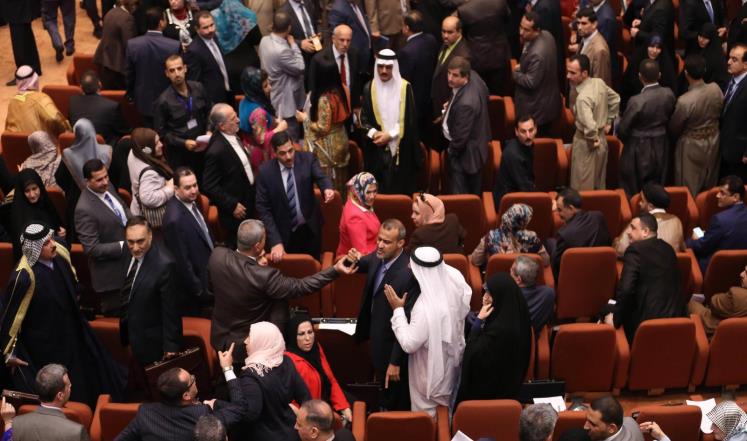 
Member of the Parliamentary Integrity Committee, Alia Nassif, revealed today, Friday, a conflict that is currently taking place between the political blocs over the management of the Central Bank, the Baghdad Municipality, the authorities of integrity and investment, etc., as well as special grades, pointing out that the last parliamentary bloc has been formed, in reference to the "Iraqis" Headed by Ammar al-Hakim, it is to support the government of Prime Minister Mustafa al-Kazemi, and in return it is to obtain positions in independent bodies and special grades.


Nassif told Al-Ikhbaria that "a parliamentary bloc was formed recently with a deal that includes the support of Prime Minister Mustafa Al-Kazimi in parliament in order to obtain the positions of independent bodies and special grades," in a clear reference to the Iraqi bloc.


Nassif stated that "the prime minister is currently in real trouble, as the last announced bloc has informed al-Kazimi of his support, provided that there is a quota allocated to it from the positions of agents, general managers and others."


She pointed out that "partisan quotas are trying to divide everything", stressing, "There is a struggle for independent bodies, including the management of the Central Bank, the Integrity Commission, the Investment Authority, the Baghdad Trust, and others."


"I am in favor of the electoral entitlement that requires the distribution of ministries, but the administrative apparatus cannot be distributed and dismantled, and the quotas for the smallest jobs reach the service factor between the parties and they are changed in the light of quotas."


She stressed that "Al-Kazemi is brave, but he indulged in partisan demands and complied with her demands," stressing that "the administrative apparatus should not be included in quotas between parties."