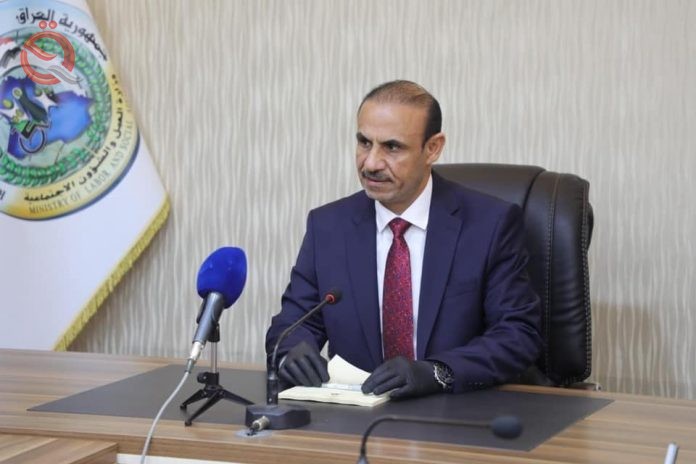 The Ministry of Labor and Social Affairs revealed, on Wednesday, that the online platform of the Retirement and Social Security Department will stop corruption cases, limit the number of national and foreign workers, and add 500,000 workers to the Pension and Social Security Fund.
The Minister of Labor and Social Affairs, Adel Al-Rikabi, said in a statement reported by the official newspaper Al-Sabah and viewed by “The Economist.” From financial benefits to the retirement and social security fund through the electronic payment file, confirming that workers wishing to withdraw the amounts allocated to them at the end of the service through a password for each worker.
Al-Rikabi added, “The platform has created a database for more than 34,000 workers in the private sector, allowing companies owners to provide their data through the electronic window, in addition to updating the data of registered projects and companies,” noting that it will “add about 500,000 workers in the private sector to The retirement and social security departments, in addition to that they will eliminate the corruption cases carried out by the following persons and reduce the workers ’reviews in light of the outbreak of the Corona epidemic, especially those working in the provinces, in addition to disposing of paper uses in the transactions of secured workers and updating their data.
Al-Rikabi stated that "the platform will provide knowledge of the numbers of workers working in the private sector companies officially registered as national and foreign workers, noting that the ministry previously used electronic platforms to conduct transactions with disabilities and special needs and distribute emergency grants for the unemployed and proved successful in their use and achieved the desired goals Noting that "the Department of Retirement and Social Security called on all projects and companies registered to update their data via an electronic link to approve the updated data, noting that the platform will deal with the payment of corporate wages in the framework of reducing the work routine."
He pointed out that "the ministry decided to exempt private sector projects from the late fines until the first of July this year, given the current conditions the country is going through," stressing "work to enhance the revenues of the Social Security Fund to serve the secured workers, especially since the ministry is working to maximize and increase the fund's resources Through investment projects that serve the country and achieve profitable benefits, provided that they are implemented in accordance with the legal controls and contexts used in this regard. ”

Page 1 of 1
Permissions in this forum:
You cannot reply to topics in this forum
Who is online?
In total there are 96 users online :: 1 Registered, 0 Hidden and 95 Guests :: 3 Bots

Yesterday at 9:01 pm by kenlej

» Judy: "On Fri. 26 Nov. Colombia, Brazil and Mexico would begin exchanging currencies" (Brucie...New Intel For You And Your Gullible Followers! LOL) 11/26/21

» MarkZ: "Yesterday we saw continued movement of tier 4a. Whales continue to be in position on Thnnksgiving" (Oh? But You Said The Whales Were Paid. Can't Keep Your Story Straight? LOL) 11/26/21

» Judy: "On Mon. 22 Nov. 2021 the UN, along with their International Monetary Fund, World Health Organization and World Bank were all dissolved" (Oh? Then Why Are They Still There? LOL) 11/25/21

» Bruce: "I bring you the news from sources in the main banks or other intelligence sources" (Holly Has Intelligence??? LOL) 11/25/21

» The joint operations of / NINA /: The date for the withdrawal of US combat forces is fixed and not subject to extension / expanded