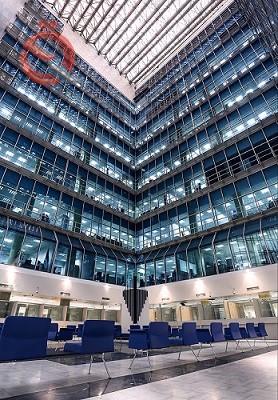 On Thursday, the central bank announced the details of its contribution to facing the financial crisis, while it expected to pay the salaries of employees early next week .
Ihsan Shamran, Director General of Accounting at the bank, told the official agency that "the central bank has a big role in facing the current financial crisis, confirming the re-deduction of bonds in favor of the Ministry of Finance by about 8 trillion dinars ."
He added that "these bonds will enable the ministry to secure the salaries of employees for the months of July and August," noting that "the bank has made it easier for the Ministry of Finance to process the debt repayment for a period of 10 years ."
He continued, "The Ministry of Finance held talks with the Central Bank and some banks to re-discount these bonds," noting that "the bank met with the finance and banks and deducted these amounts and deposited them in the Rafidain and Al-Rasheed accounts and the retirement board ."
He suggested that "the salaries of employees be paid at the beginning of next week," noting that "the central bank stands with the government to support the public finances from any crisis that it may face ."
Shamran predicted, "the financial crisis will ease with the recovery of world oil prices," noting that "the state is working towards improving public financial resources through the activation of taxes and customs in addition to oil resources ."