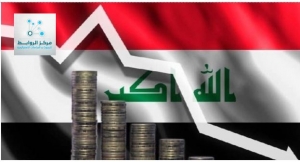 
Although the new government was able to secure the salaries of employees, the financial problem remains essential in the Iraqi economy, and its viability and sustainability in light of the fluctuations in international oil prices that cause the financial deficit of the Iraqi budget, which mainly depends on oil revenues, and the high volume Public debt, as well as risks arising from unfair budget distribution; Based on the political agreements in distributing public expenditures to the governorates and the region, as well as the low allocations of the investment budget, as well as the deterioration of public sector companies and their transformation from profitable producing companies to losing companies.


Looking at all budgets after (2003), it is noted that fiscal policy is not based on macroeconomic development, but rather in a large part of it directs resources to the operational side of the general budget.


Likewise, the lack of institutional harmony and the escalation of the specter of quotas, in addition to the security threats that the country is constantly passing through. Reflecting on the social side, many problems, especially those related to citizens in general, included the spread of alien ideas on society, with cases of moral corruption, family disintegration and other social problems expanding.


This makes the solution to these problems a real crisis facing the political administration in the first place because it has the decision in that, in addition to the great necessity of specialized scientific consultations for each problem separately.


Iraq incurred heavy financial losses due to the deterioration of oil prices resulting from the Corona epidemic, as Iraq prepared for the 2020 budget with a deficit of 50 trillion dinars, equivalent to 42 billion dollars. This account was based on a price of $ 54 a barrel of oil.


But the shock of the epidemic and the differences between OPEC + members led to a sharp drop in the price of crude, which reached at the end of March to $ 23, which shows the vast difference between the low price that reached the oil mechanism and the approved price in the budget of $ 34. As Iraq's exports are 3.8 million b / d, the daily loss will reach $ 129 million.


It is a huge loss because oil revenues represent 89% of general budget revenues and 99% of total export earnings. The draft budget was recently modified, and the approved price has become $ 30 per barrel. But this measure will not address the serious consequences of the financial crisis.


The high public debt, according to officials and specialists, has exacerbated public debts amounting to $ 125 billion, equivalent to 56% of GDP. Even the external debt will not be easy due to the Corona global crisis, and the credit rating of Iraq is very weak. He obtained a "negative B" score by Fitch and Standard and Powers, and most importantly the loss of confidence in economic policy. Experience has shown that the funds granted after the elimination of ISIS were not used in an acceptable manner in the reconstruction.


Here we come to important facts that must be placed within the plans of the state and to benefit from crises and the lessons we draw from to correct the path of economic reform in Iraq:


كور The Corona pandemic has proven beyond any doubt that countries that depend on importing food, medicine and health equipment are suffering from a serious crisis, especially if their financial viability is limited. The risk increases as this dependence increases. And dependence on exports that finance imports on a single substance, such as oil, whose price has rapidly deteriorated. And Iraq is at the forefront of the countries that meet these specifications.


• To address the current financial crisis, the Iraqi government must follow various steps, including: encouraging local agricultural and industrial investment, and providing various forms of support for this production through more public spending on scientific research and technological development, focus on all sectors and consider them complementary to each other and important for a strong state .


• Giving a large role and encouraging the agricultural sector and considering it one of the most important sectors and restoring life to Iraqi agriculture by adopting the project (who plantes owning the land) and this means whoever wants land should strive to obtain it and organize that by a specific law that guarantees non-exploitation and criminalizes its distribution to residential provinces.


• Setting new investment decisions that help investors to work even if the interest is low in the first place, but it will recover if this investment succeeds in a specific region or province, for example, we may lose the land, but we gain 5,000 jobs in almost every new project to eliminate unemployment and employ the workforce In order to eliminate or at least start reducing the level of poverty in Iraq because it has become a dangerous level.


On the other hand, so that the state can surround the problem well and treat each problem mainly from the political side, drawing the public policy based on the principles of real extrapolation of the problem is what avoids us falling into unrealistic or unrealistic treatments, and from these steps that can be addressed The financial crisis, adopting an economic policy for the Iraqi state that depends on the fundamentals of capitalist work, where the problems that arise show that there is a lack of coherence or harmony between the democratic political system and the socialist economic system, and for example it must shift in the governmental banking system from traditional to electronic and this avoids the state to continue circulation Al-Aini for Money This makes the liquidity in banks continuously while adopting awareness programs for citizens on saving.


And giving great importance to the private sector and placing it within a legal framework, in order to guarantee its employees after-service rights, and this reduces government burdens significantly, especially in the matter of appointments, as 80% of those requesting employment aspire to obtain pension benefits that guarantee their lives.


The most important is coordination between the two sectors (public and private) in the law for the employment of government workers in private companies and deduction of their salaries from the company, for example, workers of military manufacturing companies or companies that are suspended from work, such as iron and steel company workers, while ensuring that they are not exploited by companies by a specific legal protocol.


We reach an important conclusion, which is the necessity of reforming the fiscal policy so that it gives special importance to the health, education, social and other services sectors, as well as to local industrial and agricultural productive activities.


Setting plans that adopt a policy of economic spending in important fields that transform this policy, the ability to respond to health crises and without addressing urgent financial problems, and it has become necessary to make fundamental adjustments to them by reducing military and security spending, and making the regular army sufficient and strengthening it, and totally dispensing with the endowment bodies of all religions and sects and limiting their tasks. However, the state is minimalistic.


And poverty, which has become a dangerous level, must be addressed, as it constitutes a third of the Iraqi population. These ordeals can only be taken advantage of after all the obstacles of state administration are eliminated so that the country can rebalance again.