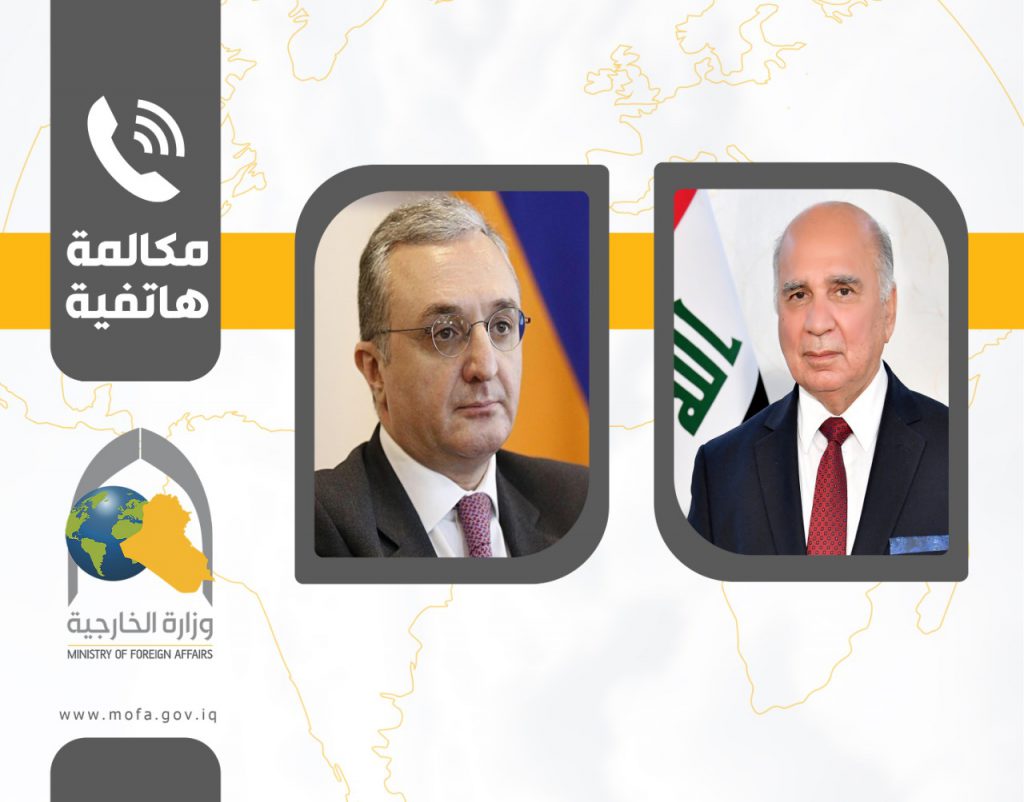 Foreign Minister Fuad Hussein affirmed the depth of the bilateral relations between Baghdad and Yerevan, calling for the creation of new spaces that would achieve the common interests between the two countries.
This came in a telephone call received by the Minister from his Armenian counterpart, Zohrab Manatsakanian, to congratulate him on the occasion of his assumption of the post of Minister of Foreign Affairs of the Republic of Iraq.
The Minister indicated that Iraq is a diverse nationality, and that the Armenian community is an effective part of the Iraqi society.
The Minister stressed the necessity of communication regarding the activation of trade, and Iraq’s aspiration to raise its size in the framework of achieving common interests, expressing the government's willingness to discuss with the Armenian side in the security field.
For his part, Mr. Zohrab Manatsakanian, the Armenian Minister of Foreign Affairs, confirmed the sobriety and depth of his relations with officials in the Iraqi government, and the depth of historical relations between the two countries.
Expressing his aspiration to expand the fields of cooperation between the two countries in various fields, including: agriculture, education, and diplomatic work.
They also discussed the Corona pandemic, its economic and health implications, and the urgent need for international cooperation to find solutions and return to normal life.
The two sides discussed a number of regional and international issues of common concern, and the Minister called on the Armenian side and all friendly countries to cooperate in the field of enhancing the principle of dialogue in dealing with problems, and respecting Security Council resolutions and international agreements.
He pointed out the importance of achieving stability in the Middle East, ending interventions, and working to rebuild economic and social life, in a sign of the need to respect the sovereignty of Iraq, and not to allow interference in its internal affairs.
Noting that terrorist groups seek to cause problems and destabilize the regime in the Middle East region; This requires addressing this threat, which affects the entire region.

Most users ever online was 2065 on Mon Apr 09, 2012 5:34 pm
Latest topics
» IRAQ STRESSES THE NEED TO REACH AN AGREEMENT THAT WILL ACHIEVE BALANCE AND STABILITY IN GLOBAL MARKETS