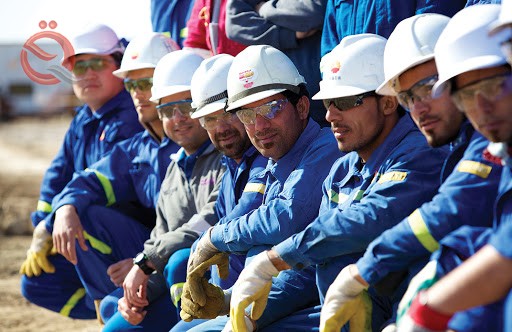 On Wednesday, Basra Governorate issued 8 new procedures regarding companies working inside the governorate, including requiring companies to return workers who were recently dismissed from the Corona crisis, as well as replacing foreign employees with other residents of the province.
"The governorate has decided to return all employees of the Basra governorate from those whose contracts have been terminated, those who have been suspended from work, or have been sent with unpaid mandatory licenses, regardless of their approval," said Mohammed al-Abadi, director of the employment office in the governorate's office. Or their lack of approval of the books sent to them in this regard by the management of their companies. "
He referred to "replacing foreign employees in many of the administrative and leadership locations in the company with local employees exclusively from Basra Governorate who have conditions of years of service, competence and necessary qualifications in all administrative and engineering departments in this company, so I must provide a list of employees of each department, both local and foreign, with Attach all information about every employee from a place of residence, years of service, university qualifications, and others, for the purpose of initiating a replacement mechanism, which in turn will benefit the company as a reduction in the costs of recruiting workers and also showing goodwill for Basra Governorate and its citizens.
"In the event that it possesses valid and ongoing contracts, the company is not allowed to take any action to end services or stop work or unpaid permits against its local employees from Basra Governorate ... In the worst conditions, other measures such as those taken by some companies should be resorted to."
He explained that "in the event of exceptional circumstances, it is necessary to start first with reducing the giant salaries of foreign workers by half or more, as well if they require layoffs or suspending their work ... And then it is possible to take a measure against local employees to reduce salaries by a certain rate temporarily until the removal of the exceptional circumstances."
Al-Abadi pointed out that "the divisions whose contracts have expired or stopped are evaluating their future status by forming a joint committee between the company's management and the central operating office in Basra governorate to decide the fate of local employees from Basra governorate and find solutions such as .. transfer them to other departments and take advantage of their services and in the absence of availability Places for them in the rest of the departments, their salaries are deducted at certain rates every 3 months, such as 25% and then 50% if the situation remains and for another 3 months, after which the situation is evaluated again by the formed committee, especially for employees who have more than 5 years experience in the sector The oil and more than 3 years in the same company, to work in the principle of job security and applied in all countries of the world, including neighboring. "
And that "any decision taken by the company's management against the local employees from Basra Governorate must be discussed in detail with the local government in the Basra Governorate represented by the central operating office and this is done by submitting an official request by the company."
The director of the employment office at the Basra Governorate Office stressed that "the new jobs will be exclusively for Basra Governorate and its citizens, and by adopting more than one document for the applicant, and the jobs should be, and in the absence of the required specialties within the province, it is required from the rest of the provinces."
The Basra administration also decided to "conduct a comprehensive count of the number of employees in the company with a description of the number of foreign workers and the reason for their recruitment in the event of similar competencies from the local labor. Also, the numbers of employees from outside the Basra province must be indicated as well ... and determine the proportion of employees from Basra Governorate compared to the total number of employees of the company The pledge will increase the number of employees from Basra Governorate in a short period of time. "