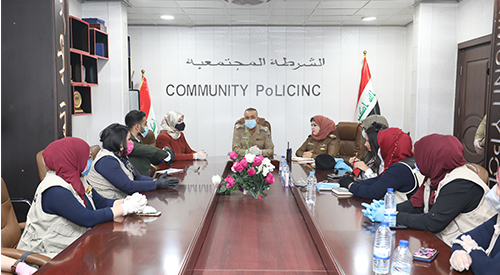 The Director General of the Women's Empowerment Department discussed in the General Secretariat of the Council of Ministers, Dr. Ibtisam Aziz, with the Community Police Officer at the Ja’ifar Police Station, Brigadier Ghaleb Al-Attiyah, a file for developing the capacities of women in the Community Police Directorates in Baghdad and the provinces .

Brigadier General Ghaleb Al-Attiyah presented, during the meeting, a summary of an expanded study on the challenges facing women's work in the fields of social services, the most prominent of which are: the imbalance between the size of the tasks assigned to the community police and the small number of female staff, especially in the governorates, and the urgent need to provide places for female employees; In order to maintain the smooth flow of work .

The study included a set of recommendations represented in the need to volunteer new staff, or transfer female employees from the institutions of the Ministry of Interior; To run the tasks of the community police directorates, and the need to provide technical support through the use of the competencies of civil society organizations .

On the other hand, the Director General of the Women's Empowerment Department commended the General Secretariat of the Council of Ministers, Dr. Smiling dear, on the efforts of the female police officers in the community police, and their role in supporting the Iraqi family in light of the current epidemic crisis, and helping it to confront negative phenomena and overcome them to the fullest .

She emphasized the importance of integrating the concept of gender in the state's plans and programs, and addressing the forms of violence against women such as: incidents of domestic violence, rape, sexual harassment of minors, and suicide associated with the victimization of the husband; The result of harmful traditional practices, early marriage, protracted displacement, poverty, limited financial resources, lack of safety and security, and unbalanced gender relations .

Dr. added. Smiling dear, that the government program of the Prime Minister, Mr. Mustafa Al-Kazemi, has been concerned with developing the ability of women in all fields to reach decision-making centers by indicating the need for special attention to the empowerment of women and enhancing their role and presence in society .

She indicated that the Women Empowerment Department seeks to amend laws and legislations. To lift discrimination against women in a way that serves family unity and society, and it has revealed close to presenting the draft law against domestic violence to the Council of Ministers for the purpose of submitting it to Parliament; For the women's activity in the community police formations to be under a legal umbrella, showing the department's readiness to provide support; To build structures and practical strategies that serve the achievement of the desired goals .

It is noteworthy that the Women Empowerment Department, in the General Secretariat of the Council of Ministers, issued - earlier - a special report measuring the impact of the current epidemic crisis on increasing incidents of gender-based violence in Iraq, and with the participation of the United Nations Population Fund (Unfpa) , which adopted sponsorship Monitoring and evaluation processes .